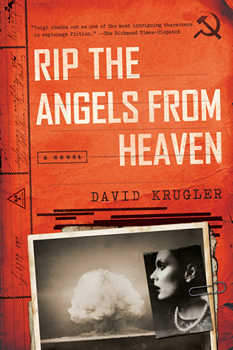 Intelligence officer Ellis Voigt fights to prevent the Soviets from infiltrating the Manhattan Project while running from enemies on both sides, in the thrilling sequel to The Dead Don’t Bleed.

Washington, DC, 1945. Lieutenant Ellis Voigt of the Office of Naval Intelligence is desperate to keep the secrets that threaten his life. The war overseas is going well for America, but Voigt can’t escape a web of double-agents and undercover spies who follow his every move.

The FBI suspects that he is the communist who murdered a naval officer in a Washington back alley. The Soviets believe he’s holding back information from their contacts, and they’re willing to use any means necessary to extract it.

When Voigt is sent to New Mexico on a secret mission to identify a Soviet spy, he is tailed by both the FBI and the Russians, and is running out of people he can trust. As the team at Los Alamos prepares to test an atomic bomb in the desert, Voigt faces the dilemma he’s been trying to avoid: he can stop the Soviets from getting the bomb or he can save himself―but he might not be able to do both.

RIP THE ANGELS FROM HEAVEN author David Krugler took time out of his busy schedule to discuss his novel with The Big Thrill:

I want them to feel both the excitement mounting in Washington, D.C., as World War II comes to an end and the anxiety building within U.S. intelligence agencies as they realize just how deeply the Russians and their agents have penetrated the atomic bomb project. I hope readers will finish the story wondering just how much of the story was true and how much I made up.

By building its storyline and major characters around the Office of Naval Intelligence, RIP THE ANGELS FROM HEAVEN offers readers of espionage thrillers a look at the operations of a little-known but significant intelligence agency. Figuring out a way to plausibly connect the Office of Naval Intelligence to the Manhattan Project was a rewarding challenge, and I think readers already familiar with novels featuring WWII spies will appreciate this fresh approach.

I had to do a lot of biographical research because many of the characters featured in the novel were real and famous. The most surprising fact I learned? Robert Oppenheimer, the physicist who is considered to be the father of the atomic bomb, once tried to poison a tutor with an adulterated apple! Nobody was hurt, and Oppenheimer wasn’t expelled from school–but what if he had been? Would he have gone on to help build the atomic bomb? The “what ifs” of history raised by my research are fascinating to ponder.

I’ve included a real-life spy in the plot and at one point, he will be brought in for interrogation as the hunt for my fictional spy intensifies. Will this real-life spy get caught too or will he escape attention, perhaps to resurface in another novel?

Philip Kerr, for creating such a complex, conflicted, but basically honest character in Bernie Gunther, and for setting a fine example of creating an authentic historical world and mood for his novels; Eric Ambler, for his finely wrought, careful plots; Patricia Highsmith, for her ability to create slowly building suspense over the course of a novel; and Donald Westlake writing as Richard Stark, for showing us that stripping a crime plot and narrative down to the basics can actually make the story and characters more memorable and striking. 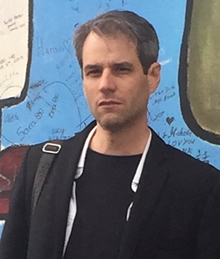 David Krugler, historian and novelist, grew up in Wauwatosa, Wisconsin. After graduating from Creighton University, where he studied creative writing, he earned a M.A. and Ph.D. in history from the University of Illinois at Urbana-Champaign. He now teaches American history at the University of Wisconsin—Platteville. He has published works of nonfiction on several different topics: Cold War propaganda, nuclear warfare, and racial conflict in the United States. His first novel, The Dead Don’t Bleed (Pegasus Crime, 2016), a World War II spy thriller set in Washington, D.C., came out in 2016. The sequel, RIP THE ANGELS FROM HEAVEN, will be released on July 3, 2018.