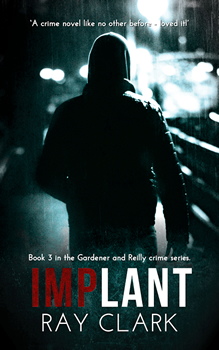 Bramfield, near Leeds, a sleepy little market town nestled on the borders of West and North Yorkshire.

Monday morning, as the clock strikes 9:00, Detectives Stewart Gardener and Sean Reilly discover the naked corpse of Alex Wilson nailed to the wall of a cellar in his uncle’s hardware store. His lips are sewn together and his body bears only one mark, a fresh scar near his abdomen.

Above his head are two plain white envelopes. They do not contain any answers – only further problems, especially when they find out the scar is hiding a very sinister secret.

Within twenty-four hours, they have one body, one suspect – with a motive but no evidence – and a number of other possible suspects.

But they’re all missing.

Within forty-eight hours, their investigation results in dead ends, more victims, no suspects and very little in the way of solid evidence.

Gardener and Reilly have a problem and a question on their hands: are the residents of Bramfield prepared for one of history’s most sadistic killers, The Tooth Fairy?

The Big Thrill caught up with Ray Clark, to discuss his latest novel, IMPLANT:

Mainly because of the vivid imagery and techniques I use to plant pictures in people’s minds, and to promote the fact that what I am proposing can happen is within the bounds of reality. The message I would like readers to take away is, life is precious and we should not take anything for granted: life can be taken away from us in an instant no matter invincible you might think you are.

I believe the story has strong characterisation and pays particular attention to the medical industry, combined with modern technology, utilising a seamless blend of fact and fiction that help to support a very strong storyline and show how vulnerable we all are – even if it is a routine trip to the doctor.

I simply love writing stories. Having now immersed myself in the IMP series, featuring D.I. Gardener and D.S. Reilly, I feel very comfortable in the crime genre. Sometimes I like to mix things a little and add some real horror, which then throws it into cross genre and we start to cross boundaries. With IMPLANT I wanted to write a modern technological, medical thriller. I wondered how far we could go with modern technology and would it be possible to remotely hurt or even kill someone if you were nowhere near them?

To be perfectly honest, I think it’s the fact that anything is possible: never underestimate your enemy.

Peter James has always influenced me because of his vivid imagination, seamless writing and attention to detail with extensive research. Peter always tends to raise the bar with his work, which keeps me on my toes. Another of my favourite writers in the crime genre is Peter Lovesey, another writer whose attention to detail make his books a riveting read.