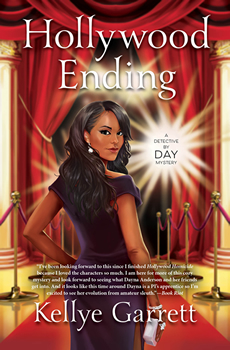 Kellye Garrett grabbed the attention of the mystery community when her first novel, Hollywood Homicide, delighted readers and won the 2017 Agatha Award for Best First Novel, the 2018 Lefty Award for Best Debut Mystery Novel, and the 2018 Independent Publisher (IPPY) Award Gold Medal for Best First Book. Since then, Garrett has been nominated for additional awards, including the Anthony and Macavity awards for best first novel, and her second novel in the Detective by Day mystery series, HOLLYWOOD ENDING, was just released this month.

The Big Thrill recently sat down with Garrett to talk about her exciting first year as a published novelist and her most recent release.

The Detective by Day mysteries are engaging, funny whodunits—not hard-boiled stories like we so often see with crime novels set in Hollywood. What drew you to the traditional mystery genre?

I’ve loved mysteries since I picked up my first Encyclopedia Brown story as a kid. When I was around 12, I discovered Joan Hess and Jill Churchill. I have a very overactive imagination so it’s hard for me to read darker stories, especially ones centering on abuse or twisted serial killers. Traditional mysteries allow me to get my whodunit fix while still being able to sleep at night.

I consider my book to be a funny beach read, so I hope that they use it to just get away from their problems for a while and be immersed in what it’s like to be a semi-famous, mega-broke, retired-at-27 black actress in Hollywood.

You’re a veteran television writer who has worked on programs such as Cold Case. What led you from writing for television to writing crime fiction? How has your background informed your mysteries?

I always wanted to write a mystery but never had a good idea. It came to me while driving down the street in LA when I was dead broke. I saw a sign offering a reward for info on a murder and thought, “I should try to solve that for the money.”

There are certain elements of TV writing that I still use to write my books. Because you have such a limited air time, every scene has to move the story forward. And you also have Act Outs, where you end each scene before a commercial on a climax or big reveal so people will sit through commercials. So my books tend to be very fast paced and plot based. Plus, I try to end every chapter on a high note so you hopefully want to read “just one more chapter.”

HOLLYWOOD ENDING was named one of Book Riot’s 2018 Mystery & Thrillers to Be Excited For, and its predecessor, Hollywood Homicide, received a starred review from Publishers Weekly. Reviewers and readers alike love your characters, especially your protagonist, Dayna Anderson. What was your inspiration for Dayna? What elements of her past have made her the woman she is today?

I started the book when I was in a weird transitionary period of my life where I knew I didn’t want to write for TV anymore, but I wasn’t sure what to do next. If you read the first book, you get the sense that Dayna is lost career-wise herself. I definitely took that from my own life. Write what you know, right?

I’m one of literally a handful of black women who write traditional mysteries with black female main characters.

You’ve been an outspoken advocate for more diversity in crime fiction, especially the traditional mystery market. What can we do to increase diversity and provide more opportunities?

The main thing is helping to boost an author of color that you read and loved. And not just in conversations about your favorite diverse authors/books, but in conversations about your favorite books period. If publishers realize that people will buy books with diverse main characters, they’ll publish more books with diverse main characters.

The other thing is that we all need to speak up when we see outdated and prejudiced behavior and attitudes in the mystery community. It can’t just fall on the writers of color to point out when something is hurtful, wrong, or tone deaf.

What authors or books have influenced your own career as a writer, and why?

What do you wish you had known before you started on your publishing journey? What advice do you have for aspiring authors?

I wish I realized more that the insecurities I had wouldn’t magically go away just because I finally got a book deal. They’re still there, they’re just different. Instead of worrying about getting published, I’m worried about staying published. Instead of worrying about if an agent likes my book, I worry if a reviewer or reader will. The only thing we can control is the actual writing, so my advice to aspiring authors is to just focus on finishing the manuscript and try to find a group of fellow writers who can serve as your cheerleaders when needed and your psychologist when needed as well.

My favorite quote is from Dorothy Parker: “I hate writing. I love having written.” My “routine” is usually to write when there is literally nothing else I can do. Like I should be writing right now and instead I was like, “Let me go ahead and answer these questions.”

The 53rd Street Library in Manhattan is just gorgeous. It has this beautiful theater-like seating area where they show movie-size photos of New York.

What’s next for you, Kellye? Can readers look forward to a new Detective by Day mystery?

There will be at least one more book in the Detective by Day series. It should be out next year. 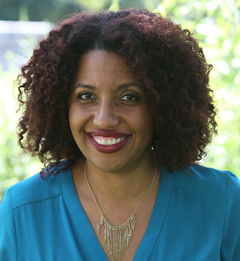 Kellye Garrett writes the Detective by Day mysteries about a semi-famous, mega-broke black actress who takes on the deadliest role of her life: Homicide Detective. The first, Hollywood Homicide, was recently nominated for Agatha, Lefty and Barry awards. The second, Hollywood Ending, will be released on August 8, 2018 from Midnight Ink. Prior to writing novels, Kellye spent eight years working in Hollywood, including a stint writing for Cold Case. She now works for a leading media company and serves on the Board of Directors for Sisters in Crime as the organization’s Publicity Liaison.