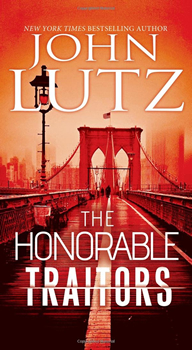 In John Lutz’s new thriller, THE HONORABLE TRAITORS, Thomas Laker, top agent of the elite, super-secret agency The Gray Outfit, investigates the death of a long-time Washington insider. Teaming up with NSA code breaker Ava North, he delves into secrets buried since World War II in order to prevent an act of domestic terrorism. His opponent is a man of many deadly skills and disguises. And the chase extends from Hawaii to New York City, culminating in a countdown to unimaginable destruction that only Laker can prevent.

An ability to write in different crime genres is a staple of Lutz’s career, but they all have one thing in common—the books are about people doing bad things. And when it comes to the espionage genre, Lutz says his characters will be doing BIG bad things. “I’ve become interested in evil-doing on a global scale.”

Lutz likes unique heroes, both independent and self-reliant. His earlier series characters were private investigators in one-man agencies and retired cops who were so good the NYPD had to call them back to work.

Thomas Laker, the lead character of THE HONORABLE TRAITORS, fits that profile as well.

He works for The Gray Outfit, a small, super-secret agency that has more flexibility than the CIA or NSA. Its agents are experienced people with illustrious reputations in intelligence circles that open doors closed to everyone else. They work on their own, flying under the radar. Laker reports to his tough-as-nails boss, Sam Mason, but luckily Mason has as much disdain for routine methods as he does.

As in all of Lutz’s novels, character assembly takes careful consideration.

“With some ideas, I know where they came from,” Lutz explains. “Laker’s home, a loft so enormous he uses a teepee for his bedroom, actually exists, though it belongs to an architect, not an agent, and it’s in downtown Manhattan, not Washington. But I don’t know where the idea for Laker’s drink—Speyside Cardhu, a single-malt scotch—came from. Maybe he picked it himself.”

A portion of the story takes place in Hawaii and deals with the infamous internment camp during WWII. During this time, Japanese-Americans living in Hawaii were rounded up in violation of their rights and imprisoned in internment camps. It didn’t happen only in California. Honouliuli, the camp that features in the book, actually existed—and it was the largest. Far from a secret, it’s become a national monument, listed on the U.S. Park Service website, though it isn’t open to visitors yet.

“The internment of Japanese-Americans is a shameful chapter in American history,” Lutz says. “But some might defend the Hawaiian authorities on the basis that they had more reason to fear a Japanese invasion than Californians did.”

Being a WW II history buff, Lutz’s research turned out to be quite enjoyable. He’s read countless books about that era over the years and welcomed the opportunity to incorporate some of the facts into his fiction.

“Though certain plot elements in THE HONORABLE TRAITORS may seem far-fetched, knowledgeable readers will, I hope, recognize how much of the background is accurate,” he says.

Readers of Lutz’s Frank Quinn books know that the author takes a lot of care with his villains. They’re not “simply evil”—because life isn’t simple.

“As the title indicates, THE HONORABLE TRAITORS think they’re doing their duty when they pull off what somebody in the book calls the greatest heist in history,” Lutz says.

The second book in the series, titled The Havana Game, is finished. The author promises readers will meet more members of the North political dynasty: Senator Chuck North (R-OK) and Tilda North, the black sheep of the family. Ava North, Laker’s girlfriend and an NSA code-breaker, plays a major role in the HONORABLE TRAITORS and will do so again in the next book.

“There’s also more scope in settings,” he says. “While the first one ranges across the United States from Hawaii to New York, The Havana Game will go to international locales, and not just Havana. Laker travels literally around the world. It’s a rough trip.” 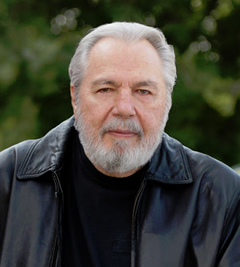 John Lutz is the author of over 50 novels, and the winner of both the Edgar and Shamus awards. His novel “SWF SEEKS SAME” was made into the major motion picture Single White Female. A New York Times bestselling author, he has written in all the major genres of crime fiction, including private eye, serial killer, and psychological suspense. With THE HONORABLE TRAITORS, he turns to the espionage genre.