Knowing How to Pick Your Poison 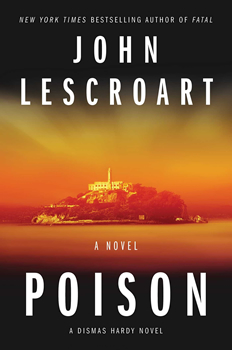 John Lescroart kicks off 2018 with two major birth announcements—the successful delivery of his first grandchild in January, and the Feb 13th release of the next thriller in his bestselling Dismas Hardy series, POISON.

While both events have certainly put Lescroart in a celebratory mood, things aren’t quite so rosy for Dismas, who begins his 16th mystery in a somewhat contemplative state. Still recovering from two near-fatal gunshot wounds, Dismas has sworn to stay out of the courtroom—a vow that’s quickly broken when he is drawn into a new case involving money, potential heirs, and…poison.

The result is a classic Lescroart mystery that he ranks among the the best he’s written—and for a New York Times bestselling author with almost 30 novels to his credit, that’s saying something.

“I love POISON,” he says, with a bit of shy enthusiasm. “It’s entertaining and fun. Chapter 1 starts off at a ball game, and by Chapter 2, we’re at a murder scene with a cop.”

And that’s where readers are introduced to this novel’s weapon of choice. To research for it, Lescroart met with his doctor, who put him in touch with a poison expert. A couple cups of coffee and 10 pages of notes later, Lescroart had everything he needed to craft the story.

“Poison is really such an old-fashioned way to kill someone,” he says, which meant it carried some charm for him. But much like everything else in Lescroart’s creative process, the decision was just part of his organic plot infusion—Lescroart doesn’t outline. Not one single word.

“Half the time I don’t have a plot until I’m 60 pages in,” he says. “I don’t start with an idea—I start with a great sentence.”

While he’s certainly not alone on the “pantsing” front, Lescroat’s entire career—albeit very successful—was built on taking it one day at a time. He went from making music to penning a novel, to writing a few more, to creating a series, to establishing an 18-book streak on the New York Times bestseller list. His novels have been translated into 16 languages. But perhaps most impressive is that this “master of the legal thriller” has never been a lawyer.

A trusted friend of many years helps Lescroart keep the legal facts straight, but he says in all the years he’s been writing, not a single major plot point has changed after consultation, a testament to the fact that authors shouldn’t always follow the adage “write what you know.”

“Finish the book, and then fix it,” he says, noting that getting too wrapped up in details can sometimes quash creativity. “It’s difficult to keep fresh—I don’t want to agonize over this stuff. I write by the seat of my pants so I can solve the puzzles as I go.”

Those puzzles extend beyond the who, what, why and where of the story, and into the business side of the industry as well, a part of the job that Lescroart didn’t think as much about when he started writing a few decades ago.

“Publishers don’t play the same role as they have in the past,” he says. “Authors are being asked to do a lot more of their promotion—such as being active on social media. In the old days, we used to do extensive book tours, but now when a novel comes out, you only visit a few stores. It’s not something to complain about—it’s more of a ‘that was then, this is now’ thing.”

In fact, in these ever-evolving times, Lescroat says he’s thankful to still be immersed in a career that is both rewarding and fun.

“I started making a living as a writer when I was 45,” he says. “Before that, I did every odd job there ever was. It’s a lot of work, but it’s a fantastic career and a great life.”