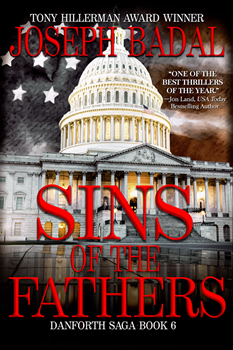 If you like your thrillers to be complex, stimulating, and tension-filled, with heroes you love and villains you hate, your next read should be SINS OF THE FATHERS by Joseph Badal.

The sixth installment of the Danforth Saga kicks off with the kidnapping of Michael and Robbie Danforth, the son and grandson of veteran CIA operative Bob Danforth. The abductions lead to terrorist attacks and Special Ops campaigns in the United States, Mexico, Greece, Turkey, and Syria.

Badal writes big stories, but with very human characters. “Bob and [his wife] Liz are American patriots and are portrayed as everyday heroes,” he says. “But they are, unlike protagonists in many other thrillers, the antithesis of superheroes.”

The senior Danforths are kind and loving people—until you threaten their loved ones or their country. And there are threats aplenty in this epic tale of political intrigue that ensnares three generations of the Danforth clan. Multi-generational stories, while fairly common in romance and fantasy, are rare in thrillers, but Badal cites a practical reason for expanding his cast: Bob and Liz are now in their seventies, so the focus of SINS OF THE FATHERS is more on their son, Michael, and teenage grandson, Robbie.

“I felt the Danforths were characters who would have an enduring impact on readers,” Badal says. “But thrillers need lots of action and I came to the point where Bob and Liz were too old to provide all of it. That’s the reason I slowly brought along their son and grandson.”

Considering the series’ roots, it’s not surprising that family bonds have emerged as a dominant theme. Prior to a four-decade career in the financial services industry, Badal was a decorated U.S. Army officer whose deployments included stints in Greece and Vietnam. The Danforth Saga evolved from the author’s real-life experiences, including the kidnapping of his two-and-a-half-year-old son in Greece—an event that inspired the 2011 series-starter Evil Deeds. It all grew from there. The ongoing saga involves CIA and military operations, plus terrorist sleeper cells and drug cartels. One reason the action seems so real is that Badal has the background knowledge to bring it to life. Besides his military experience, he tries to visit every country that plays a role in his novels.

“In SINS OF THE FATHERS, there are scenes in Greece, Turkey, and Italy, for instance,” Badal says. “Obviously, visiting countries such as Syria and Iraq is problematic today. Thanks to interviews with people from those countries and with Americans who have served there, and thanks to the internet, I have been able to make my scenes as authentic as possible.”

The primary villain in SINS OF THE FATHERS is the ISIS leader, and he and his organization are behind almost all of the villainy that occurs in the book. In real life, Badal has a broader view.

“As to which villains are the most dangerous—foreign militaries, terrorists, or drug cartels—I don’t believe you can rank one over the other,” Badal says. “In fact, they are often in league with one another.”

But however dangerous his villains might be, a major point of this series is that Badal avoids turning his characters into superheroes. They are, instead, everyday heroes who the reader can more readily relate to. And unlike most thriller fiction, a theme is easily identifiable.

“The common theme that runs through all 12 of my books is the conflict between good and evil,” says Badal, whose published credits include two other ongoing series and a number of standalone thrillers. “And, after significant tension between the two, the ultimate triumph of good over evil.”

In the future, we can expect to see Robbie Danforth assume a larger role. Of course, Bob, Liz, Michael, and Robbie’s mother, Miriana, will continue to play important parts in the story, too. For now, get to know the Danforth family in SINS OF THE FATHERS. 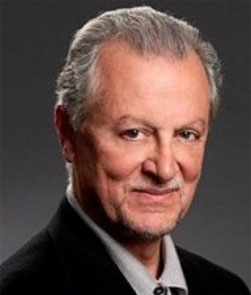 Prior to a long finance career, including a 16-year stint as a senior executive and board member of a NYSE-listed company, Joseph Badal served for six years as a commissioned officer in the U.S. Army in critical, highly classified positions in the U.S. and overseas, including tours of duty in Greece and Vietnam, and earned numerous military decorations.

He holds undergraduate and graduate degrees in business and graduated from the Defense Language Institute, West Coast and from Stanford University Law School’s Director College.

Joe is the author of twelve published suspense novels and a two-time winner of the Tony Hillerman Prize for Best Fiction Book of the Year (Ultimate Betrayal in 2014 and The Motive in 2016). He earned “Finalist” recognition for The Motive and Borderline in 2017 from the International Book Awards. The Military Writers Society of America awarded Joe two Gold Medals in 2017 for The Nostradamus Secret and The Lone Wolf Agenda, its Gold Medal in 2016 for Death Ship, its Silver Medal in 2016 for Terror Cell, and its Silver Medal in 2015 for Evil Deeds. His The Lone Wolf Agenda was named the top Mystery/Thriller novel in the 2013 New Mexico/Arizona Book Awards competition.