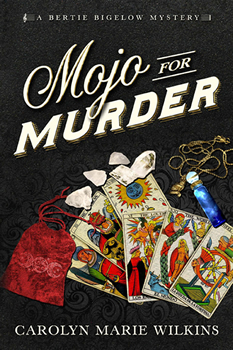 Do you believe in magic?

There’s a hex on Charley Howard’s Hot Links Emporium, and Charley, a.k.a. the Hot Sauce King, is furious. He suspects the Jamaican psychic who’s been “advising” his gullible wife Mabel is a phony, and he asks choir director Bertie Bigelow to do a little amateur sleuthing to help him prove it.

But Bertie’s already got all the drama she can handle.

The high-profile concert she’s doing with The Ace Of Spades, an ageing (but still sexy) rap star, has Metro College in an uproar. Her on-again, off-again flirtation with attorney David Mackenzie has hit a dead end, and her best friend Ellen Simpson has been seduced and abandoned for the third time this year.

When a Chicago Zoning Commissioner is rushed to the emergency room after filling up on the Soul Food Special at Charley’s restaurant, Bertie is forced to take action. She doesn’t need a crystal ball to know that there’s trouble on the horizon.

On the South Side of Chicago, a murderer lies in wait for Bertie Bigelow. To solve this case, she’s going to need all the mojo she can get.

Will Bertie get her mojo working in time?

I would like for readers to have fun when they read MOJO FOR MURDER. The Bertie Bigelow series is  meant to be light hearted and fun.  At the same time, readers will finish reading my book with an increased understanding for what life is like for people like Bertie Bigelow on the South Side of Chicago.

I believe MOJO FOR MURDER contributes to the cozy mystery genre by giving readers a window into the lives of nontraditional characters.  Bertie and most of the other characters in the book are African Americans living on the South Side of Chicago. In spite of the fact that hey live in one of the city’s most dangerous areas, Bertie and her friends, laugh, live, and fall in love just like anyone else.  And when Bertie discovers a cold-blooded killer in their midst, the game is on!

What surprised me the most was how much fun I had writing it.  There were several places (I won’t say where) where I laughed out loud while writing.

I’ve been keeping it on the QT but I am a psychic and a bit of a New Age buff! I had a big hoot sending up mediums, hexes, Tarot cards and similar phenomena in MOJO FOR MURDER.

“Carolyn Wilkins’ new mystery, Melody for Murder, features Bertie Bigelow, a delightful sleuth if ever there was one. Bertie teaches music at Metro Community College in Chicago, but when police suspect her of murder, she doesn’t pound her piano. She sets out to find the killer.
If you enjoy humorous mysteries with a musical twist, Melody for Murder is for you! Let’s hope Ms. Wilkins is already writing the next Bertie Bigelow mystery.” – Susan Fleet 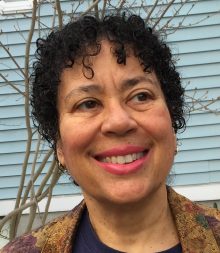 As a kid growing up on the South Side of Chicago, Carolyn Marie Wilkins dreamed of singing backup for Aretha Franklin while becoming the next Agatha Christie. Although she’s still waiting for Aretha to call, Carolyn is now the author of five books. MOJO FOR MURDER and Melody For Murder feature the crime-fighting exploits of Bertie Bigelow, a forty-something choir director and amateur sleuth living on the South Side of Chicago. Carolyn’s nonfiction work includes They Raised Me Up: A Black Single Mother and the Women Who Inspired Her; Damn Near White: An African American Family’s Rise from Slavery to Bittersweet Success, and Tips For Singers: Performing, Auditioning, Rehearsing.

An accomplished jazz vocalist and professor at Berklee College of Music, Carolyn has performed on TV and radio with her group SpiritJazz, toured South America as a Jazz Ambassador for the US State Department, and played for shows featuring Melba Moore, Nancy Wilson, and the Fifth Dimension. When she’s not in the classroom or writing her next mystery novel, Carolyn can be found hanging out in the jazz clubs around Boston, MA.

To learn more about Carolyn, please visit her website.