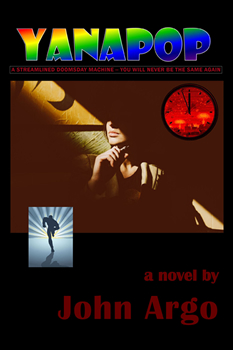 Newly in love, 21 years old, head over heels, Martin Brown and Chloë Setreal need each other with total hunger and passion. But Chloë, a production assistant at a media conglomerate (YANAPOP in Los Angeles) is laid up with a broken leg and needs Martin to come hold her hand. Martin, in San Diego for the summer (two hours down the coast from LA) hops in his car and heads north, like the dashing hero that he is. What should be a simple, two-hour drive on the freeway turns into a nightmarish adventure through dystopia and beyond.

The plot is fun, scary, dark, and totally over the top. One thing piles on top of the other unrelentingly, as heroic Martin struggles against cosmic odds to reach the new love of his life. This is Southern California as we’ve never seen or imagined it, rich with its beaches, snowy mountains, broiling deserts, shimmering lakes—not to mention mysterious surfers, vampire girl scouts, alien taxi drivers, and other unusual persons. Thriller author John T. Cullen (many novels and nonfiction books) writes as John Argo (author of more than twenty SF and DarkSF novels.)

The author took time out of his prolific career to discuss YANAPOP with The Big Thrill:

Well, first, here is an aspirin before we start: although it has deep layers of meaning, you don’t need to be a brain or an egghead to “get it.”  YANAPOP is a fast, thrilling, vernacular race to the finish that anybody can easily understand—and love. I don’t say this as a parent (the novel is one of my children) but once a novel is done and on its way, the author goes from being a participant to an observer. I’m pleased to wave goodbye as I move on to the next project.

Readers will take one the wildest roller-coaster rides of their lives, and come away with the restored idea that imagination still has new worlds to explore. Although tightly structured and sparingly executed, this novel is one of any reader’s least formulaic novels ever enjoyed. Those who get off the ride with shaky legs and blurry vision will immediately cry for more. If I do decide to write a sequel, I will make sure this novel remains a once-in-a-million standalone. The thriller aspects are all there: the shooting, the running, the terror, the wonder (as Jeff Goldblum informs us in the Jurassic Park sequel) and above all, the relentless pacing on a nightmare stallion through the cosmos of Southern California (LA and San Diego) as few have ever experienced or imagined it.

I call it the world’s first Attitude Thriller. If you think you’re out there and hip, this novel takes you beyond the beyond. Even when you come home after the ride is over, nothing will seem quite the same ever again. Remember: attitude spelled backwards is edutitta, which is a long-lost Ligurian (Italian) expression for things being led out (from the dark into the light). I just made that up, but that’s okay—I write all sorts of half-truths to entertain and edify readers.

I was just then realizing, more than ever, that all of literature is the love story. I am not the first to say this. In the car, in the supermarket, wherever we go, we are swathed in a variety of elevator music, supermarket music, taxi music—you name it—and every one of those songs is about the love story. We hear it so much that we tune it out—but it’s the driving DNA of life. YANAPOP is the name of a (fictional) entertainment colossus in LA, where Chloë Setreal works. She is beautiful, mysterious, and a goddess at 21, with whom Martin Brown (Ulysses) 20 of San Diego falls madly in love. YANAPOP is his journey (quest) to reach her in an hour of need when she asks for his help. His two hour drive turns into a 24-hour “air-conditioned nightmare, a streamlined doomsday machine” echoing the blurbage of Thomas Pynchon’s 1967 masterpiece The Crying of Lot 49; as well as Henry Miller’s 1938 odyssey about air conditioning and insomnia.

YANAPOP is a marketing term I invented on the fly, which stands for Young Adult, New Adult, and Participating Older Persons; or as my wife put it: pissed off people, about all the marketing bromidia of NY/LA). The novel has the essential ingredients of (just to pick something quickly) the love story of Ulysses and Penelope in The Odyssey… At least 90 per cent of literature mirrors that deep evolutionary drive of all life. YANAPOP, like the Odyssey, involves the desperate journey and fantastic/horrific adventures of the hero in his quest to unite with his faithful and loving wife Penelope.

Put aside all of your notions and get on the bus. You will never be the same again. I will show you things you didn’t know literature could do. Actually, there is nothing new under the sun—we merely rediscover that which is born anew every day when the sun arises (orient, from oriri in Latin) after its nightly death (occident, from L. occidere to die or kill) and flies in chariot glory across the new daytime sky as Helios. If anything, YANAPOP is commercially a YANA novel but POPs will enjoy it as well. All I can say is—let go of all your inhibitions, assumptions, and prejudices, and fly with me.

I’ve already mentioned Homer (Iliad, Odyssey). In the same breath one must mention Virgil, whose Aeneid is Homer’s epics standing on their heads (reversed). I go back as far as Gilgamesh or David/Bathsheba. All literature is the love story. Shakespeare comes to mind.

My favorite novel of all time is Thomas Pynchon’s The Crying of Lot 49, which is one of those one-time supernovae like F. Scott Fitzgerald’s The Great Gatsby. I have no pretense or hope of equaling those or any other singularities in the cosmos of literature. Among all my novels and books, this is probably my supernova although I would also offer the John Argo SF future history novel Moon Berry Wine or my recent John T. Cullen thriller Valley of Seven Castles, a Luxembourg Thriller, which is the world’s first Progressive Thriller. I’m developing all the info in one spot, and at www.ClockTowerBooks.com.

John T. Cullen, a San Diego author (www.sandiegoauthor.com) who writes thrillers and nonfiction, lives parallel lives as John Argo (internet publishing pioneer since 1996, author of DarkSF and future history SF) and as Jean-Thomas Cullen (his real name) in writing sentimental, poetic love stories. He lives in San Diego with his wife, son, and cat, and has written the definitive analysis of the 1892 true crime involving the Beautiful Stranger, who died mysteriously of a gunshot to the head at the Hotel del Coronado. The case became a national sensation in 1892, and Cullen is doing his utmost to bring this amazing story out of obscurity where a long-ago coverup dimmed the gaslamps on it.