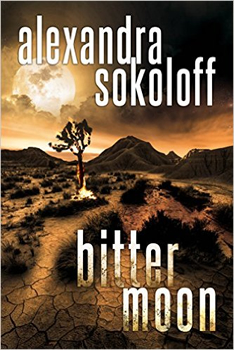 A female serial killer at the center of a series of suspense novels. In the wrong hands it might not work.

But in the right hands—Alexandra Sokoloff’s hands—it not only works but proves that a revelatory series with great characters can burrow deep. And stay there.

In the fourth novel in the series, the action is suspenseful, the atmosphere eerie, the characters nuanced. You’d expect no less from Sokoloff, a successful screenwriter, author of popular nonfiction writing books like Screenwriting Tricks for Authors, workshop leader and blogger. But BITTER MOON accomplishes a truly remarkable feat: It is both a prequel that explores the harrowing history and psychological development of Cara Lindstrom as it unfolded 16 years ago in a town in the California desert, and a narrative that follows FBI agent Matthew Roarke as he investigates her history—and finds himself on the trail of long-ago brutal killers who were never caught. With a plot that swivels back and forth between alternating points of view, the two characters are literally in the same place but not at the same time, their arcs drawing closer and closer to a tense finish.

Sokoloff makes further choices that push the novel into fresh territory.  What puts Roarke in more danger is that he is not on the job as an FBI agent during BITTER MOON. At the end of the preceding novel, he was shaken and disturbed by what happened to Cara. Finding answers takes over his life; it’s personal. “I wanted him to stop being an agent,” Sokoloff says. “He was really hit hard. ”

As for the inspiration for Cara Lindstrom, she came from several sources. One influence was the atmosphere in California surrounding the murders committed by the Zodiac Killer, a serial killer who was never caught. Another is the story Sokoloff read about a nine-year-old girl who was at a friend’s house the night a murderer struck, and the girl was left for dead.

“This is a girl who has seen pure evil,” Sokoloff says. 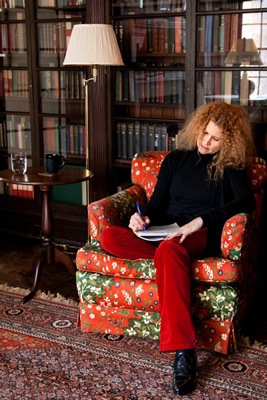 Another feature of the series is the melding of careful research into crime forensics with plot developments that could possibly be supernatural. On one page, a reader finds discussion of the latest technology in evidence rape kits; on another, there’s a suggestion of a shamanic vision.

As for writing the storyline set 16 years ago, it proved a greater challenge than one might assume. There was definitely technology—people were using email—but nothing like what we use today. “It’s important to not be specific politically,” she says. “You have to be careful, so as you don’t take readers out of the world.”

Sokoloff says the series may be ending with BITTER MOON, but devotees can take heart in the books’ being optioned for a television series.

And one guess on who is writing the script… 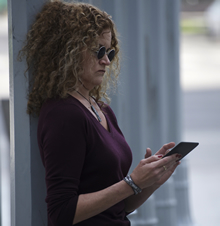 Alexandra Sokoloff is the Thriller Award-winning, Bram Stoker and Anthony Award-nominated author of twelve bestselling supernatural and crime thrillers. She has worked ten years as a Hollywood screenwriter and is the author of the internationally acclaimed Screenwriting Tricks for Authors workbooks. The New York Times has called her “a daughter of Mary Shelley” and her books “Some of the most original and freshly unnerving work in the genre.” Her Thriller Award-nominated Huntress Moon series follows an FBI agent on the hunt for a female serial killer, smashing genre clichés and combating the rise of violence against women on the page and screen.