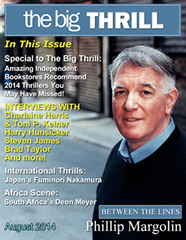 Read the stories that were featured in the December edition of The Big Thrill.

As we close 2014, The Big Thrill would like to thank its incredible feature and contributing editors who helped make this year one of the magazine’s biggest and best yet. In the last twelve months we covered nearly 400 new releases from members of the International Thriller Writers as well as dozens of special features and cover stories on some of the world’s bestselling authors. More than 24,000 subscribers now receive the monthly email with the latest edition, and the website receives well over half a million hits per month. None of this would be possible without the extraordinary staff of ITW members who volunteer their time to support other ITW members.

For the December edition, we end the year on a high note with a Between the Lines interview with Phillip Margolin, who talks about his path from storied criminal defense lawyer to author of 17 New York Times bestsellers and discusses the inspiration for his latest release, Woman with a Gun.

Just in time for the holiday gift-giving season, in this month’s Special to The Big Thrill, six iconic mystery bookstores give their recommendations for incredible novels you may have missed this year. December also brings the latest installment of International Thrills where Layton Green talks to bestselling crime writer Fuminori Nakamura. And on the Africa Scene, Michael Sears interviews bestseller Deon Meyer.

Of course, let’s not forget the 32 new releases in this issue, which include titles from established and debut authors, including the final installments of two acclaimed series from Steven James and Laura Joh Rowland.

Here’s what’s in store for December!

December 1 – 7: Is fear the most common emotion in a thriller? What other emotions run through your favorite thrillers?
December 8 – 14: For many, it takes months to draft a novel and consistency can suffer. Names, vehicles, time required for a familiar walk may vary. How do you organize the details to ensure consistency?
December 15 – 21: Did your editor insist on a title change? Why are some titles magic and what are some of your favorites?
December 22 – 28: NO ROUNDTABLE
November 29 – January 4:  NO ROUNDTABLE

Congratulations to June Elwyn Heim, the winner of this month’s BIG THRILL giveaway. June will receive an assortment of signed thrillers including Broken Bonds by Karen Harper, Murder by the Seaside by Julie Anne Lindsey, Chasing the Dollar by Ellie Ashe, Amazon Burning by Victoria Griffith, Retirement Can Be Murder by Susan Santangelo, Want You Dead by Peter James, Jesus Jackson by James Ryan Daley, In His Shadow by Tiffany Snow and A String of Beads by Thomas Perry.

No Fortunate Son by Brad Taylor