It was the call every adult child dreads: “AnnaLise? You should come home. Your mother Daisy went and drained all the blood out of poor Ema Bradenham.”

Well, maybe not every adult child.

While life on Sutherton’s Main Street had often been inexplicably hazardous, the day Daisy Griggs siphoned nearly three pints from Mrs. Bradenham during the annual blood drive seemed to set a new standard, even by the unusual measure of this North Carolina resort town.

Answering the summons, AnnaLise returns home to find Labor Day preparations in full swing. But this traditional celebration promises to be no picnic. People are dying and unless AnnaLise can figure out why, her mother Daisy may be next.

The Chicago Tribune said, “…as wonderfully rich and sharply written as anything going. What moves Balzo’s book high above other writers who try to cover the same territory is a sharp and often amusing skill that convinces us that this is real life, and that it matters.”

Reader’s will agree. This first novel in Sandra Balzo’s second series with Severn House is a must read.

Balzo turned to mystery writing after a successful 20-year career in corporate public relations, event management and publicity. Her first series, Maggy Thorsen Mysteries, garnered starred reviews from Kirkus and Booklist, and nominations for both the Anthony and Macavity awards. In addition, she writes short stories, two of which have been published in Ellery Queen Mystery Magazine, winning the Macavity, Derringer and Robert L. Fish awards.

Her second series, Main Street Mysteries, debuts in April 2011 with RUNNING ON EMPTY. The books feature reporter AnneLise Griggs and are set in the popular vacation destination of North Carolina’s High Country. Booklist says “readers who enjoy Margaret Maron’s Deboroh Knott mysteries will have fun with this one,” while Library Journal suggests your new series is for readers of G.A. McKevett and Joan Hess. Recently The Big Thrill contributing editor, Christine Goff, caught up with Balzo and asked her a few questions:

The Maggy Thorsen Mysteries series has been widely heralded; and now several major literary publications have said RUNNING ON EMPTY, the first in the Main Street Mysteries, would appeal to readers of some fairly iconic writers. Are you feeling the pressure?

Honestly, I’m so honored to be mentioned in the same breath with the likes of Maron, McKevett and Hess that I hadn’t thought about the pressure until . .  . well, now.  Thanks a bunch, Chris.

No, really. I know it sounds silly because of my publicity background, but in my own work  I’ve always leaned toward under-promising and over-delivering. Cook the steak, and the sizzle shall come.  (Marketing Gods, don’t strike me down!)  I just keep writing what I like to write –and to read.  I guess that’s why it’s so exciting for me to pry my bloodshot eyes from the screen and  hear those kind of comparisons. SO cool. So very, very cool.

I have read that your publishing success was not immediate, yet now you have one award-winning series and a new series debuting. Can you tell us a little bit about how you got to this point?

I was downsized from my public relations job back in 1996, and decided I was going to write a book and become rich and famous. I had nine whole months of severance and how long could it take, right?

Well, that book, Uncommon Grounds, wasn’t published for six years, and I’m still waiting for the rich and famous part.

With my severance exhausted, I started to do publicity for other authors. One of them was Jeremiah Healy, and Jerry — now my fiancé — suggested I try my hand at a short story. I wrote  The Grass is Always Greener, which was published in Ellery Queen Mystery Magazine.  The story won the Robert L. Fish Award for best first short story at the Edgars® that year, and right around the same time I found out that Tekno/Five Star was going to publish Uncommon Grounds. It got great reviews and with the blessing of Marty Greenberg (legendary anthologer and president of Tekno), I moved the series to Severn House. I’m working now on Triple Shot, the seventh book, which will be out later this year.

I’d had an idea for another series, though, about a tiny town that swells to huge proportions during tourist season (so many things to do, people to kill). I pitched it to my editor at Severn House and she loved it, so we’re now alternating between the two. The new books revolve around AnnaLise Griggs, an investigative reporter who comes home to the North Carolina mountains when her mom starts to fail. But it’s the setting and the ensemble cast that are the real stars. Along with death, of course.

Three years ago Jerry and I moved to South Florida, but until then I’d lived in Wisconsin all my life, so that one was a no-brainer.

I’d originally planned to set the new series in Lake Geneva, Wisconsin, but then I visited the High Country in western North Carolina and fell in love. Not one, but TWO tourist seasons — summers, when southerners escape to the cool mountains; and winters, when skiers take them over. Also, there’s a fascinating relationship between the natives (people whose families settled the place), locals (long-term residents who consider themselves natives), and the seasonal summer folk and winter skiers.

While Maggie Thorsen is a business owner, AnnaLise Griggs is a reporter. Where did this new character come from and what can you tell us about her?

I think people with natural curiosity are drawn to the field. Also, it gives her a reason to delve into the history and lives of the people around her. Lastly, as a writer she could freelance and make a living without my needing to find her a job in a diner or t-shirt shop!

Your first series has a lot of humor. Do you see that as an important element of the Main Street Mysteries and RUNNING ON EMPTY, or can we expect to see a little different tone?

I honestly didn’t set out to make the coffeehouse series funny, but Maggy is, so the books are. Also, I love word-play and, when I couldn’t sell the first book for so long, I put in things that amused me. Luckily for me, other people laughed, too.

The AnnaLise books have humor, but they’re not quite as cynical, because AnnaLise isn’t. She’s warm and very real, surrounded by a lot of prickly characters who ultimately care about each other. The humor comes from their view of the world and the people who come to visit.

I’m going to do my best to keep it that way.

With two series going and all of her generous work for the mystery community (Balzo has handled publicity for three Bouchercons, the International Association of Crime Writers and has served as a national board member of Mystery Writers of America) it takes some doing to keep up with her. For information on touring schedules or upcoming novels, please visit her website. 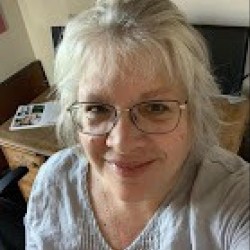 Latest posts by Christine Goff (see all)
0
No Comments Yet