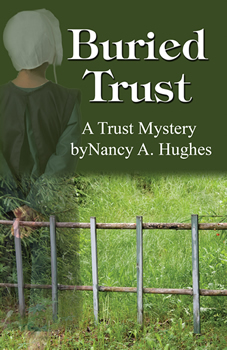 Two years after Kingsley and Todd Henning recovered their kidnapped infant, they are enjoying their country existence. Everything changes when criminals initiate a criminal enterprise on the farmland adjacent to the Hennings’. Angered by late-night operations, zoning violations, and a violent foreman, the Hennings launch an investigation. Confrontations escalate. The criminal bosses attempt to buy, scare, terrorize, and kill the Hennings, whose sleuthing threatens their lucrative operation. Risking their lives, the Hennings expose the true nature of the enterprise. They realize that every close call has been thwarted by unexplainable circumstances. They suspect that their house, as rumored, is haunted by a spirit with an agenda of its own. Two crimes, one location, separated by two centuries. The question that binds them: What is buried beneath?

The Big Thrill caught up with prolific novelist Nancy A. Hughes to learn more about her latest mystery, BURIED TRUST:

As the fourth in a series, I promise my readers that, in spite the ongoing lives of returning characters, my books can be read out of order. In plain words—no spoilers. That a baby kidnapped in a previous book is now a healthy two-year-old gives no hint about how that crime was solved. The biggest opportunity is to faithfully research the details and validate every turn and twist in the plot.

Solving a puzzle with all its intricacies. Creating a tangle of characters complexities, their triumphs and failures as they attempt to solve complicated crimes.

The characters drive the plot, and like my previous novels, have an underlying, compelling cause. Set in Lancaster County’s farmland that dates to the William Penn Charter, Buried Trust characters’ 1803 home is central to two crimes—a 150-year-old murder and a present-day crime in progress. Protagonist Kingsley Anderson Henning has grown from a sheltered, Philadelphia Mainline young widow to her present life: a remarried wife, mother, and successful banker. She’s older, tougher, and more determined than whom readers met in A Matter of Trust (book 1). Plot, character, and setting are inextricably interwoven.

Speaking of research, as a graduate journalist, I learned about the early history of my central Pennsylvania home, dating to the arrival of the earliest settlers, William Penn’s legacy, and Conrad Weiser’s contribution. And I discovered The Herbalist’s Kitchen by Pat Crocker while researching garden remedies people would have prepared in the 1850s. I love sweating the details, from what kayak to use and those hazard symbols. Besides being fun, it lends authenticity to my stories.

As a small child, I read every Nancy Drew mystery and have been drawn to crime fiction ever since. I love Linda Castillo’s mysteries, set in a fictitious Ohio Amish community, the latter being familiar to me in PA Amish country. That she takes such care with the details impresses me. But as we’re told, we can’t just make it all up or learn from TV. Among other fine texts, I’ve studied the “Howdunit” series, especially Book of Poisons by Serita Stevens and Anne Bannon; D. P. Lyle, MD’s Forensics, and Russell Bintliff’s Police Procedural. Sue Grafton and Daniella Bernett wrote beloved great series that inspire me.

Where do you get your ideas?

I joke that I’d pay big bucks for a clever, original idea. The answer? I have a huge imagination. Being a keen observer of people, places, and events, I can think of more ‘suppose’ and ‘what-ifs’ than I’ll ever have time to turn into books.

Nancy A. Hughes, a Penn State graduate, writes character-driven crime-solving mysteries. She followed her dream from journalistic business writing to a life of crime. Her debut novel, The Dying Hour, launched October 15, 2016. A Matter of Trust, the first of the three-book Trust series, was released May 6, 2017. Its sequel, Redeeming Trust, followed December 9, 2019. Vanished: A Trust Mystery Book 3 was released by her publisher, Black Opal Books, on October 27, 2018. The sequel to her debut novel, The Innocent Hour, followed in 2019. And in June 2022, Buried Trust.

When Nancy isn’t writing, she is devoted to shade gardening and to volunteering at the Veteran’s and Reading Hospitals. She is an active member of MWA, ITW, Sisters in Crime, and Penn Writers. Visit Nancy on her website, on Facebook, and Twitter.