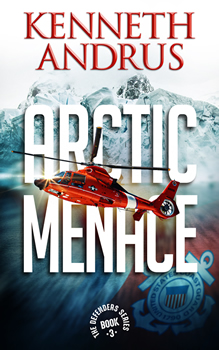 As ARCTIC MENACE opens, a Chinese mini-submarine is trapped in the ice after discovering rare earth elements off the coast of Alaska. Several nations—and some multi-national corporations—want to get their hands on these elements for military and financial reasons. National Security Analyst Nick Parkos has to overcome treason at the highest levels of the American government and thwart Beijing’s efforts to acquire and secure these vital resources.

Protagonist Nick Parkos is quite organized in his approach to his job; he even uses Venn diagrams. How does this compare to Andrus’s approach to writing an intricately plotted novel?

“Nick uses his cognitive skills and Venn diagrams to help him organize his thoughts and make connections in his complicated investigations,” he says. “While I use my outline instead of a Venn diagram, I’ve found the same methodology is useful to ensure I identify and carry through the salient points and maintain the focus on both my story and character arcs.”

How has Andrus’s decades in the Navy helped him while working out the details of his novel?

“My years in the Navy have been integral in fleshing out my story arcs in a number of ways,” he says. “The first would be looking at my draft from the 5,000-foot level to provide a realistic, broad perspective view of the story. On a more immediate level, a number of things come to mind: maintaining my focus, the mental discipline to write every day, meeting deadlines, learning how to present a draft, and accepting ‘constructive’ criticism. In the Navy, we call the last one a ‘Murder Board.’”

How about the challenges of keeping the reader’s eye on the narrative with all the government agencies, foreign agents, and moving parts involved in ARCTIC MENACE?

“One of the issues I’ve had to address in my novels is the challenge of keeping my readers from getting lost in my complicated plot lines and the alphabet soup of agency acronyms,” Andrus says. “From my Navy years, I’d become used to all the abbreviations. But my readers? Not so much. I’ve approached this foremost with the use of the dreaded outline. I simply cannot sit down and crank out the initial drafts without first writing down both the story and character arcs. I’ve made a point of going back to my drafts, again and again, to make sure I’ve carried through and resolved all the various plot lines. To address the acronyms, I often repeat the spelled-out definitions to put them in a context where the reader can recognize them.”

Military thrillers have been popular for years—so what are some of Andrus’s influences, and what makes ARCTIC MENACE stand out in this subgenre?

“Writing in the genre of military thrillers presents its own unique challenges,” he says, “particularly trying to break through the thousands of titles in print to actually have your work read and recognized. I’ve always enjoyed a good story and, like thousands of others, I’ve read Clancy and Coonts. My favorites are the seafaring adventures of C.S. Forester’s Horatio Hornblower and Patrick O’Brian’s Captain Jack Aubrey and his foil, physician/spy Stephen Maturin. These characters use their brains and cunning over brawn to defeat their adversaries.

“In writing my own novels, I’ve strived to develop realistic portrayals of my protagonists, various supporting characters, and antagonists and place them in situations they address from their unique perspectives. I also do not have my protagonist literally blast his or her way through my novel. I’m not obsessed about weaponry; while it is essential to get the details correct, if I really wanted to delve deeply into these, I’d buy a copy of Guns and Ammo.”

One of Andrus’s characters advises, “Don’t believe everything you think.” How does that play into his personal philosophy of life? Of writing?

“As an internist, I was taught to never make assumptions, to critically look at all the data, my physical exam, and what my patients would tell me,” he says.

“I have several corollary phrases that speak to Nick’s—and to some degree my own—view of life and work: ‘It is better to trust the enemy you know than the friend you think you know,’ and ‘It’s not what you don’t know that will get you in trouble, it’s what you think you do.’ The latter is from Louis Pasteur and appears in my second novel, Amber Dawn. It’s about how to approach an unknown. Nick has mounted an old, faded quote from his criminology professor above his computer: ‘In the fields of observation, chance only favors the prepared mind.’ All of these address Nick’s underlying caution in his approach to both his life and work.”

Andrus quotes from The Art of War throughout the novel. What advice would Sun Tzu have for aspiring novelists?

“This is hands down the most interesting question I’ve ever been asked about my writing,” he says. “I have often used quotes from Sun Tzu, the famous Chinese military theorist in his [seminal] work, The Art of War. Fundamental is his vision of knowledge, particularly self-knowledge and a view of the whole that seeks to weave conflicting views into a larger perspective.

“Expanding Sun Tzu’s insights,” Andrus says, “touches on a number of things in writing: movement within sets of defined structure, understanding human nature, and a view of a fully developed character in order to spark the recognition of his or her qualities in your reader. He notes that because all things are interconnected, you must know how each one affects the other.

“I could go on, but never fear, this question has prompted me to start putting together an outline for a presentation entitled Sun Tzu and the Art of Writing.”

Finally, we asked Andrus if he could put together his dream panel for ThrillerFest—participants need not be alive to be invited—who would be at the table, why, and what would the topic be?

“This one could be a hoot,” he says, “since it might well be better described as a séance. The topic? Crafting Your Thriller Within an Historically Accurate Context.

“I’ve chosen authors who have shaped my love of reading along with several more contemporary writers of military and historical epics. Tom Clancy and Stephen Coonts because of their work with current history. Then Herman Wouk, most famously known for his Winds of War, which I’m currently reading. I find his ability to turn a phrase, his descriptions and characters exceptional.

“My next two panelists,” he says, “would be C.S. Forester and Patrick O’Brian along with their characters Horatio Hornblower, Jack Aubrey, and his foil, Stephen Maturin. Both of these authors, in their epic series portraying the 18th-century English Navy, weave together complex characters within an historically accurate foundation of the era and life at sea.

“The fifth author would be Robert Elegant, author of Dynasty, another epic portraying incredible characters in an incredible setting—Hong Kong. My final panel member would be Allan Eckert, author of the historical Hawk Hill and Winning of America series. What I admire with Eckert is his meticulous research into American history and how he wove that research into the lives of his characters.”

Inviting authors and their characters? Let’s hope they all get along.