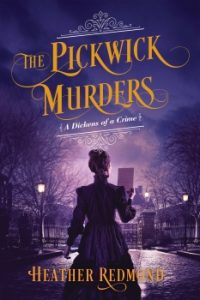 In a reimagining of Charles Dickens’s classic The Pickwick Papers, Heather Redmond’s fourth Victorian-era mystery in the Dickens of a Crime series finds a young Charles tossed into Newgate Prison for a murder he didn’t commit and his fiancée, Kate Hogarth, striving to clear his name…

London, January 1836: Just weeks before the release of his first book, Charles is intrigued by an invitation to join the exclusive Lightning Club. But his initiation in a basement maze takes a wicked turn when he stumbles upon the corpse of Samuel Pickwick, the club’s president. With the victim’s blood literally on his hands, Charles is locked away in notorious Newgate Prison.

Now it’s up to Kate to keep her framed fiancé from the hangman’s noose.

I hope they enjoy that I ventured into my main female character’s point of view for the first time in this book, instead of just sticking to Charles Dickens.

I am fascinated by the changes to policing in the 1830s and all the chaos involved.

My inspiration was The Pickwick Papers by Charles Dickens, and I wanted to bring in some sense of the rambling and story-within-a-story without boring the modern reader.

Heather Redmond is an author of commercial fiction and also writes as Heather Hiestand. First published in mystery, she took a long detour through romance before returning. Though her last British-born ancestor departed London in the 1920s, she is a committed anglophile, Dickens devotee, and lover of all things nineteenth century.