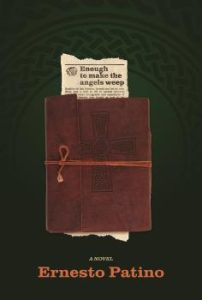 Hired to investigate the murder of an 84-year-old widow, PI Joe Coopersmith hits one dead end after another in his search for leads. With few clues and no suspects, he nearly gives up until he uncovers a connection to a bizarre plot to kill the descendants of Irish soldiers who fought for Mexico during the Mexican-American War. Known as San Patricios, they belonged to the St. Patrick’s Battalion, an elite Mexican unit composed mostly of Irish immigrants. When a well-preserved diary of an Irish soldier turns up, Coopersmith knows he’s on the right track. He digs deeper into the plot, soon learning the identity of the man behind it and his warped motive for the cold-blooded murder of the elderly widow.

Ernesto Patino recently spent some time with The Big Thrill discussing his latest mystery, ENOUGH TO MAKE THE ANGELS WEEP:

Throughout the book, I write about the Mexican-American War and how it affected the characters in my novel. Hopefully, readers will have a better understanding of the war and the misplaced belief that it was America’s manifest destiny to expand to the West.

Although my novel is a mystery, I wanted to tell the story of American soldiers of Irish descent who switched sides during the Mexican-American War. The biggest challenge was to provide historical facts and references throughout the novel without straying too much from the plot. Early on, a great opportunity presented itself when I realized that the best way to tell a story is through a diary. In this case, the diary of Kevin O’Leary, who emigrated from Ireland during the Great Famine. Kevin’s diary plays an integral part of my novel.

About halfway into the book, Kevin O’Leary’s diary reveals that while hiding in the home of a sympathetic priest, he meets and falls in love with a girl named Teresa. He continues to write about her until his final entry, months before the Americans finally leave Mexico.

Certainly, a question that’s worth asking is Why has the tragic story of the Irish soldiers who fought for Mexico not received the attention it deserved? noting that in Mexico and Ireland they are regarded as heroes, even to this day. Sadly, the answer is that the Mexican-American War was controversial from the start, and it was easy for historians to dismiss the Irish soldiers as traitors who deserved what they got. Fifty captured soldiers were ultimately hanged by the Americans.

Ernesto Patino has been a musician, soldier, schoolteacher, FBI agent, and private investigator. He is a multi-genre author whose books range from Mysteries and Thrillers to Romance and Children’s books. His published works include In the Shadow of a Stranger, Web of Secrets, The Last of the Good Guys, and One Last Dance. He lives in Southern Arizona with his wife Pamela, with whom he shares a passion for ethnic cuisines, classical music, and foreign films.