Between The Lines, Features, Latest Books
4 weeks ago
by Big Thrill Administrator
0

Starting a New Series with a Bang 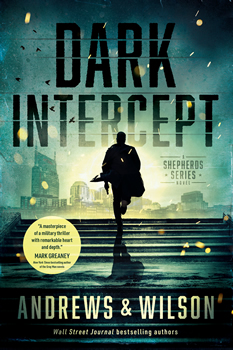 Authors Brian Andrews and Jeffrey Wilson have had a bang-up couple of years.

In addition to thrilling readers with installments of their popular Tier One and Sons of Valor series, the authors were tapped to continue W. E. B. Griffin’s legacy, and this month they kick off another new series—already optioned for television adaptation!—with a page-turning first book, DARK INTERCEPT.

The novel introduces us to Navy SEAL Jedidiah Johnson, who is forced to bid farewell to arms after a terrorist bullet cuts his career short. But when his high school buddy, David Yarnell, begs for help, he takes on a “last mission” to find David’s 12-year-old abducted daughter, Sarah Beth. At first, Jed is reluctant; he’s the kind of special operator more suited for search and destroy missions, not investigative work. But on a more personal level, his estranged friend David is married to Jed’s first love, Rachel.

To introduce a new character after the success of their other series’ leads, the authors knew they needed something unique, something special that would attract new readers and satisfy their long-time fans.

“The series has all of the covert ops and special warfare action that our fans have come to expect, but this time we add a new layer, and something we’ve not done before,” Andrews says. “In DARK INTERCEPT, it isn’t just terrorists our protagonists are facing off against—it’s something larger, darker, and more sinister.”

In a word, evil. The Shepherds Series poses a great question about a person’s beliefs with real-life action scenes depicting a good man doing the good fight, almost like a modern iteration of the Knights Templar from the medieval period.

“That’s right,” Wilson says. “In this series, we were able to combine our passion for realistic and gritty covert operations characters with plotting larger, faith-based themes of good versus evil, spiritual warfare, and crisis in faith. The latter, in particular, is something we are passionate about, having been through our own journeys of doubt and crisis in our faith in God—something all too common in people who have served in combat and have seen real evil up close.”

Jed Johnson is a character who’s driven by regret, a hero who has walked away from his faith when his own encounter with real evil shook his beliefs to the core. But now the only way to save Sarah Beth is to confront the very demons he’s spent his adult life running from.

“The alliteration was intentional,” Andrews says, “with a wink and nod to famous heroes who experience big transformations—Clark Kent, Peter Parker, Steven Strange. Hand in hand with the alliteration is his physical characteristics. He almost presents like a superhero, big and powerfully built. But like all heroes, he has an Achilles’ heel, and that’s a big part of the story. When we meet Jed, he’s broken—both physically and spiritually. Unlike John Dempsey from Tier One, or even Chunk Redman from Sons of Valor, Jed is (despite his Navy SEAL pedigree) an unlikely hero. Jed ran away from everything he loved—his family, his best friend, his first love, and his dream of becoming a pastor—when he encountered evil he didn’t understand as a teen. This choice, the choice to run, propelled him in another direction. He reinvented himself, becoming a Navy SEAL and rising to the rank of senior chief, leading his own platoon…he would have stayed in the Navy until retirement, but an injury cut his service short.”

Jed Johnson may present like a hero, but he bleeds like the next man. The action scenes in DARK INTERCEPT are detailed. Obviously, both authors have military experience, but they refrain from going overboard

“In all of our books, we strive to write action as true to life as we can,” Andrews says. “Of course, like in any novel, you need action, suspense, and a hero to root for, but we’ve built our brand around writing our characters as true to life as we know how, so we resist going over the top. We believe strongly that the superhero caricature of military thriller heroes actually diminishes the heroism rather than enhances it. We write characters with strengths, but also weaknesses and motivations that the reader can relate to. This is true to the men and women we had the honor to serve with in our military careers. What’s amazing about those serving at the highest levels in special warfare, in fact, is not how extraordinary they are, but how ordinary they are. What makes them incredible is that they are ordinary men and women motivated by intense love of their teammates, their families, their country, and their purpose to do something extraordinary. Overcoming human limitations to do something important—now that’s a hero’s journey!”

As usual with thrillers, each chapter begins with a time/place stamp—they’re one of the hallmarks of the thriller genre, a quick way to establish setting and avoid slowing down the action with descriptions—never open with the weather, right? Sometimes authors want to keep secrets from the reader; Andrews and Wilson devised a way to do just that.

“Our solution is ironically quite simple,” Andrews says. “If the character is unaware of their location or the time of day, the heading stamp reflects as much. In this book, for example, Sarah Beth is kidnapped and has no idea where she is being held, so the header simply reflects her confusion.”

As fate would have it, both authors have 12-year-old daughters—the same age as the secondary protagonist, Sarah Beth Yarnell. Obviously, this is no coincidence, and it allowed the duo to write with real emotion about how her kidnapping would impact her father. David Yarnell feels powerless to save his daughter and calls upon his childhood best friend to step in and save her.

Of course, there’s a story behind the story, and this project is something the authors have been playing with for some time—years, in fact, with no clear vision as to how to complete it. Then fate intervened in the way of a phone call from their friend Josh Hood, author of the Treadstone series, that got the ball rolling.

“He’d been on a flight home and sat with someone from Tyndale House who told him they were working to grow their action and adventure titles in the faith market, and he told them they should talk to us because we’d shared with him the idea for this series,” Wilson says. “Well, within a week we were in discussions with Karen Watson at Tyndale, and following a meeting of the minds, the series found a home. It’s funny how doors open at the right time. The connection is something really special, and we feel blessed by this opportunity to combine our passion for storytelling, military service, and faith into one series.”

With multiple series now, it may seem a complicated task to determine which plot idea belongs to each series. Nothing could be further from the truth in this partnership—the authors have a system with all the kinks ironed out.

“Every novel is a journey, and we let the characters guide us,” Andrews says. “We start each project with a ‘what if’ question, but we don’t always have the answer to that question when we start putting pen to paper. The hero is making choices. The villain is making choices. And collectively, that creates a thrust and parry situation in the narrative that makes the journey exciting and sometimes unexpected for us as the creators. I think that’s the reason we don’t struggle with ideas or plots despite writing four series at present. The characters in the series certainly don’t know their struggles are fiction.”

On the Cover: Stephen Graham Jones