The Blessed Bones by Kathryn Casey 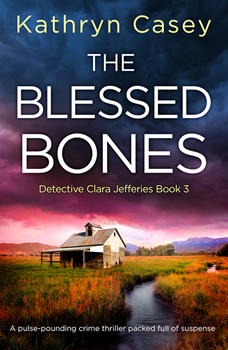 As THE BLESSED BONES opens, a photo resurrected out of Utah’s secret files sends Police Chief Clara Jefferies in pursuit of justice. At the same time, the badly decomposed remains of a pregnant Jane Doe are discovered in a shallow grave. The two cases converge, while in a dark cellar room another pregnant teen is held captive. As the pieces come together, a horrific picture emerges, and Clara struggles to find a way to save her own life, along with those of the young girl and her baby.

The novel takes place almost exclusively in the world of fundamentalist Mormons, a community that author Kathryn Casey has written about but is not her own. What kind of challenges did that present?

“You’re right,” Kathryn says. “This isn’t my world. And I’m not saying that a brief stint inside it as a journalist makes me an expert. Back in the ’90s, I spent a week interviewing folks in a polygamous town much like my fictional Alber, Utah. I was working on a magazine piece, and I left fascinated by the place, the people, and the stories I’d heard. Memories of that place have stayed with me over the years, and I’ve always wanted to write a book set in such a place.

“No one should make snap judgments. There are all sorts of people with varied experiences living in every type of community. When I was in that polygamous Utah mountain town, I met devoted and kind people, many whose families had been polygamous for more than 100 years. I also talked with those who were terribly unhappy and some who felt trapped and used by the higher-ups in their religion. As I prepared to write the series, I added to my knowledge by reading memoirs written by those who have fled such societies. The result, I hope, is that Clara’s world is a varied human landscape, a society in which not everyone is good but, as in the real world, a small percentage are truly bad.”

The novel features a strong female lead—who’s clearly in charge—in the midst of a community not known for valuing women beyond their household responsibilities.

“That does set up quite an unusual dynamic in the books,” she says. “Clara Jefferies is an apostate, a former true believer who has turned her back on polygamy and her faith. Since returning to Alber in book one of the series, The Fallen Girls, she’s walked a thin line between yearning for and fearing her past. As police chief, her status haunts her. Most of the members of Elijah’s People follow the edicts of their prophet and shun apostates, which puts Clara in a difficult position when she works a case. Not everyone will talk to her, which tends to complicate investigations. Yet she pushes through and moves ahead, refusing to back off.

“In each book, she wins over a bit more support. Yet there are those in Alber who want Clara gone and the town back the way it was before the feds invaded, arrested their prophet, and put him behind bars for marrying off young girls to older men before the intruders filtered in.”

It’s time for the classic—hopefully not cliché—question about research: How much—and what kind—has been  done for this series regarding the fundamentalist Mormons and also the faith of those who believe in herbal remedies?

“My career is truly a journey,” Kathryn says. “When I spent that week in that polygamous town, I was working as a magazine writer. I did that for 20 years, traveling the US, interviewing folks for feature articles. In the years that followed, I wrote 11 true crime books based on sensational murders. I’ve interviewed killers, survivors, victims’ families, cops and prosecutors, defense attorneys, and medical examiners. So I have a strong background in the crime/law enforcement world I’m writing about in both of my mystery series.  (The other is the Sarah Armstrong Mysteries.) That aspect of the books isn’t a push. When I do hit a wall, I call a cop or a medical examiner friend and ask: ‘What would you do under these circumstances?’ But for the most part, I feel prepared.

“On the other hand,” she says, “things habitually pop up that I’m less familiar with. I’m not an herbalist. So, when I made Clara’s mother, Ardeth, a purveyor of home-brewed remedies, I did what I always do: I read books on herbalism. I then watched online videos, kind of cooking classes, by various practitioners. When I had specific questions, I found a source who could advise me.”

THE BLESSED BONES is told through three points of view: Clara’s, Chief Deputy Max Anderson’s, and the young lady in crisis. What choices were behind that decision? What are the benefits and pitfalls of multi-POV crime novels?

“In most books that have one point of view,” Kathryn says, “the reader knows what the protagonist knows at the time that she knows it. It is then fairly easy to keep the reader focused on the investigation as it unfolds. What I enjoy about multiple POVs is that they offer the opportunity to build suspense by showing that off-screen events are occurring that influence the plot and push the action. It also works well to have a character like Max, someone who reports on events from a different perspective. Max’s comments add more insight into Clara and her world. The biggest challenge I’ve found of multiple POVs is a writer has to keep the alternate POVs from revealing too much and ruining the surprises, giving away the plot.”

Finally, I brought up Casey’s strong background in the true crime genre and asked her to speak about the similarities and differences between writing true crime and writing crime fiction.

“I’ve investigated and reported on real murders—first for magazines then books—since the ’80s,” Kathryn says. “I’ve covered a ton of cases. It’s been an incredible education and has given me a plethora of material for plots and characters. But true crime is very different than fiction. In the true crime books, I don’t get to make anything up. The plot and the characters are all there, written in stone, real. In fiction, I can write out a character who makes too many predictable choices or one who refuses to fit into the dramatic arc. In true crime, none of that is an option.

“So for me, fiction is incredibly freeing. For once, I’m in control. Although the characters do take over at times. But that’s another question not asked here.”

Kathryn Casey is the creator of the Clara Jefferies and Sarah Armstrong mystery series and the author of eleven highly acclaimed true crime books. Her first novel, Singularity, was included on Booklist’s best crime novel debuts, and Library Journal chose The Killing Storm as one of the best mysteries of that year. True crime matriarch Ann Rule called Casey “one of the best.” #1 New York Times bestselling author Gregg Olsen said Casey is “a true crime great.” A frequent television and radio commentator, Casey has appeared on The Today Show, Good Morning America, Dateline, 20/20, and many other programs.