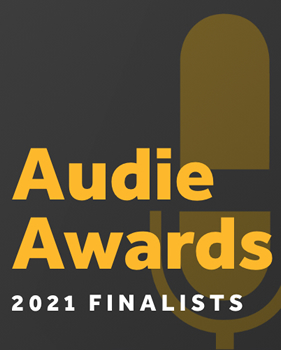 I attended the 2020 Audie Award Gala on March 2 last year. It was a sparkly, exciting, energy-filled event. Everyone at the Gala was aware of the potential pandemic. While people gathered and hugged, there was a sense that something was changing out there.

The good news is that the 26th annual Audie Awards Gala took place this year, produced virtually and live streamed on YouTube for all to enjoy safely from home.

Let’s look at the winner and finalists in the Mystery category:

For fans of Connelly’s Jack McEvoy series, it has been a long wait to get to Book 3. Giles is very effective at performing the journalist at his most persistent and self-righteous self, now working for an online news organization called Fair Warning. Narrator Zach Villa is brought in to voice the chilling villain, The Shrike. We get to hear from former FBI agent Rachel Walling, who also appears in the Harry Bosch series. Listeners will be treated at the end to a bonus of Michael Connelly in conversation with the real Myron Levin, the founder of the actual news organization, Fair Warning.

Narrator Lorelei King, who is well-known for her delivery of Janet Evanovich’s Stephanie Plum, brings her talents for creating and differentiating characters to the first audiobook in this humorous, character-driven series. 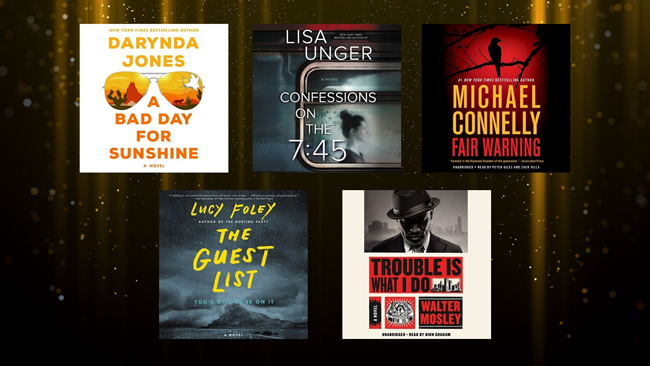 CONFESSIONS ON THE 7:45
by Lisa Unger, read by Vivienne Leheny
Harlequin Audio

While it seems inspired by Patricia Highsmith’s Strangers On A Train, this time with two women meeting on a train—but then it takes off in very different directions. Leheny masterfully voices the different personalities and keeps listeners in a constant state of wondering who or what to believe.

I always appreciate when a publisher provides listeners with a full cast, especially in an audiobook where the author delivers the story through several different points of view. Each narrator very effectively creates their character. It is a locked room mystery—this time on a beautiful but dramatically dangerous isolated island where a group of friends come to celebrate a wedding. But they all bring their deep, dark secrets with them.

TROUBLE IS WHAT I DO
by Walter Mosley, read by Dion Graham
Hachette Audio
AudioFile Earphones Award

This is what you get when you match a master storyteller with a multi-talented narrator who is in perfect step with the audiobook’s pace, tone, and characters. Golden Voice Dion Graham, who earned an Earphones Award for this audiobook, sweeps you into Mosley’s noir story and the mind of PI and fixer Leonid McGill.

You can see all of the finalists here  in the Thriller/Suspense category and note that Lee and Andrew Child’s first partnering, The Sentinel, read by Scott Brick, is on the list. The winner, When No One Is Watching by Alyssa Cole and read by Susan Dalian and Jay Aaseng, was the author’s first venture into the thriller genre and is definitely a listen you can’t put down.

Also, one of the finalists for Best Female Narrator was Imogen Church for Ruth Ware’s One By One. This audiobook was one of AudioFile’s 2020 Best Audiobooks, and if you haven’t already, you can watch a great conversation with Imogen Church and more mystery narrators in this panel conversation hosted by AudioFile.

For Best Male Narrator, the finalists include another one of AudioFile’s 2020 Best Audiobooks, Louise Penny’s All The Devils Are Here, narrated by Robert Bathhurst. You can listen to an interview with Robert Bathurst here.

What a great collection of audiobooks to explore. I hope you had a chance to celebrate the 2021 Audies, but if not, you can always jump on and watch the recorded video of the event. There were many familiar faces and voices from the world of audiobooks gathered for an amazing evening celebrating audiobook excellence.