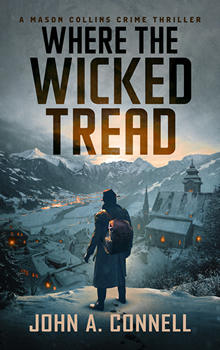 Mason Collins is the hunter and the hunted in John A. Connell’s WHERE THE WICKED TREAD. It would be one thing if Mason was traveling solo, but he’s protecting a young mother and her son, plus he’s agreed to see a group of Jewish refugees to their transport in Palestine. If he survives the journey through Italy’s Brenner Pass and points south, he plans to meet up with his true love, Laura, in Naples.

Set in 1947, this is the fifth installment in Connell’s chronological adventure series set in the aftermath of World War II that features Mason Collins.

The idea for WHERE THE WICKED TREAD was born in the vast amount of research Connell had already done for the series. This research made him “aware of the ratlines” and the more he read, the more he “wanted to put Mason there, searching for a wartime nemesis.

“I did lean heavily on three books dealing with the history of the ratlines (escape routes for Nazi war criminals) and more specifically the Italian route from South Tyrol to Rome, then to the ports of Genoa or Naples,” he says. “It turns out that slice of history is well documented, and those three books were dense with material. Far more complex than I could possibly portray in one story.” 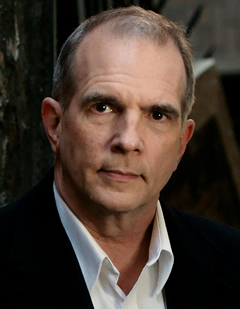 Writing about this road trip of Mason’s was one of the joys Connell had in writing WHERE THE WICKED TREAD.

“The other joy was creating a storyline for the former Jewish soldiers in the British Army who stayed behind after the war to assassinate Nazis,” he says. “These same men then turned from taking lives to improving them by smuggling Jewish refugees down the same route as the ratline in an attempt to get them to Palestine. I could see writing a whole novel about these guys.”

Connell could write a list of things he discovered or that surprised him, but one of the most surprising was the involvement of the Vatican. “Certain factions within the Vatican were one of the principal enablers for the Nazi fugitives escaping Europe,” he says. “And they colluded with a contingent within the International Red Cross to generate false identity papers and obtain visas to enter countries in South America and the Middle East.”

Mason started as a villain in Connell’s early writing, but Connell liked him better as a hero with a dark side he strives to control. The chronological nature of the series has allowed Connell to mold Mason’s personal journey, and he has begun “to heal and grow in many ways. He’s still vulnerable to dark impulses, which I enjoyed exploring in To Kill a Devil, though the experiences in that novel helped him temper those impulses…at least for now.”

Connell used first person in WHERE THE WICKED TREAD for the story to be “more up close and personal, to go deeper inside Mason’s head. It’s a personal journey for Mason, and I wanted to have the opportunity to express more of Mason’s inner conflicts and emotions. I … really enjoyed letting Mason do the talking.”

The pandemic affected Connell in several ways. He was unable to actually travel the routes taken in WHERE THE WICKED TREAD, and is looking forward to exploring and revisiting Italy when able to travel. He also found himself easily distracted, and “fretting over the tragedy of the pandemic has been an impediment. It took some major willpower to continue with the book and get it done.” A darkened room has helped, although he admits it does take him a while to get started writing. He listens to a variety of music when writing and writes in sprints of 40 to 60 minutes duration with breaks in between.

One of Connell’s favorite things about being an author is hearing from readers. “I’ve received a couple of lovely emails from WWII vets,” he says. “I was delighted to read that they found the books so close to their own experiences in occupied Germany. I also heard from people who lived there with their army parents as children, from former military police and CIC intelligence officers, former cops and detectives, and from a couple of German readers who were young during that time in Germany.”

Thankfully, there are more adventures featuring Mason Collins coming our way. Connell sees the series continuing as long as he can keep the stories fresh and “until I feel it has run its course.”

John A. Connell is a 2016 Barry Award nominee and the author of the Mason Collins series: Madness in the Ruins, Haven of Vipers, Bones of the innocent, To Kill a Devil, and WHERE THE WICKED TREAD, and the historical crime thriller Good Night, Sweet Daddy-O. John has worked as a cameraman on films such as Jurassic Park and Thelma and Louise and on TV shows including NYPD Blue and The Practice. Atlanta-born, John spends his time between the US and France.