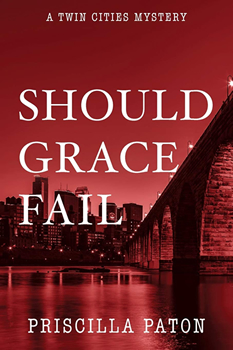 When a man who saves lives has his brutally taken, two Metro detectives are tasked with the difficult task of solving the murder. But there’s more to this case than meets the eye.

The murdered man rescued trafficked teen addicts from a notorious crime boss, but he was also an alcoholic who left the police force under suspicion. Now, Erik Jansson and Deb Metzger must discern whether the killer is a drug dealer, a pimp, a corrupt police colleague, or even a victim who lashed out to save her savior.

SHOULD GRACE FAIL is not your typical police procedural. While on the case, Jansson and Metzger are pushed over a riverbank, off a golf course, and into a tiger enclosure—and that’s only the beginning of their life-and-death battle to solve not only the case, but to also save others from a similar fate.

In this The Big Thrill interview, author Priscilla Paton shares insight into this latest installment of her Twin City mystery series, her writing inspirations, and what genre conventions she hopes to upend in SHOULD GRACE FAIL.

A certain kind of manipulative crime caught my attention. But before the plot developed, the characters that could be victims of such a crime popped into my head. Also, the recurring characters in the Twin Cities Mysteries always live with me—Detectives Erik Jansson and Deb Metzger, both in their thirties, both athletic, both attracted to women. My mysteries are character driven, with a Minnesota flavor and a plot that evolves as the characters evolve.

The challenge and the opportunity are the same: an empathetic inclusion of diverse characters. My detectives, like myself, are White and middle-class. But my detectives, again like myself, live and work in a diverse world. A major character, Jaylyn Dudek, is mixed race; she’s also a classical pianist. Another young woman, Luna, has been diagnosed with a fetal-alcohol-related disorder. Their portrayals required research, listening, and the input of a diversity reader.

SHOULD GRACE FAIL is a “warped” procedural that’s both heartbreakingly serious and wildly funny. That’s why Kirkus calls Twin Cities Mysteries a “philosophical” series that takes on heavy issues, while other commentators talk about “endearing characters” and the “unusual and highly enjoyable” detectives.

The detectives upend the conventions of Scandinavian Noir. Typically, the noir detective is damaged, dark, and saturated in bad coffee and cheap booze. Erik Jansson, of Norwegian-Swedish descent, is darn healthy, and his family has not been murdered. He does drink bad coffee. Deb Metzger introduces herself as 6’2″ (in boots) and lesbian with a chip on her shoulder the size of a concrete block. Their “rapport” is a work in progress.

So many. P.D. James impressed me with her brilliance. Rex Stout in the Nero Wolfe books with the wit. Louise Penny with her quirky but admirable characters. Walter Mosley for style and social unease. Donna Leon for being ironic, bemused, and serious, and for making her Venice setting integral. I owe a big debt to another Minnesota writer, David Housewright, for getting me started. And literary writers Richard Russo and Louise Erdrich proved that tragedy, social awareness, and comedy can merge in a powerful story.

Is there a question that you feel is important to you and/or your novel?

What does it involve to give your utmost to a calling, and to help others? The four POV characters confront that question. Erik and Deb as stressed detectives who have to be suspicious, Jaylyn Dudek as sympathetic to endangered friends while she’s determined to excel at music, and middle-aged Gordy, a recovering alcoholic whose mission is to help others to sobriety. The answer? The involvement can cost them dearly, but without that commitment they can’t be their full selves.

Priscilla Paton grew up on a Maine dairy farm and now lives near Minneapolis and St. Paul. She recently escaped from a career as a professor-scholar to write the Twin Cities Mystery Series. The first in the series, Where Privacy Dies, was a finalist for a Foreword Indies Award. SHOULD GRACE FAIL is available December 2020.