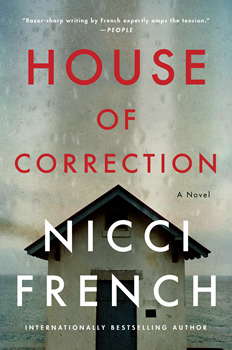 They say the truth will set you free—but it could also keep you in prison.

Bestselling writing-duo author Nicci French—husband and wife team Nicci Gerrard and Sean French—weaves a tale of desperation and a woman’s fight for survival in a world where loneliness is the norm, and depression threatens to destroy everything.

Tabitha Hardy awakens in the middle of the night. “The screaming started at three in the morning. Tabitha had never heard a human being howl in that way before.”

Tabitha is in a cell at Crow Grange Prison for women, “four paces long, three paces wide, [with] a tiny, barred window.” They’d arrested her for the murder of her former schoolteacher, Stuart Rees, after finding his body in Tabitha’s shed. She’s certain it must be a horrible mistake—it has to be—and is sure someone will sort it out soon.

Tabitha has no parents to phone, no other close relatives. She tries to think of friends to contact, but she’s lost touch with people. They’d moved or drifted away. She has no one.

When she and her appointed defense attorney discuss the charges, Tabitha hopes the woman can just fix the error of her arrest. But when the lawyer suggests she plead guilty to manslaughter, Tabitha knows she must take matters into her own hands. She didn’t kill Stuart. At least, she doesn’t believe she could commit murder, even though her memory of that day is a blank.

Against everyone’s advice, Tabitha will represent herself in court and conduct her own investigation. No one believes she’s innocent, and she’s not sure herself. But Tabitha vows to uncover the truth.

Because a tree had fallen across the road the day Stuart was murdered, there were only a handful of people in her town of Okeham who could have killed him. Tabitha interviews each person and meticulously reviews the town store’s CCTV footage, which captured everyone who could have gone to her home that day.

What Tabitha uncovers unnerves her.

Tabitha “felt like she had lifted a stone on Okeham, so that the pretty little village by the sea where visitors came to eat ice creams and stand at the spot Coleridge had once stood, where everyone knew each other and helped each other, was revealed as a place crawling with petty resentments, jealousy and malice.”

Tabitha must find the answer to the question “Who killed Stuart Rees?” before she’s sentenced to a never-ending prison term. Unlike the prosecutor who treats the trial like a game—“Some you win, some you lose, no hard feelings, you have a drink afterwards”—she knows her life is at stake.

In this tale of desperation and murder, a vulnerable woman resolves to risk her freedom by uncovering the truth of who killed a respected citizen of the community. Readers who love stories of empowered underdogs will cheer for Tabitha as she pieces together the facts that will prove her guilt or innocence.

Here, French chats with The Big Thrill about the inspiration for the novel, writing about depression, and the art of two authors writing as one.

What inspired the story in HOUSE OF CORRECTION?

The idea of a woman who has to solve a crime from inside prison grabbed us. More than that, it was a crime that they accused her of. The idea of a detective who can’t do any of the normal things that detectives do intrigued us: she can’t visit the crime scene or interview suspects. The original idea was for the entire novel to take place in the prison, but, once we encountered our heroine Tabitha—angry, depressed, solitary—we realized we wanted to see her in court and have her conduct her own defense.

How much research into the legal process did the story require (both on the prison side and the courtroom side)?

With the prison setting, it almost happened the other way around. Over the years, we’ve visited prisons to talk about books and reading. There is something very particular about the actual physical experience of being behind those walls, with the locks and the barbed wire, and for years we’d wanted to convey that in a novel.

The courtroom scenes required a different kind of research—we spent days at the Old Bailey observing trials. The British legal system is a world of its own—highly traditional, with its own strange rituals and complex rules. For Tabitha to get it all wrong, we had to be confident of getting it right. It took a lot of study.

Why are your protagonists strong and independent, yet vulnerable, women?

As Margaret Atwood said: “men are afraid that women will laugh at them, women are afraid men will kill them.” We live in a world where women have achieved notional equality, but there is still a physical vulnerability when push comes to shove, and then shove comes to something worse. At the beginning of HOUSE OF CORRECTION, Tabitha is neither strong nor independent, but she realizes that nobody is going to rescue her, so she has to find those qualities in herself.

How and why did you incorporate the debilitating condition of chronic depression into the novel?

We wanted to start the novel with Tabitha at rock bottom, then make things worse for her. The idea is not only that enemies surround her, but she is her own enemy. Depression isn’t often portrayed in fiction because it’s so passive, and we like to see our main characters being active. But it was important to the story that she start depressed, and it was also true to so many people’s experiences in prison. Depression in prison is almost a logical response because most prisons—at least in the UK—are deeply depressing places. Of course, that’s only the beginning: this is a story of recovery, of the capacity of a woman to bring herself from the dark into the light.

Yes, the main message is for our readers to enjoy the book! Beyond that, we hope readers may think a little differently and more sympathetically about the people who spend years behind walls and barbed wire.

As a writing team, what is your process?

We talk about the ideas together and do all the planning and research together. We both went into prisons, and we both watched trials. But once we start writing, we never sit in the same room (except when we’re not writing). One of us will write a section—Sean in a shed in the garden, Nicci in an attic—then email it to the other who is free to rewrite, edit, add, whatever seems right. Then we continue writing and pass the book back and forth until we finish.

There are many things to say about this, but two of them are: 1) the editing and rewriting isn’t Nicci trying to make Sean’s prose more like Nicci’s and Sean trying to make Nicci’s more like Sean’s. We’re both writing as Nicci French, who is a different writer from either of us, and 2) the process of collaboration is messy and complicated, but it’s mainly about trust. We both know that when our prose is rewritten, it’s not a struggle for control. It’s all about the book. What does the book need? What’s best for this particular story?

Having said all that, it’s a mysterious process. After all these years doing it, we still don’t understand how it works.

Tell us something about yourselves your fans might not already know.

Sean speaks pretty fluent Swedish. His mother is Swedish, and, as a child, he spent his summers there.

Among other things, in her spare time, Nicci is a qualified humanist celebrant—she conducts funerals for people who want non-religious ceremonies.