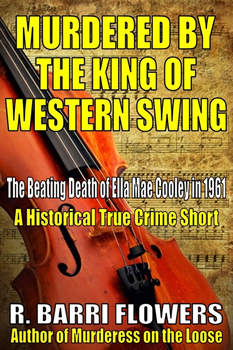 The cruelty of the crime was shocking to local residents in the normally idyllic community. A greater shock was that the murder was committed by the victim’s fifty-year-old husband, Donnell Clyde Cooley, a well-known big band leader, musician, actor, host of a television variety show, and businessman.

See how this tragic story of celebrity, suspicion, and homicidal rage unfolds in the historical crime of passion.

The Big Thrill caught up with bestselling author R. Barri Flowers to discuss his latest true crime book, MURDERED BY THE KING OF WESTERN SWING:

I hope that readers will gain more insight into the correlation between jealousy, marital discord, domestic violence, and murder, as indicative of too many relationships that end in tragedy.

It delves into a historical true crime that shows how what goes around, comes around as it relates to the age-old relationship between jealousy and homicidal rage. The book also chronicles how one can go from stardom to murderer in the blink of an eye.

I was not familiar with the concept of a Western Swing musician, which is a subset of country music. This figures into the historical true tale and the tragedy that unfolds.

Spade Cooley had a lot going for him as a country music star, television personality, and businessman — who threw it all away in a crime of passion, which cost him dearly.

Many authors and books have influenced me along the way of a long career in writing. These include such authors as Truman Capote, Daphne du Maurier, Sidney Sheldon, and John Steinbeck, among others.

Books that come to mind include The Hound of the Baskervilles, Far From the Madding Crowd, 84 Charing Cross Road, and Helter Skelter. 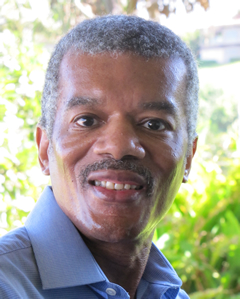 R. Barri Flowers is an award-winning criminologist and bestselling author of more than one hundred books, including true crime, criminology, thriller fiction, and young adult mysteries.

True crime titles include Murder During the Chicago World’s fair, Murder of the Doctor’s Wife, The Sex Slave Murders 1, 2, and 3, The Pickaxe Killers, Murder at the Pencil Factory, Murder of the Banker’s Daughter, Killers of the Lonely Hearts, Dead at the Saddleworth Moor, and The Dreadful Acts of Jack the Ripper and Other True Tales of Serial Murder and Prostitutes.

Fiction titles include mysteries and thrillers A Reason to Live, Before He Kills Again, Dark Streets of Whitechapel, Dead in Kihei, Dead in Pukalani, Deadly Defense, Fractured Trust, Murder in Maui, Murder in Honolulu, Murder of the Hula Dancers, Murder on Kanapali Beach, State’s Evidence, and Justice Served.

As an expert on violent criminality, R. Barri Flowers has appeared on the Biography Channel, Investigation Discovery, and Oxygen television documentary crime series.