Using Humor to Crawl From the Darkness 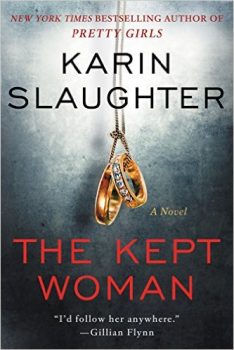 One of the most memorable moments at Thrillerfest this past year took place during an interview between Karin Slaughter and Gillian Flynn. It was more than just two superstar authors sharing the stage, but the way in which the conversation unfolded—candid, funny, and at times, perhaps, wildly inappropriate.

Obviously the authors are great friends, but for the millions of Karin Slaughter fans around the world, the interview wouldn’t have come as a shock. That’s the persona this internationally bestselling author has cultivated, someone who is approachable, honest, and unabashedly unflinching in delivering a blunt—and often hilarious—speech to audiences of all sizes.

Of course, that kind of crowd comfort didn’t come naturally.

“I clearly remember attending my first Bouchercon,” Slaughter says. “My voice trembled and my hands were shaking. Part of it is doing the same thing over and over. I’ve burped into a mic, slurred my words. I’ve done every single thing, so who the fuck cares?”

Actually, Slaughter does. It was at that same conference where she learned a valuable lesson about being accessible to her fans. Primed to meet her favorite author at the time—a thriller writer who shall remain nameless—Slaughter was snubbed on introduction. The experience stung.

“We often don’t recognize shyness in other people and can mistake it for something else. But when you think about it, it’s a real luxury to be rude to people,” she says. “Most writers are introverts by nature. In my author life, I can’t be that way to my fans. I need to be more accessible.”

Considerate, right? Absolutely. But that accessibility stops at the door of her writing office, where Slaughter admits her fans are the last people on her mind. As an author known for writing tight, page-turning, often violent and complex thrillers, Slaughter goes deep into the creative zone—a place no reader has any business being.

“I think it’s important to tune people out,” she says. “If you’re cognizant of the fact you could be pissing people off, it can paralyze you. I don’t care if you hate the characters—I just want you to care what that character does next. My job isn’t to write characters that you love.”

That’s clear with THE KEPT WOMAN, Slaughter’s 8th book in her popular Will Trent series. The book marks the return of Trent’s nemesis Angie Polaski, a decidedly unlikeable character whose name doesn’t even make the jacket blurb, but is nevertheless on every reader’s mind as she commands the stage in a good chunk of the novel. (Less than 100 pages, actually, but her presence feels so much bigger…)

“Angie’s a horrible person,” Slaughter admits. “I love that. She’s one of my favorite characters to write because she’s so bitchy—and she embraces it. But you do have to be careful when writing those kinds of characters because they can eat up the book. It’s a real tightrope.”

More so, even today, as a female writer. Slaughter notes that pop culture has certainly become more accepting to “bad girls” in storytelling but an uncomfortable stigma still lingers. Take the groundbreaking TV show Breaking Bad, for instance. Although Walter White was a very “bad” man, it was his wife’s character—the one grappling for moral ground—that was hated by viewers, so much so that the actress, Anna Gunn, received hate mail.

Slaughter says the first time she wrote about Lena Adams, another of her somewhat unlikeable characters, she experienced her own flood of negativity.

“A lot of people thought I had made a mistake,” she says. “Because it wasn’t something you saw in a lot of fiction written by women. That made me laugh.”

And obviously didn’t deter her. After taking a break from her series with last year’s gripping standalone thriller, Pretty Girls, Slaughter is happy to be back in Will Trent’s world with feisty females, gritty crimes, and unlikeable characters.

THE KEPT WOMAN finds Trent at one of his most vulnerable moments. While investigating the horrifying murder of an ex-cop at an abandoned construction site owned by a known rapist, more blood is discovered and a second victim is identified—a woman who will die if she isn’t found. Worse, the evidence links the scene to Trent’s past, and threatens not only his sanity, but the lives of his friends, colleagues, and family.

Part crime procedural, part psychological thriller, paced with unrelenting speed, and ensconced in the tough-to-read issues Slaughter tackles with absolute mastery, THE KEPT WOMAN is yet another example of why millions of readers clamor for her books and fight for a seat at one of her engaging talks. Inevitably, the discussion turns to her writing process (she prefers seclusion and absolute quiet), how she gets so deep into her characters’ heads, and why she doesn’t steer clear of emotional hot topics such as rape and violence to women.

“When I write about crime, I want to talk about how it affects a community, the victims, and even the survivors, because sometimes there are some,” she says. “I don’t want to write in a bubble. In the 80s, I read books about sexual assault where the woman was healed by the love of a good man. Come on. That’s not real life. I wanted to show it for what it really is.”

But going so deep comes at a price.

“It’s draining,” she says. “The emotions of the characters stick with me longer than the topics. I’d rather run a marathon than write that stuff sometimes.”

Luckily for readers, Slaughter isn’t planning to strap on those Adidas any time soon. 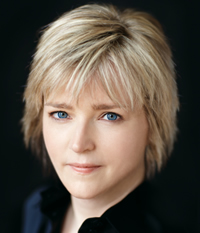 Karin Slaughter is one of the world’s most popular and acclaimed storytellers. Published in 33 languages, with more than 35 million copies sold across the globe, her fifteen novels include the Grant County and Will Trent books, as well as the Edgar-nominated Cop Town and the instant New York Times bestselling novel Pretty Girls. A native of Georgia, Karin currently lives in Atlanta.