Moonlight has hit some turbulence. Sure, his bar burned to the ground; his significant other, Lola, left him for another man; the private eye business is slow; and his evenings are now spent with his new pal, Jack Daniels. But this is real turbulence—in a plane, going down fast, and he’s waking up handcuffed to an FBI agent. How he got there is a little fuzzy, thanks to the sliver of a .22 caliber hollow-point bullet lodged in his brain.

Once on the ground, and after a few bumps and bruises, things become clearer and more dangerous. Thinking he’s been brought to FBI headquarters for drunk-dialing the IRS, Moonlight learns that he’s got some unfinished business: his last case, which had him up against Russian mobsters in search of a zip drive loaded with government secrets, isn’t exactly closed. The cop who was supposed to deliver the goods to the FBI went rogue, bringing along a crooked agent and Moonlight’s ex, and now he’s out to sell the hardware to the highest bidder. The FBI wants Moonlight’s help in tracking down the trio—all the way to Florence, Italy—and wooing Lola into handing over the zip drive. He’s just going to have to outwit, outrun, and outshoot the Russian thugs who have their own big plans for the zip drive, and for Moonlight.

I would imagine being a photojournalist has helped you to create suspense plots. Can you tell us of an experience in your career, where you weaved what you witnessed into a book?

Almost all of my books start out with something that I’ve witnessed as a journalist or that has already happened. The Innocent came about from an actual prison break that occurred at Green Haven Prison in New York. The Disappearance of Grace is based on a recent NATO airstrike of a hostile Tajik mountain stronghold, The Concrete Pearl concerns a phony asbestos abatement racket that some sleazy characters got away with for a while in Albany.

In the case of the Moonlight series, the real stories are a bit more personal. While MOONLIGHT FALLS started off with a real illegal body harvesting operation that I’d read about in the NEW YORK TIMES or some such paper, many of the characters and events are more or less based on my own real life experiences and the real people who participated in them.

The Lola in the books, Moonlight’s on again/off again love, is based on the tumultuous relationship I’ve had with Laura, my current significant other who also happens to be my divorced second wife. (Yup, you read that right). I dedicate all the Moonlights to her. And much of Lola’s dialogue comes straight from Laura’s mouth.

In BLUE MOONLIGHT, the guesthouse in Florence where much of the action takes place, Checco the double agent, the apartment in which Lola lives with her new boyfriend and Moonlight’s enemy, are all real. It’s not hard to make things up when many of the experiences, settings, and characters are the real deal and your imagination is kind of wild.

What will readers love about your character Dick Moonlight?

The fact that he can die at any moment due to a tiny piece of .22 caliber hollow-point bullet lodged inside his brain directly up against his cerebral cortex offers him an odd perspective on life.

While he often does the wrong thing or, due to his condition, makes the wrong decision, he is dedicated to finding out the truth behind any case he becomes involved in. He also wants to do what’s right at any cost even if that means breaking the law.

You see the paradox there. He is also loyal to a fault. He would follow his Lola to the ends of the earth, even after she has fallen in love with someone else. I guess there’s a little bit of Moonlight in all of us. Only in him, things are more exaggerated and transparent.

What do you hope they will take away after reading BLUE MOONLIGHT?

That even the seemingly smallest of mistakes can snowball into the worse shit storms possible. And, yes, in that very, very corny way: true love never dies.

What is your favorite piece of dialogue that you’ve given Dick Moonlight in this book?

“Mirror, mirror, on the wall, who’s the most fucked up one of us all? Richard ‘Dick’ Moonlight. That’s who.”

What inspired you to make the transition from journalism to fiction writing?

When I started out, I modeled myself on the old guard writers like Hemingway and Martha Gellhorn. They both started out as newspaper writers (Gellhorn and I started at the same paper, The Times Union in Albany) and eventually became freelance journalists which led to a career in fiction. I just figured if it worked for them it could work for me.

BLUE MOONLIGHT takes the reader to Florence Italy. Have you been there yourself? If so, what was it about Italy that inspired you to send Dick Moonlight there?

I spend about three months a year in Florence, writing, eating, drinking, traveling, and just generally messing around with the friends I’ve made there over the years. Jim Harrison likes to escape to his cabin in the Michigan wilderness in order to write. Hemingway used to rent one hotel room in Bimini for writing in solitude and another where his mail would be forwarded. I’ve somehow come to the conclusion that I need Italy in my life in order to be creative and to be somewhat alone with my crazy thoughts.

What’s the best thing about being a suspense author?

In journalism you have to tell the truth with objectivity. Theoretically speaking, that is. With fiction, especially suspense, I have an obligation to create and make things up, even if the impetus for the story was derived from a factual event. I like to write stuff that I’d like to read so if I’m not having fun while writing, than no one else will have fun. At least, that’s the way I see it. Some critics might stab at me with the old, “That would never happen” admonition, but I beg to differ. When it comes to the Moonlight series, anything can and will happen. That’s the pure fun of it.

If you could write yourself into BLUE MOONLIGHT for a walk on scene, who would you be, and what would you say in that scene?

I’d be sitting at a café table inside the Pizza del Duomo sipping a glass of vino russo and reading the International Herald Tribune. I’d be dressed in black pants, black leather coat and sunglasses. When a panting Moonlight races up to my table while being chased by gun-toting Russian thugs, his eyes looking lost and forlorn like he hasn’t a clue where to hide, I would casually tell him there’s a secret door located on the back side of the cathedral that leads to an old tunnel that ends somewhere in the city center. Then I’d hand him the key to the door. “Go now,” I would insist. “Go. Now. Live.”

“READERS WILL BE HELD CAPTIVE BY PROSE THAT POUNDS AS STEADILY AS AN ELEVATED PULSE.…Vincent Zandri nails readers’ attention.” –BOSTON HERALD

“This story, as all Dick Moonlight stories are, is filled with action and violence and a touch of humor. Dick has to go to Florence, Italy find that zip drive while rescuing the love of his life, Lola. Will he be able to do it? Tune in and see for yourself. I thoroughly enjoyed it.” –Janice Sims, Amazon “Vines Reviewer” 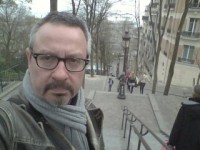 Vincent Zandri is a photojournalist, world traveler, and the author of more than thirteen books from publishers such as Delacorte Press, Dell, Thomas & Mercer, and more. An Amazon Number 1 International Bestseller, since April 2011 he’s sold more than 300,000 e-book and paper editions of his titles. Many of his novels are about to enter into their second and third editions. He also has new novels, novellas, and shorts coming from StoneGate Ink/ StoneHouse Ink, as well as from his own label, Bear Media.

Selena Robins
Samhain author Selena Robins considers herself to be a dragon slayer, chocoholic, loves her family, friends, laughing & writing sassy heroines and caliente hero's. Her published books are as eclectic as her taste in reading, from romantic comedy, paranormal to her work in progress a suspense thriller.

Between the Lines: Interview with John Sandford by Brett King