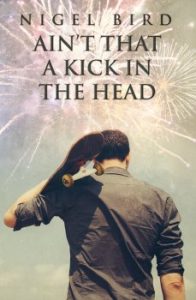 Skates Farrington is a changed man. Gone are the smart suits, the dull meetings, and the extra pounds. Nowadays, he gets his thrills at the skate park and from whatever substances his dealers send his way. The only thing missing from his life is his ex-wife. She’s shacked up with a respectable partner on an isolated farm and striving to create the perfect life. Skates is convinced that she will come back to him when she sees his new self, but when attempts to win her heart all over again are thrown back in his face, he decides a little gentle persuasion is in order. Now he can include murder and abduction among his newfound skills.

DI Oliver Wilson, leading the investigation, has more than a few things on his mind. The case and imminent arrival of his third child should be at the forefront of his thoughts, but the arrival of a sequence of unusual gifts is making him nervous. The packages are sending him a message; he just can’t work out what they’re trying to say.

Nigel Bird recently spent some time with The Big Thrill discussing his latest thriller, AIN’T THAT A KICK IN THE HEAD:

The inspiration for the central villain came from meeting up with a middle-aged friend who was looking after his teenage son’s skateboard. It looked so incongruous that I couldn’t shake the image until I began writing.

The police procedural genre is a mine full of gems that no individual reader could ever empty. I’m sure it’s also full of dross that is best avoided. I’d like to hope that I’m adding a novel that is worth spending time with. As we see the story unfold from the point of view of a number of characters, including the killer, the elements and emotional journeys are complex; the energy ramps up as the various timers tick down to raise engagement and tension; there’s a gentle humor in some of the set pieces; and involvement with the characters, be that the victims, perpetrators, investigators, or witnesses, should make for a gripping read.

As this is the third book in the series, I’m hoping readers will feel they know the central characters a little better. For those who haven’t read books one or two, I hope they feel they’ve been given enough explosive entertainment to cover the cost of entrance.

I don’t find writing a series easy. My organization skills and memory aren’t the best, so there was a lot of checking and cross-checking to make sure I was able to maintain consistency with the first two Rat Pack novels.

The biggest surprise was how well I knew the characters and how much I considered them to be real people. I’ve spent a lot of time in their company now, so by the third book, they felt as three-dimensional and as complex as any of my human friends and acquaintances. In some ways, that helped me with the direction of the book because they took me in the directions I understood they would go. Paradoxically, as with all people, that familiarity also created a conflict that had more gravity than I’m used to. As I pulled one way, they sometimes decided to pull the other, and I can tell you that it wasn’t always me that won.

Nigel Bird is the author of several novels, novellas, and short story collections, including The Shallows, the Southsiders series, In Loco Parentis, and Dirty Old Town.

His work has appeared in a number of prestigious magazines and collections, including two editions of Best of British Crime Stories, The Reader, Crimespree, and Needle.

In addition to writing fiction, he has been a teacher for thirty years and has worked in a number of mainstream and special schools.

He lives on the East Coast of Scotland in Dunbar with his wife and three children.