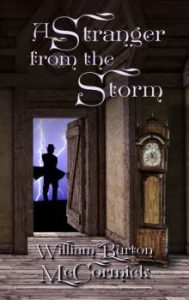 The year is 1900, and the port city of Odessa on the Black Sea is being terrorized by a brutal killer called the Specter. With five people already dead, the murderer promises more. Sisters Tasia and Eleni Karadopoulina feel certain the killer is a scarred, shambling Londoner who took lodging with their family one night during a thunderstorm. Furtive and threatening, Henry Humble stalks Odessa’s labyrinth of interlocking courtyards and foggy docks at night, armed with weapons and skeleton keys.

As the body count rises, so do the questions…most pressingly, who will be the next to die?

William Burton McCormick recently spent some time with The Big Thrill discussing his latest thriller, A STRANGER FROM THE STORM:

There is a subgenre of suspense story I call the “mysterious stranger,” where the plot focuses upon “Is this stranger friend or foe? Am I endangered?” It is a primeval fear of outsiders and unwanted visitors back to the shadowy figure lurking outside primitive man’s cave at night. I think the best stories strike at our instinctual emotions like these, and as an author, I rather wickedly and selfishly enjoy playing with those fears.

Most of the surprises were of the research variety as I learned more and more about my book’s setting: Odessa in 1900. I journeyed to the city several times, through its winding back courtyards, and even took a tour of Odessa’s catacombs, the largest in the world. And I knew I MUST tell a story about those. Also, how much humor one could pack into a suspense thriller surprised me.

Yes, I think the setup of this book is a deliberately stock genre in nature. The mysterious traveler arriving late at night while a killer prowls the countryside. You see it in Alfred Hitchcock’s silent masterpiece The Lodger and Marie Belloc Lowndes’s novel that inspired it. But that brings certain expectations of who is the threat to whom, and without giving anything away, I like to play with those expectations.

I am a classicist by nature. Melville, Steinbeck, Homer, Sophocles, Euripides, Poe, and Le Fanu. I’ve always been a storyteller, but I absolutely succumbed to the writing bug after reading The Maltese Falcon by Dashiell Hammett and The Hound of the Baskervilles by Arthur Conan Doyle back-to-back one summer. There’s considerable Alistair MacLean in some of my writing too. Recently, I’ve become a devotee of early 20th century horror masters M.R. James, Robert Aickman, Bram Stoker, H.P. Lovecraft, and Algernon Blackwood, and you can feel their influence in A STRANGER FROM THE STORM.

William Burton McCormick is a Shamus, Derringer, and Claymore awards finalist whose short fiction has appeared in Ellery Queen’s Mystery Magazine, The Saturday Evening Post, Sherlock Holmes Mystery Magazine, Black Mask, CWA Anthology of Short Stories: Mystery Tour, and elsewhere. He is the author of the historical novel of the Baltic Republics, Lenin’s Harem, as well as the modern thriller KGB Banker (the latter with whistleblower John Christmas). He is a graduate of Brown University, earned an MA in Novel Writing from the University of Manchester, and was elected a Hawthornden Writing Fellow in Scotland in 2013. A world traveler, William has lived in seven countries including Ukraine, the setting of A STRANGER FROM THE STORM. He is enamored with the city of Odessa.