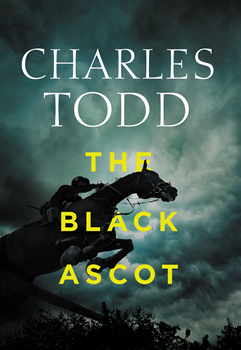 Dynamic mother-and-son team “Charles Todd” are back with the latest installment of their bestselling Ian Rutledge series, THE BLACK ASCOT. The book marks more than twenty novels together and a working relationship that has not only spanned decades, but, according to the team, came out of the blue.

Caroline had dabbled with some writing over the years, but prioritized her family and travel; Charles had a busy career in finance. But they shared a passion for history.

In 1992 they were visiting the King’s Revolutionary War Battlefield in North Carolina, discussing a historical mystery: a man who was supposed to be hundreds of miles away with Cornwallis’s troops, but was killed in that battle.

On the drive back to Charlotte, Charles sat up front with his dad and talked football, while Caroline was in the back seat, ruminating. Suddenly she suggested that she and Charles should write a mystery novel together.

Charles laughed off the idea, but later when his work led to continuous travel and long nights in hotel rooms, he called up his mother and said, “Let’s do it.”

Neither of them had had any real writing training. “Many aspiring authors have great ideas,” Charles says. “Anyone can write the first thirty pages, the first one hundred. Now we tell aspiring authors that if you get to the end of the manuscript, finish the book all the way through, then you’re an author. You’ve learnt something invaluable from that process.”

Charles also learned by going back to the books his father had read to him in his youth: Ivanhoe, Treasure Island, the works of Kipling, the Horatio Hornblower series. “[When we started writing] I had a new appreciation for the main characters, for Jack, Ben, Long John Silver, and how their authors created them,” Charles says.

Though it was an American Revolutionary War battle that inspired them, they ended up choosing to write WWI mysteries set in England. But not London. Rather, the villages around London, the little towns where everyone knows each other, where grudges are meticulously maintained, and class distinctions are sometimes blurred. Mother and son both love England and saw the series as a great way to guarantee that they would have to go to England regularly for their research.

Charles tells the story of one such moment, where visiting a place led them to an understanding they couldn’t have found any other way. He and Caroline were standing in a church tower in an English village and reading the list of the names of the war dead, reading higher and higher until they couldn’t read anymore.

“So many of them had the same last name, so many of them had the same death date. At the Battle of the Somme, 29,000 died. These regiments were made up of recruits from entire villages. So, in one day all the men from an entire village were dead. We found the daily lists of the fallen published in the newspapers. A whole generation of young men dead, and a generation of young women with no one to marry. It’s hard for us today to comprehend the impact of that,” Caroline says.

“At first when we told people we were writing a book about WWI, people would say, ‘No one will be interested in that.’ But we had seen the Imperial War Museum, we visited the towns, we knew it was interesting.”

“WWI was a pivotal event of the twentieth century. It’s where everything that came later began,” Charles says. “Modern warfare was just beginning. We had tanks, airplanes, and machine guns and cannons. But the generals didn’t know how to fight with them. They used the old strategies, lined their men up, and sent them over the hill to get mowed down.”

Their hero, Inspector Ian Rutledge, returns from the war with a severe case of battle shock, now known as post-traumatic stress disorder. “If he had had a physical injury he could not have gone back to Scotland Yard. So we gave him an invisible injury.”

The issue of who Rutledge could talk to was harder to solve. “Post WWI there was such a shortage of manpower, you didn’t have an inspector going out with a sergeant. The inspector went out by himself. So how to describe Rutledge’s thought process in a compelling manner? The more we worked on it, the more it became evident that he would be talking to himself,” says Charles. “We made Hamish [a soldier Rutledge had to execute; Rutledge can still hear his voice in his mind] a manifestation of his PTSD.”

It was important to both of them to depict Rutledge’s PTSD accurately, not to use it as a gimmick. “When I was growing up, it seemed everyone of a certain age was a veteran of WWII. Many of them had shell shock. If we used the PTSD as a gimmick, that would be a disservice to them. We wanted to do it right and with respect. So we did a tremendous amount of research. … Many times veterans will come up to us and tell us we got it right, thank us for writing about it. Those are great moments for us.”

Other writing teams often write two leads, each of them taking the most responsibility for one character or the other. “We couldn’t do that, because we only had Rutledge. So we had to do everything together,” Caroline says. “We are both strong people, and the only way we could write together is if we both knew everything. We had to share every book, every article.”

Although the two of them work closely, they live in different states. They hash things out in long phone conversations and then exchange pages via email. “It took a couple years to arrive at our process,” says Caroline. “I can’t outline. I can’t work with an outline. Charles has had to learn to work with that. We hash out the opening, which sets the stage for everything that was to come, and build the book scene by scene from there.”

Caroline will write a paragraph or two, then Charles will write a couple, and when they are satisfied, those paragraphs go into a master file. They never know how the books are going to end until they reach the finish line. After enough time goes by, it’s hard for them to tell who wrote what.

“Someone once assumed that Charles writes all the battle scenes,” Caroline says. “That offended me. I know my history and my battle strategy. I research the weapons, I handle them. I can write battle scenes. And Charles can sit down and write women characters, just like I can write male characters. Any good writer can do that. If you can’t write about the opposite sex, then you have no business writing.”

When they finished the first book in the series, A Test of Wills, they sent it to an editor friend, Ruth Calvin at St. Martin’s, for her opinion. Calvin quickly offered them a one-book contract, but soon called them back and asked them for more. “We were happy to keep going because it was the only way to find out what happened to Rutledge,” Caroline says.

All the books are written under the pen name Charles Todd, though their marketing makes it clear the books are written by the mother-and-son duo. “Back in 1996 no one wanted to read mysteries written by women, and we wanted a short name for the book spine, so we went with Charles Todd,” Caroline says. Luckily for their readers, she didn’t let the name issue faze her, and the two continued to write together.

THE BLACK ASCOT is the twenty-first installment in the series. It’s 1919, and Rutledge has to solve a cold case that took place at the Black Ascot race (so-called to honor the late king, Edward VII) ten years before. Rutledge is after the suspect Alan Barrington, who has evaded capture all those years. An ex-con tells him that he spotted Barrington back in England, so Rutledge is determined to track him down.

But the investigation puts a strain on his sanity. No one except his sister and his physician know about his shell shock, and he needs to keep it that way in order to keep his job and his new life. The only way to get through it is to find Barrington and bring him to justice. Although the story is set after the war, there are moving portraits of how people are still living with the aftermath, especially one witness who lost his sight in a mustard-gas attack.

In 2009 the duo started another series, a first-person narrative featuring WWI nurse Bess Crawford, “to get a woman’s perspective on the war,” Charles says. They now write two books a year, one for each series.

“We want to know what happens to Rutledge,” Caroline says. “Every time we write another book we are surprised by something new we learn about him.”