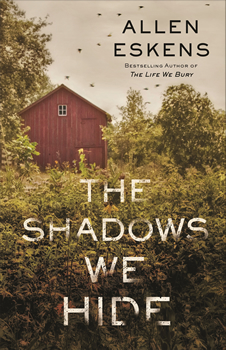 As debuts go, Allen Eskens couldn’t have asked much more of his 2014 success, The Life We Bury. His tale of Joe Talbert, a junior at the University of Minnesota who’s given a biography assignment that leads to the unraveling of a 30-year-old murder, launched a career that has seen Eskens on bestseller lists, receiving awards, and translated into 21 languages. The book is now in development as a feature film as well.

Between then and now there have been three subsequent books that feature homicide detective Max Rupert, but Eskens’s latest release is a sequel to The Life We Bury, titled THE SHADOWS WE HIDE. In it, we’re reunited with Joe Talbert, his brother Jeremy, his mother Kathy, and Lila Nash, Joe’s girlfriend. It’s a welcome return to those characters for readers and for Eskens too.

“I couldn’t wait to return to Joe and the others to tell their continuing story,” he says. “I come to writing as a daydreamer more than anything else, and I have these characters living in my head, so they were growing and changing as time passed between the two books. By the time I sat down to write, the story was itching to get out.”

THE SHADOWS WE HIDE is an excellent, suspenseful mystery that keeps delivering twists right up to the last pages. Interestingly, Eskens didn’t know that there would be a sequel when he wrote The Life We Bury. It’s his approach to developing his characters that made it possible.

“I daydream far ahead in my characters’ lives and do my best to plant important tidbits in my current book that may become important in future novels,” he says. “For example, in The Life We Bury, Joe never met his father. That becomes a driving force for the plot of the sequel.”

A hugely successful first book can carry a daunting weight of expectations for a follow-up, but this wasn’t the case for Eskens. The reason was simple.

“I loved coming back to the characters from The Life We Bury—I missed them. I particularly missed Kathy (Joe’s mother) because I’ve known for years now that her role in the sequel would be pivotal,” he says. “There is one scene in THE SHADOWS WE HIDE that I wrote years before I sat down to write the rest of the novel because I knew that scene would be a tent post for the rest of the book.”

Speaking of tent posts, Eskens is a writer who loves outlining, which he says serves him well in constructing his tightly woven plots.

“Again, here is where my love of daydreaming comes into play,” he says. “That’s when I let my imagination run wild. I believe that outlining lets me make my mistakes in the imagination stage, before I type thousands of words on a dead-end tangent. For that reason, I don’t really ever suffer from plot holes or writer’s block.”

Underpinning this new mystery is a cast of sympathetic characters, many of whom are dealing with the most difficult of real-life issues. Eskens takes an unflinching look at what addiction can do to individuals and families, as well as covers the challenges of living day to day with autism. There is always a risk of sensationalizing such issues, which is definitely not the case with this book. Eskens drew on his past career experience to make sure he portrays those issues in a credible way.

“I believe in the adage of write what you know,” he explains. “I have familiarity with both autism and addiction through my former career as an attorney. In particular, I spent several years as a volunteer in my local Drug Court (which plays a role in THE SHADOWS WE HIDE). In that capacity, I came to better understand the battle people wage against addiction. I saw them up close and got to know their families. Prior to that experience, I viewed people with addiction as though seeing them through my car window as I passed by.”

His previous careers have helped in other ways as well. Eskens has a law degree from Hamline University and practiced criminal law for 25 years. “What law school brought to the table was a sharp focus on analytical skills. I learn best by breaking things down into their finer elements. When I took up creative writing, that discipline came in handy. I wanted to understand the craft of writing from that elemental level.”

He also has a journalism degree from the University of Minnesota. “Journalism school taught me grammar,” Eskens notes. “I was a slacker for most of my life and entered college on a whim. It wasn’t until I entered the journalism program that I saw how deficient my writing skills were. I had to start at a remedial level and catch up with the other students.”

Yet Eskens’s impressive success could in no way be considered overnight. He studied creative writing for 20 years before venturing to publish a novel. He doesn’t regret that it took so long.

“I wasn’t yet ripe,” he says. “The point when I realized that I should pursue publishing was when I was in a class and knew more than the teacher. I figured then that I was ripe.”

Eskens’s legions of readers and fans would concur. They also have a treat coming up with his next release. “This year, 2019, my sixth novel, Nothing More Dangerous, will be published. Over the course of those 20 years of studying, this was the novel that I worked on. I put it aside to write The Life We Bury. Now, it’s ready, and I can’t wait. This book was the reason that I became a writer.”

As for becoming a writer, Eskens has this advice to those who are on the first steps of their writing path: “Learn the craft. There is no other way to become a talented writer. Writing isn’t just telling a story, it’s reaching out and engaging the reader in a way that makes them part of the story. You are artists. Make the reader feel something.”

For Eskens, making the reader feel is what he cherishes the most. “You won’t always hit the mark—but when you do, it’s bliss.”