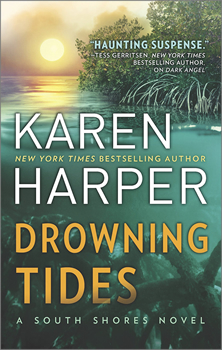 Karen Harper is a New York Times and USA Today bestselling author. Her first book went into print in 1982. She’s been writing non-stop ever since. She’s written 17 stand-alone novels, but what she really likes to do is write series, both contemporary and historical. She writes a book-and-a-half a year, year in, year out.

Harper’s historical novels are all based on real women. Queen Elizabeth I has her own nine-book mystery-solving series. Shakespeare’s mistress has a best-selling book. “Sometimes I pick a British woman who has a wonderful romance in her story. Shakespeare’s Mistress is about a woman with a hard, sad, life. She loved him, but he was married and had children.”

For the Queen Elizabeth series, Elizabeth was the sleuth, but Harper took care to build a strong team of characters around her. “You need a strong cast of surrounding characters. [The team] in Mission Impossible [TV series] was my model. You need a character who does the grunt work, you need a strong man, and so on.”

Her next historical will be out in the fall, and features early screenwriter Elinor Glyn, who helped make Clara Bow a star, and dubbed her “The It Girl.”

Harper travels to the British Isles regularly to research her books, but her Amish series was inspired by the Amish communities in her home state of Ohio. No matter where the inspiration comes from, her series are popular all over the world. To her surprise, the Amish series is really popular in German translation. “My Tudor mysteries are really popular in Russia—though the gowns on those covers make them all look like czarinas.”

Her second New York Times bestseller was a book set in South Florida, where Harper and her husband spend their winters. South Florida is also the setting for her South Shores Series, which started with Chasing Shadows and continues with DROWNING TIDES, out this month, and will continued with Falling Darkness in April. She’s contributed a novel to a two-story collection with Heather Graham, entitled Still Waters.

She’s contracted for six in the series and she’s planning nine books. Each book has a cliffhanger ending that is not resolved until the next book. “A friend told me that if she reads a book with a lack of closure, she throws it across the room. But my readers have not been complaining about the lack of closure, nor have the reviewers.” Harper tried to allay reader suffering by including the opening of the next book, which resolves the cliffhanger and establishes the new mystery.

The sleuth who carries this series structured on cliffhangers is Claire Britten, a forensic psychologist who profiles criminals after the crime. Britten uses her skills on pretty much everyone related to a case. She’s also a single mom, made even more vulnerable because she suffers from narcolepsy. “I wanted to come up with something different from an unreliable character. She’s a single mom, her ex is still in the picture, and she has a serious illness. She has to take meds to sleep and then to wake up. If she doesn’t manage her meds she can have strange hallucinations. I was aiming for a new kind of vulnerable, but readers interpret it as a new kind of unreliable.”

On top of the personal problems and the family issues, there is, of course, a bad guy after Claire. “The first three books hang together. They solve the crime and get rid of the nemesis at the end of the third book. They think they’re safe and can go home. But my readers know it won’t stay like that.”

The series is partly an homage to Charles Dickens’ novel Our Mutual Friend. Harper taught English before she turned to writing full time, and her father was a self-taught Dickens scholar who read Dickens’ books to them.

Harper used to outline but now is more of a pantser. “E.L. Doctorow said it best. ‘Writing is like driving at night in the fog. You can only see as far as your headlights, but you can make the whole trip that way.'”

Harper works hard to satisfy both her historical readers and her readers of contemporary novels. “There is some overlap between them. They all know I won’t give them a real downer of an ending.”

Karen Harper is the New York Times and USA TODAY bestselling author of over 50 novels. Besides suspense, she also writes historical novels about real British women. A former high school and Ohio State University English instructor, Harper and her husband divide their time between South Florida and Central Ohio.