A Thriller Call to Arms 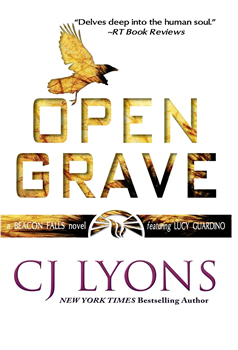 When a long-buried secret bubbles to the surface, a small town must grapple with a 60-year-old mystery.

This is the premise for OPEN GRAVE, the latest Lucy Guardino thriller from New York Times and USA Today bestselling author CJ Lyons. When an antique car is brought to the surface, divers discover more than just a soaked vehicle. They spot a skeleton, and it leads investigator TK O’Connor to crack open a frigid cold case.

The former Marine is eager to take on the investigation, but finds herself stonewalled at every turn upon arriving in the worn out rustbelt town. Who is the man in the car? Why did he die under such mysterious circumstances decades ago?

As if that weren’t enough, rising racial friction and another, unexpected murder combine to leave TK overwhelmed and under a bright, burning spotlight. Enter TK’s boss, Lucy Guardino, who teams up with her to help unravel the aging mystery before it can further affect the present.

Inspired by current events and spinning out of extensive research into the civil rights movement and a “hidden” lynching that took place in rural Pennsylvania 60 years ago, OPEN GRAVE serves as a compelling mystery and a clear call-to-arms for those seeking to end racial violence, and an opportunity to reflect on our nation’s fraught civil rights history.

The Big Thrill spoke to Lyons about her career, OPEN GRAVE and the inspirations behind the book.

What can you tell a new reader about your protagonist, Lucy Guardino?

Lucy is an average Pittsburgh soccer mom juggling the needs of her family with the demands of her career. In the first books, she’s an FBI agent chasing down the worst of the worst. After a career-ending injury she leaves the FBI for a new job as a private consultant for the Beacon Group, which investigates cold cases.

OPEN GRAVE is the third Beacon Falls novel but readers new to Lucy can download a free copy of her first FBI thriller, Snake Skin at my website.

Where do we find her at the beginning of OPEN GRAVE?

Lucy has always been someone who leads from the front, always taking the most difficult tasks on herself.  In OPEN GRAVE, she’s actually away from the main case as the book opens, performing a duty that law enforcement officers hate—notifying the family of a missing boy that his remains have been found.

OPEN GRAVE also features TK O’Connor in a key role – how do these two leads play off each other, and how does their relationship change in the pages of the book?

In many ways, OPEN GRAVE is TK’s book—she has the most emotional growth, coming to grips with her personal heritage growing up with a grandfather who was racist. But that gave me a lot of room to play with, putting Lucy in the role of mentor, something she’s still not comfortable with as she’d much rather be the one “boots on the ground.”

The TK-Lucy dynamic is very interesting, for sure. Now, OPEN GRAVE deals with a cold case, 60 years old, literally rising up again. Did you research any true crime cases to get a sense for how to play this?

Yes, all of my Lucy Guardino Thrillers are inspired by real life cases. I began researching OPEN GRAVE three years ago and at first thought it would center on a controversial officer involved shooting. I’ve visited Quantico several times and worked with their shooting instructors at the famed Hogan’s Alley as well as participating in several urban combat training exercises and firearms-simulation training (the same training police officers go through).

But, by the time I began serious work on the book, the officer-involved shooting became secondary to the real story that I’d stumbled upon: the fact that as late as 1911 there was a lynching in my home state of Pennsylvania.  It was a so-called “spectacle” lynching with thousands of people attending, including several ministers who brought their congregations, picnicking as they watched a man being beaten and burned alive and then waiting for his remains to cool so they could collect souvenirs and have their photos taken in front of them.

This in the heart of the state founded by Quakers!

Every book poses unique challenges for the writer – what was it like to write OPEN GRAVE?

Before I tackled OPEN GRAVE, my most difficult book was my 2015 Thriller Award winner, Hard Fall—the book where Lucy leaves the FBI after unearthing a horrendous pedophile ring. As a former pediatric ER physician, this book was exceptionally hard to write, especially as I refuse to include any scenes of explicit sexual abuse or violence against children. Which meant I had to get into the mind of the victim and allow her to reveal her psychological scars without ever portraying details on page—in the end, that left it to the reader to fill in the blanks, which I think, greatly increased the story’s impact.

With OPEN GRAVE, I faced a different problem—one that I can only hope I conquered! That was how to fairly and adequately portray racism, both past and present, along with the implicit bias we each must learn to overcome. I’m a staunch supporter of police officers and understand the extreme difficulties of their jobs, but I also firmly believe that prejudice exists and we must all address it in an open and honest manner.

TK’s character was my answer. My inspiration for her personal conflict of having a racist grandfather came from a real life photograph I saw and never forgot: a group of VFW veterans, in their dress uniforms and ribbons and medals, men who’d fought and served, risked their lives to protect my liberty, and they were holding a sign that read: Freedom is the Right to Hate.

TK finds her path in the end…hopefully readers will as well. But tackling a subject like that set the bar higher than I’d ever challenged myself before, so I definitely learned a lot about myself.

That’s great perspective, and I’m sure it’ll inform the next book. Can you rattle off some of your writing influences?

I’m a very eclectic reader. Everything from YA to poetry to SF to literary fiction to, of course, nonfiction for my research. My influences range from Ray Bradbury to Mark Helprin to Alice Hoffman to Sarah Addison Allen to Lisa Gardner, David Morrell, Jeffery Deaver, Lee Child, John Hart…okay, basically every thriller writer out there has taught me something!

Hey, we all have to keep learning as we go. Can you talk about your process? Do you outline heavily or write as you go?

I start what can loosely be called research months to years before actual writing—finding interesting tidbits (for the Lucy books, it’s usually fascinating crimes or criminals) then following that trail down the rabbit hole until I “see” how it can work in a story…as for my actual writing, I’m pretty much a seat of the pants writer. I know the emotional arc of the main character, the “why” so to speak, whether it ends on a high note (bad guys put away) or more ironic note (justice served but at a high cost), and then the actual writing is figuring out how that happens.

You’ve written over 30 novels. What keeps you jazzed about a new project? How do you know an idea is going to be central to your next book?

I’m privileged to be at the point where I only write books I’m passionate about. So being jazzed is never a problem—for me the problem lies in how to meet the challenge, to tell the story in the best way possible, setting the bar higher with every story.

As for ideas, I have literally thousands of them in my folders! I rarely start a book without ending it, but do often rethink my original focus as I delve into the character’s emotional arc—some ideas simply generate more conflict than others, plunging characters into that abyss that makes readers desperate to see how they make it out. So I often do change tracks, usually early on once I get a feel for the story—that’s what happened in OPEN GRAVE, in fact.

Speaking of changing, how has the publishing landscape evolved over the last few years from your perspective?

Wow, how much time do you have? [laughs] I was an early adopter of e-publishing and self-published in between my NYC published books, so I’ve had the chance to observe things from all sides of the equation. For me in the last few years the biggest change has been starting my own print imprint, Edgy Reads, and getting my books out in print formats through all the major distributors both here and globally. It’s a lot of work, but my readers asked for print versions and libraries wanted hard cover books, so I consider it an investment that can only serve to increase awareness of my brand as well as gain me new readers while pleasing my current ones.

Thanks for that insight. Do you have any advice for a new writer looking to break in?

Whether you want to break into traditional publishing or begin to self-publish, my advice would be the same: don’t rush it. Too many people finish their first book and think they’re ready for publication. In the vast majority of cases that isn’t true. If you look at traditionally published authors, most didn’t sell until they’d written four or five novels, about the equivalent of half a million words.

If you’re asking a reader or editor to invest their hard won time and money in your book, you owe it to them and yourself to take the time to craft the best novel you can. Make it so good they can’t say no to it! 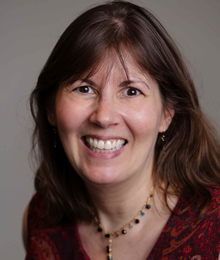 CJ has been called a “master within the genre” (Pittsburgh Magazine) and her work has been praised as “breathtakingly fast-paced” and “riveting” (Publishers Weekly) with “characters with beating hearts and three dimensions” (Newsday).

Learn more about CJ’s Thrillers with Heart on her website.