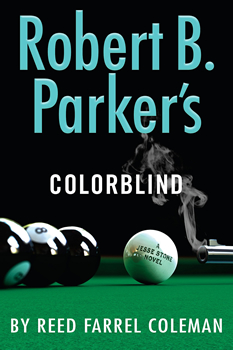 Acclaimed author Reed Farrel Coleman is no stranger to writing a successful series — having left his mark on the private eye genre with the beloved Moe Prager stories and the more recent Gus Murphy novels. He’s also proven incredibly adept at something possibly more challenging — taking on a character created by a legendary author, and adding to its legacy.

Jesse Stone, the troubled former minor league shortstop turned police chief of a small Massachusetts town, was one of Robert B. Parker’s final creations and starred in nine of his novels. Since 2014, Coleman has taken up the mantle, spearheading five new books telling the further adventures of the damaged, conflicted Stone — starting with Robert B. Parker’s Blind Spot.

In his latest, ROBERT B. PARKER’S COLORBLIND, readers find Stone freshly returned from a rehab sting, facing a challenging road to sobriety in the wake of a flurry of racially-motivated crimes in Paradise, MA. Tensions start at a fever pitch with the murder of a local African American woman and grow even more intense when Stone’s newly-hired deputy Alisha — the first black woman on the Paradise force — is pulled into the spotlight by an elaborate frame job.

As Stone struggles with his demons and the growing stakes of the crime wave, he must deal with a mysterious man named Cole Slayton, an embittered youth with a great disdain for authority figures — like Stone. How does the new visitor to Paradise tie into the rash of violent, racial crimes Stone is dealing with? Can he keep it together long enough to find out?

With four novels under his belt, Coleman felt more comfortable tackling topical issues — and bringing them into Stone’s world — to create a wholly new type of Jesse Stone novel that still manages to acknowledge the character’s beginnings.

“ROBERT B. PARKER’S COLORBLIND is by far the most topical Jesse Stone novel I’ve ever done, though it harkens back to a subject Bob Parker touched on in the very first Jesse Stone novel, Night Passage,” Coleman says. “Bob tackled the notion of a police force dealing with a group of vaguely white supremacist militia men in his first Stone and that’s what I’m dealing with in the new one. I directly allude to that original case. It was ugly then and it’s uglier now.

“The strange thing is, readers will suspect this is in some way a reaction to Charlottesville. In fact, I turned the manuscript in a month prior to that event. All this happens while Jesse is still adjusting to his new life without alcohol, without his old friend Tamara Elkin, and with a new troublemaker arrived in town. It’s a lot to cope with and he knows it. The challenge was making the reader see the bad guys as more than just bad and evil. At least they have to be seen as human beings and not monsters. We’ll know how well I did that soon enough.”

There are inherent challenges that come with taking over a beloved and long-running series from the creator, Coleman notes, but he’s also aware that his strengths and skills are different from those of Parker, and the end result will make for a different — and hopefully enjoyable — book, and allow for him to leave his own imprint on Stone.

“Bob and I are different writers,” Coleman says. “I like to say we use the same camera but with different lenses. Bob was more big picture. I’m more of a tight focus guy. So while Bob always mentioned Jesse’s baseball injury, he never really got too deeply into it. My first Jesse Stone, Robert B. Parker’s Blind Spot, is largely focused on how Jesse was injured, how he felt about it, who was to blame for it and so on. It’s the same about Jesse’s battle with alcohol. He was often drinking to excess in Bob’s books. In mine you have more of a feel for why. I think Jesse is Jesse, but the reader knows more about his internal workings in mine than in Bob’s.

“Some readers love that, but many don’t. I was always glad the estate and Putnam gave me some leeway in this area and didn’t try to make me into a clone.”

Differences aside, Coleman still had to get a feel for Stone, his world and the stories left to tell. That wasn’t something that happened overnight.

“I think it took three novels until I felt I’d struck the proper balance between Bob, Jesse, and me,” Coleman says. “Jesse will never feel like just mine. If Jesse ever began to feel too much like mine alone, that’s where I think things would go sideways. In the back of my mind, I always make sure to remember that Bob left me and all his readers a gift in Jesse and he’s not mine to do with as I please. Change focus? Yes. Fundamentally change Jesse’s character? Never. I sometimes revisit the first three novels in the series as they were the grittiest and darkest of the originals.”

Cole Slayton, the mysterious newcomer to Paradise that poses a challenge to Stone, is of vital importance to the book — even if it’s not obvious at first blush.

“Cole is that thorn in the side, pain in the ass guy with a chip on his shoulder the size of a boulder,” Coleman says. “He resents authority, especially in the form of one Jesse Stone. But Jesse sees something of value in the new arrival and bends over backwards to win him over. The thing is, Cole has a secret that has the potential to change Jesse’s life and the remainder of the series. But will he reveal it?”

Of his five additions to the Jesse Stone series, Coleman points to ROBERT B. PARKER’S COLORBLIND as a turning point for his run writing the character — and a sign of what’s to come.

“I’ve written five series—Dylan Klein, Moe Prager, Gulliver Dowd, Gus Murphy, and, of course, Jesse Stone,” Coleman says. “And for me, there always needs to be what I think of as a ‘change’ novel somewhere in a long-running series. A novel where you shake things up, shed some old characters and backstory and revitalize things with new characters and new situations. ROBERT B. PARKER’S COLORBLIND is that ‘change’ novel.”

Alisha, the newest addition to the Paradise police force, is a key character in the new novel — setting off a wave of racial tension that envelops Stone and his colleagues at the worst possible time for the grizzled chief.

“Alisha is the first African American woman hired by the Paradise Police Department. Jesse went out of his way to hire her because he wants his department to begin to reflect the people they police,” Coleman says. “As Boston encroaches on Paradise, it’s becoming a more ethnically diverse place. Alisha is a nod to the future. She’s a native New Yorker whose dad bled, as she says, ‘NYPD blue.’ So she’s the kid of a big city cop in a little town and in the novel she’s beginning to chafe a little bit at being low person on the totem pole. She understandably resents when male white officers step in during certain racially-charged events. She dates a white man, but is also questioning whether or not to take their relationship to the next level. All this leads to a more propulsive plot and one I think readers will enjoy exploring.”

While the character of Stone will forever be linked to his creator, Coleman has nailed down a process for crafting the continuing adventures of the hero — a process that he hopes will continue to open the door to timely, compelling and engrossing stories.

“Although I never feel like Jesse is all mine, I am now very comfortable with the entire process of writing a Jesse Stone novel,” Coleman says. “Bob and I may not write alike, but I have adapted to the form Bob introduced in these novels. I keep the chapters short — three to four pages at most — the dialogue snappy and crisp, and Jesse at center stage. I know the setting, the cast of characters, etc. It’s always the huge advantage of a series. Once you have a plot, it’s off to the races. I’m down to two books a year. Someday, I hope, it will be just one.”