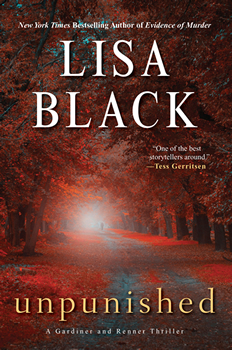 UNPUNISHED is New York Times bestselling author Lisa Black’s second novel in the popular Gardiner and Renner series. In this latest installment, forensic expert Maggie Gardiner investigates an apparent suicide in the newspaper industry. When evidence suggests foul play, Maggie must join forces with vigilante killer and homicide detective Jack Renner in order to catch a murderer. In anticipation of the release of UNPUNISHED, The Big Thrill sat down with Lisa to talk about her latest novel, her background in forensics, and her advice about the craft of storytelling.

This book is really about Maggie coming to terms with what she has done, with what Jack has done, and how she is to move forward in this new reality.

Please tell us a little about Maggie. What events from Maggie’s past have helped make her the woman—and forensic investigator—she is today?

Maggie is a well-rounded and “normal” person, comfortable in her own skin, but a bit of a loner. She lost both her parents while in college but is close to her ever-traveling musician brother. She had a brief, unhappy marriage to a homicide detective but they are on amicable terms, so it seems that all is well. Without the distractions of a personal life she has indulged her workaholic tendencies until her job is everything.

I hope first of all that they will find it a twisty and surprising mystery, that the solution will seem both unexpected and yet completely logical. Beyond that I hope to expound on the problems surrounding the current print news industry. There are both good reasons and not-so-good reasons for this.

See the last question. Seriously, I hope that it’s a well-written mystery thriller that will suck the reader into another world and hold them there. I also think it will present needed context for observations already made, such as why do newspapers keep downsizing or blinking out of existence altogether?

That readership of daily papers has been declining since the forties, long before the internet threatened their prominence. And that some of what you see on TV news isn’t produced by the TV news but by lobbyists and PR firms.

You write multiple series, including the Theresa MacLean mystery series and novels written under the pen name Elizabeth Becka. When writing crime fiction, what themes do you find yourself drawn to again and again?

I like people to have reasons for what they do. Most of everyday crime is mindless: burglars pick houses at random, a guy can’t really explain why he beat his best friend to death during an argument—that’s why I don’t use a lot of real-life examples in my writing. I’m more interested by people on either side of the crime who make a conscious choice, and their reasoning behind that choice. Why? is always the most difficult question to answer.

You have an interesting background, including a career as a forensic scientist. Very helpful for a thriller writer! How did you become involved in forensic science, and how has your day job impacted your writing career?

I was a writer first—since, oh, about age ten, but after watching endless cop shows with my father I wanted to be a detective. Fortunately I also recognized that I did not want to be a cop, so I went into forensics. The day job helps the writing job quite a bit—no surprise—with the details but not usually with the plot, as most of the crime I deal with is tedious and routine. But I think that, over many years, I’ve gained a familiarity with how the system of law works, the limitations of crime and punishment, the difficulties of ever getting a handle on human tendencies.

Tess Gerritsen called you “Quite simply, one of the best storytellers around.” Incredible praise from another master storyteller. If you could pass along one piece of advice about the craft of storytelling to aspiring authors, what would that be?

What authors or books have influenced your career, and why?

Alastair MacLean, I believe, taught me the required elements of a thriller: action, surprise, and characters who are strong but human. Tami Hoag taught me the characteristics of a good character. And Ellery Queen taught me that every detail has to count.

I’m obsessed by word count, so I have a daily number I have to hit (unless some major upset to the day intervenes.) It’s stupid, but it has worked for me. I like to get it done first thing so I can relax for the rest of the day. Since I started out writing at work [she says, lowering her voice to a whisper] I’m not fussy about where I write. I volunteer for a hospice program doing caregiver respite so I can write for hours on a laptop perched on my knees while next to a sleeping patient. I can more or less work anywhere but quieter is better.

What do you enjoy doing when not working or writing?

Traveling. This is pretty much my only goal, to go everywhere and see everything. I’ve also recently taken up the violin. I sound like a cat that is strangling.

I am about to start the fourth book in the Gardiner/Renner series. (The third is with my editor now.) I have the setting, and the why, but that’s about it so I’m not really ready…but then, I’m never ready. I just know it’s time to start. 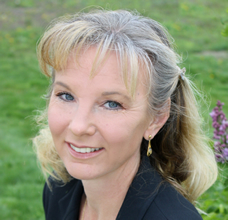 Lisa Black has spent over 20 years in forensic science, first at the coroner’s office in Cleveland Ohio and now as a certified latent print examiner and CSI at a Florida police dept. Her books have been translated into 6 languages, one reached the New York Times Bestseller’s List and one has been optioned for film and a possible TV series.