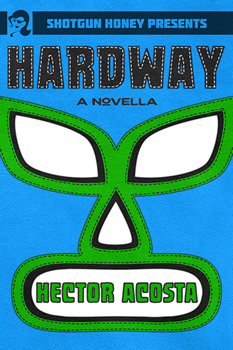 Hector Acosta was born in Mexico City and moved to the United States. He spent time in El Paso and Dallas before moving with his understanding wife and dog to New York. His time living on the border left an impression on him, and much of his writing revolves around that area and its people. In his free time he enjoys watching wrestling and satisfying a crippling Lego addiction.

Hector Acosta is a spinner of tales that will take your breath. His short stories have appeared in Weird Noir, Thuglit, and in three volumes of Shotgun Honey Anthologies.

HARDWAY is the story of fifteen-year old Spencer who loves professional wrestling. He and his brother Billy start their own wrestling promotion operation in their Dallas apartment complex. Soon after a rival promotion outfit run by Eddie Tornado opens in a nearby apartment complex. Eddie is an unhinged teenager with a connection to Billy’s girlfriend, and an axe to grind. The feud between teenagers heats up and Spencer finds the world of professional wrestling is more real and dangerous than depicted on television.

It happened during my first year of college while taking an English class. One of the first assignments was to write a personal essay about an unusually strong memory. I wrote about the time my dad took my brother and I across the U.S border into Mexico to see a lucha show. Lucha is the Spanish word for fight. Lucha libre shows are underground wrestling entertainment events.

I thought my first essay was decent, and the teacher apparently thought so too, because a few days after I submitted it, she took me aside and asked me if it could be reprinted in the college newspaper. She was the editor.

I should have said yes. And I did, kinda. I asked her if I could work on the essay a bit more before she ran it. She agreed and gave me a timeline, which I promptly blew. Like I said, I thought that the essay was decent, but I didn’t think it was great, and I was sure if I just kept working at it, it would get to that point. So every time my teacher asked about the essay and reminded me there were deadlines, I would promise I’d turn it in next time I saw her. I never did, and after a while she stopped asking.

This event ended up influencing my writing in two very specific ways. The first is the most obvious, and probably one every creative person stumbles upon at some point or another. At some point you just have to stop working on the thing and let it out into the public. Secondly, while the essay never was published, it helped me to home in on the things I enjoyed writing. It’s funny, because the essay shares a lot of common themes with HARDWAY.

Tell us about your novella HARDWAY.

The plot of HARDWAY came about when I asked myself the same question I always do when I sit down to write: “How can I insert wrestling into this?”

I’m joking, but just barely. HARDWAY is the story of Spencer and Billy, two Dallas teens with a love of professional wrestling and too much time on their hands. It’s about stupid teens doing stupid things for stupid reasons. HARDWAY involves drug deals, violence, a very stressful arcade fighting game moment, and wrestling references. Lots and lots of wrestling references.

It also started as something I cooked up for the website Litreactor and a crime writing contest they ran a couple of years back. The original draft was a short story of about five thousand words or so. After finishing it, it turned out I couldn’t get the characters out of my head. I was never quite satisfied with the ending of the short story, so I decided to try to lengthen it and give the whole thing more breathing room. I think it worked.

Do any of the characters in HARDWAY resemble real people you have known?

There is a lot of me in Spencer, the overweight, shy, nerd who loves making up stories and pines for his older brother’s girlfriend. Crime writing is full of characters that could charitably be described as screw-ups, but a lot of times they still are cool guys and gals. They’re quick witted, or brave, or conniving enough to win fights. I wanted to find out what would happen if someone like me was thrown into a crime caper gone wrong, and I figured writing it would be the easiest (and most legal) way to find out.

What authors have influenced your writing style?

Sam Hawken is a great writer. I first stumbled across his work because his earlier writing revolved around the U.S/Mexico border. He’s expanded his work since then, and his latest work, featuring Camaro Espinoza, is some good stuff.  His style is mean and lean; he doesn’t waste words. Something I still do.

Another vastly underrated writer in my eyes is Gabino Iglesias. He possibly wrote my favorite novel of 2016, Zero Saints. He also writes about the border and the men and woman mired in it. My favorite thing about his writing is how confident it is. His story goes into some far out places, but he never loses the reader. And his confidence also stems from the way he uses Spanish and other languages in his writing. He doesn’t hold the reader’s hands. Instead he trusts they will be able to decipher the words and their meaning from the context alone.

Johnny Shaw is also another writer I admire due to the way he deftly handles humor, violence, and out-there action. His novel, Big Maria has moments in it which made me smile, laugh, and tear up, sometimes only a couple of pages apart.

How important is a writing routine? What is yours?

For me a writing routine is incredibly important. I’ve found that output-wise, I’m most successful when I have a set routine and don’t deviate from it. I tend to write in the afternoon/evening. I get home from work. I set aside time to do some light chores, cook dinner and give myself 15-20 minutes to relax by either checking Twitter or playing a quick videogame. Then I try to write for two hours straight.

I’m working on a couple of things right now. The first is another novella that I’m going through and editing with an eye to submitting it at the beginning of the year. This novella involves a town that rose up around a smelting factory around the 1940s, and the turmoil it goes through when a girl’s dead body is found there.

I’m also working on a novel set in the 1990s, featuring another set of kids who step across the border into Juarez, Mexico, and their struggle to survive the night.

And finally, I’m working on a Thursday Malone story, which is closer to a straight detective story.

What are some of your favorite places to write?

I’ve always envied people that can write anywhere. For me, I have to be at home sitting at my desk. I can write in other places, but it never comes out as easily as it does if I’m at my own desk with my Lego Firefly build nearby. 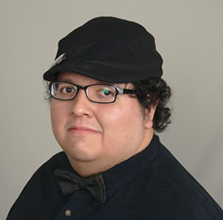 Hector Acosta’s short stories have appeared in Weird Noir, Thuglit, and all three volumes of Shotgun Honey Anthologies. Hardway is his first novella. He lives in New York with his wife and dog, and is working on his next book. He’s 99% sure wrestling is scripted, and can be followed on Twitter @hexican.