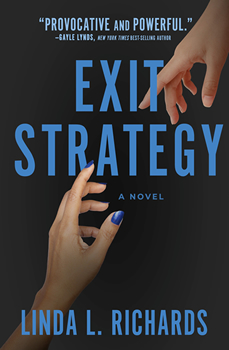 High tech and high finance meet the nameless hit woman from Linda L. Richards’ first novel, Endings. In the follow-up novel, EXIT STRATEGY, the assignment is to protect someone instead of end someone. But being a hired killer has taken its toll, though not as much as losing her entire family did before she made the abrupt career change.

In EXIT STRATEGY, she’s tasked with keeping the beautiful CTO of a unicorn company alive. It seems her job will soon drag her back into the murky waters of murder when she has to kill to protect the person who has invented a technology that will change the world.

In this interview with The Big Thrill, Richards provides further insight into her latest release, provides tips for new writers, and shares a little about what she’s working on next.

On the one hand, it feels arrogant of me to even presume to make a contribution, if you follow. Who am I?

On the other, I think there is a move to a more cerebral thriller, and EXIT STRATEGY would be part of that movement. The protagonist continues to be a cypher, but she is also very internal: She has a rich inner life.

And then, of course, she is a contract killer—a hitwoman—but she has been struggling with that—morally—since the beginning. That said, very little about these books is about the business of being a hit person. In some ways, they are about her struggle for the light. How do you come back from such a bad place? How do you redeem yourself? Can you? That is never the discussion, but it is unsaid and everywhere, I think, in the Endings series.

Was there anything new you discovered, or that surprised you, as you wrote this novel?

I was surprised to learn as much as I did about her family this time. I didn’t see it coming and, in a way, it explained so much.

Seriously, though: I do very little plotting in advance on the first draft. My process is much like watching a movie—it just seems to unroll. I’m always anxious to see how it turns out! Viewed in that light, everything is a surprise to me.

What can you tell us about your book that we won’t find in the jacket copy or PR material? No spoilers please.

What didn’t make it into the jacket copy is that a big subplot of this novel is green tech and finance at a high level: what that looks like from the back end. I don’t think that makes for sexy jacket copy, but it’s fascinating stuff.

There is a world-changing technology in the book, and it’s almost a subplot. I had so much fun making up that tech in part, I think, because I wish it existed. The unicorn company at the heart of EXIT STRATEGY is trying to bring to market a technology that turns household garbage into household energy. Imagine! I so wish it was a thing. I hope someone is working on it right now.

I really could make the list so much longer. And I know I could keep juggling this list, so I’ll stop now. It’s a good list.

I understand you have some exciting news regarding Endings. Please share that with us.

Endings was recently optioned by a major studio for series production. More recently still: I know that a writer has now been signed. I know who it is, and I’m over the moon: She’s fantastic. And my agent has forbidden me from saying anything more, but I understand an official announcement is being crafted now. Keep things crossed.

A few years ago, I started working entirely in longhand. At the time (the five years before COVID) I was living in three places: Vancouver, Canada; the Central Coast of California; and Phoenix, Arizona. It meant I was on the move all the time, and I was often on a plane, often short hops.

I started writing in longhand because they don’t make you turn your notebook off when you’re taking off or landing. While doing that, I discovered a new and (for me) exciting connection with the material. I found I could drop myself into the story more easily and effectively and even sometimes get to places in a story that had been unreachable before. Honestly, it just feels like magic.

These days all of my first drafts are in longhand. First thing most mornings, I transcribe what I wrote the day before. As a result, my first draft essentially becomes my second draft, because I’m editing and rewriting as I transcribe.

After I’ve transcribed, I go out into the world and write more stuff in my notebook. My patio. Cafes. Happy hours. Lately my tennis club. Planes and airports if I’m going places. I can write anywhere and anytime. As long as it is longhand.

Do you outline before you write?

No outlining at all. I’ll have some big arc in my mind, and I’ll just begin. Most of the time, the arc changes on the journey, and that’s always a fun surprise.

Do you have a favorite place, music, view?

I don’t know why, but none of that matters to me. I’m very deeply in my own head a lot of the time, and certainly when I’m writing.

Any tips for upcoming authors?

Write the book that’s in your heart. Don’t worry about what the market wants right now. By the time you get there, it will be something else anyway.

And write the best book you can. I’m fairly certain that, on their deathbed, no one ever said: “I shouldn’t have written that novel as well as I did. I should have spent less time on it. Given it less heart.”

It’s a very competitive market out there. I don’t think there’s ever been a place for crappy books, but there’s even less of a place for them now. Give it everything you’ve got. Make it hurt if you can—feel it! There’s no guarantee you’ll ever sell it and get an agent, but your chances will be better if you are submitting a book that is simply the best it can be. And you’ll feel better about it, too.

What’s next for you? Any more novels or series on the horizon?

I’m always working on something I’m excited about. And I feel very lucky: I’m in a place in my career where people (agents, editors, etc.) are looking forward to the next thing from me. I am filled with gratitude.

I’m also feeling lucky because next year, I have works of fiction and non-fiction coming out that both feature wild horses in America. Dead West is the third book in the Endings series, and it will be published around this time in 2023. The non-fiction book (still untitled) is being published by Orca Book Publishers, and it’s for kids nine to 13 years old, in the same vein as my 2020 book, Return from Extinction: The Triumph of the Elephant Seals. It’s being published fall 2023. Imagine! Maybe next year you’ll be asking me horsey questions.

Linda L. Richards is a journalist and the author of 15 books, including three series of novels featuring strong female protagonists. She is the former publisher of Self-Counsel Press and the founder and publisher of January Magazine. Her short story “Terminal City” appeared in Vancouver Noir (Akashic Books) and was awarded the Arthur Ellis Award for Best Short Story in 2019. She divides her time between Vancouver, Canada; Phoenix, Arizona; and Paso Robles, California.