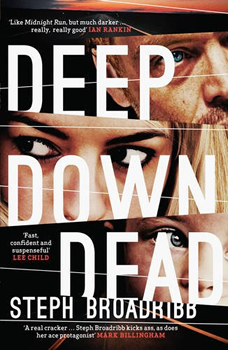 Ah, Steph Broadribb. Unless you’ve been living under a rock for the last few years, you will surely have come across the phenomenon that is Crime Thriller Girl. Blogger, interviewer, and international crime festival-goer–she’s now gone and written a book…and what a book it is! DEEP DOWN DEAD is the first in the series, featuring the bad-ass sparkly-heeled bounty hunter Lori Anderson and her smoldering love interest, JT. I loved this book. I think you will, too.

When I decided to write a book with a female bounty hunter as the main character, I felt that if it was going to be authentic, I needed to find out what the job is actually like, especially for a woman in that world. I’d already done some research into bounty hunting and had made contact with a bounty hunter in California who trains people and runs his own bail bond and bounty hunting business. So I asked if I could come out and train with him. Luckily he said yes, so I flew out to California and learnt all about bounty hunting–how to track a fugitive, methods of restraint and defense, the legal system, and the business side of the job. I got to meet a great bunch of people and find out what the reality of making your living from being a bounty hunter is like for men and women.

I actually wasn’t! It doesn’t look fun though, so I reckon I’ll try and avoid getting tasered for as long as I can!

I reckon avoiding getting tasered is good life advice for all of us. Next up: Lori. She’s you, isn’t she? I mean, she’s blonde and sexy and she’s got your sparkly heels.

Ha, ha! Well, she comes from me, so I guess there’s some of me in her. I’ve got the blonde hair and I wear the heels and the cowboy boots, but I’d say she’s a sassier, more kick-ass version of me!

Right. So she’s definitely you. And JT? Who is he, exactly? In your head? When I first read the book I thought he was Hugh Jackman, but now I’m thinking he might be a Thelma and Louise-style Brad Pitt?

He could be an aged Thelma and Louise-style Brad Pitt for sure. When I was writing , I had an image of Robert Redford in his mid-forties in my mind. If we’re talking dream casting, I reckon Brad would be very cool. Also Charlie Hunnam, Josh Holloway, or Michael Fassbender.

All excellent choices. OK, some more serious stuff now. Tell us what led you to write this book. It’s not the first thing you’ve written, is it?

I’ve had a go at a few “practice” novels that will never see the light of day, but this is my first published book. I’m a huge fan of the action thriller genre and so I knew I wanted to write an action thriller and I wanted to have a female lead. It was really important to me that the protagonist was independent and solved her own problems, but had vulnerabilities too. From that idea, Lori Anderson began to take shape.

And how does it feel now that people are reading the book? It’s caused quite a splash already, seeing as it’s grabbed the attention of three very big hitters (Lee Child, Ian Rankin, and Mark Billingham).

It’s kind of strange that the characters and story that have been in my head for so long are now out there in the world! But I’ve been totally overwhelmed and humbled by the response to the book so far. Having Lee, Ian, and Mark’s quotes on the cover is still incredibly surreal. I’ve been reading them and loving their books for so long, and to have my writing heroes read my book, let alone quote for it, has been a totally mind-blowing experience!

I’ll bet! So what are you working on now? Are we going to see more of Lori and JT? Are they going to settle down somewhere and set up a ranch or something?

I’m working on the second book in the Lori Anderson series, Deep Blue Trouble, at the moment, which picks up a couple of weeks after the end of DEEP DOWN DEAD. So yes, there will be more of Lori and JT, although I can’t see them settling down someplace anytime soon. Wherever Lori goes, trouble is usually close behind!

Trouble. Yes. (Definitely you.) You must be gearing up for some publicity events this year… Anything we should know about? What about those ‘Slice Girls’ we keep hearing about? *cough*

I am indeed! I’ll be getting about in the U.K. during the first part of the year, and then over in the U.S. and Canada in the later part of 2017 (dates will be on my website www.crimethrillergirl.com very soon). And I’ll definitely be joining up with my Slice Girl sisters–your good self, AK Benedict, Alexandra Sokoloff, and Louise Voss–to shake our thing at the festivals again this year. Can’t wait to put on my corset and heels again!

Which reminds me, I need to get myself a new corset too. Thanks, Steph. I know this book is going to do brilliantly, and I hope to hear news of a Hollywood deal very soon. In the meantime, what’s the one piece of advice you’d give to anyone starting out on their writing journey?

Thank you! And thanks for a very fun time being interviewed!

In terms of writing tips, I’d say the main thing is to read a lot, and read widely. You can learn so much about writing from reading–what works, what doesn’t work so well, how to create suspense, different narrative styles and ways of telling a story.

Steph Broadribb is an alumni of the MA in Creative Writing (Crime Fiction) at City University London, and trained as a bounty hunter in California. As her alter ego—Crime Thriller Girl—she indulges her love of all things crime fiction by blogging at www.crimethrillergirl.com. Most of her working life has been spent between the UK and USA. She currently lives in Buckinghamshire, England surrounded by horses, cows, and chickens. DEEP DOWN DEAD is her debut novel.

S.J.I. (Susi) Holliday grew up in a small town in Scotland. She spent many years working in her family’s newsagent and pub before escaping to St Andrews, Dundee, and Edinburgh to study microbiology and statistics. She has worked as a statistician in the pharmaceutical industry for over sixteen years, but it was on a six-month round-the-world-trip that she took with her husband in 2006 that she rediscovered her passion for writing. After abandoning her first attempt at a paranormal thriller, she wrote hundreds of crime and horror short stories before finally sitting down to write the book she was always meant to write. Based on a true-life creepy event, BLACK WOOD is the first of a loosely-linked series set in the fictional town of Banktoun, followed by WILLOW WALK, and THE DAMSELFLY. She lives in London, except with the magnetic pull of Scotland attracts her back, and she can usually be found in cafes, pubs, hanging around at book festivals and on Facebook and Twitter (@SJIHolliday).