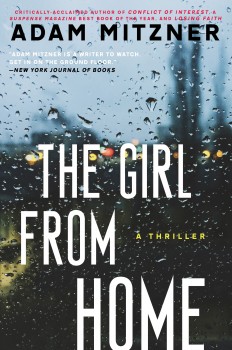 “It’s about people who feel they consciously have to redeem themselves.” That’s how Adam Mitzner describes his fourth book, THE GIRL FROM HOME: A THRILLER. Although the word “thriller” is part of the title, THE GIRL FROM HOME is really a novel of psychological suspense. It asks if redemption is possible, and if so, what are the steps to getting there?

His hero, Jonathan Caine, has it all: the condo with a fabulous view in Manhattan; the summer house in the Hamptons; the young, lovely trophy wife.  But Jonathan is a currency wizard who hits a spot of trouble, pulls a sleight of hand to get out of it, has to keep pulling more and more to stay ahead of it, until finally he pulls one sleight of hand too many.

Jonathan loses nearly everything. During the twilight period where he waits to see if he will also lose his freedom, he takes his first baby steps toward redemption. Can he correct any of his mistakes? Not really. Can he start over now and try to be a better person? Well, maybe. At least until he goes to jail.

Being a better person involves tending to his dying father. It also involves trading in the acquisition marriage for true love with Jacqueline Williams, the prom queen his senior year in high school. Back then she didn’t even know he existed. Now she’s impressed with his wealth and power, or at least, the appearances of it that Jonathan manages to maintain.

Jacqueline is in need of redemption too. For her own sake, for that of her children, and for the sake of true love, she needs to get away from her abusive husband. She needs to love Jonathan the way he really is. And both of them need to learn to trust each other.

Is redemption even possible when murder is involved?

Mitzner’s first three novels have lawyers as protagonists (one of these appears in this book as a supporting character), but GIRL FROM HOME stars a hedge fund manager.

“It always interested me, the life that [financiers] lead. It is a rarified kind of existence. And I was ready to write a character who wasn’t a lawyer like myself. The story could have worked with any profession, any very successful person, but I’ve represented a few hedge fund managers so it felt like a good fit.”

Jonathan’s story is told in the present, with the hedge fund’s collapse in flashbacks, an appropriate format given that Jonathan is almost a completely different person in each timeline.

Mitzner writes the way he reads: he starts off with a story question, such as the issue of redemption or “how far would you go to protect the people you love?” (the question for his novel Losing Faith.) He begins writing with no outline, only a general idea of what the story is about. The story reveals itself to him chapter by chapter, just as it would to a reader.

Once he has a draft he has to go back and make sure thinks are consistent and puts clues in. He has no real outline at the beginning, but sometimes will outline before revising.

Because he is also a husband, father of two daughters and two stepsons, and a busy litigation lawyer, he does most of his writing on weekends. He edits during the week after he comes home from work. At that rate he writes about twenty pages a week. Each book takes a year-and-a-half to two years.

His next book will take him even further out of his comfort zone: it’s about two sisters, one, a policewoman, the other, a novelist who goes missing right after handing in her novel. The manuscript is the only clue the policewoman has to figure out her sister’s life and solve the crime.

THE GIRL FROM HOME is about what people who put themselves on trial, judge themselves, and free themselves—but only after all debts have been paid.

The new novel weighs the value of using an artistic text as evidence for a crime, something Mitzner did once before, in his second book, A Case of Redemption. A rapper is on trial for murder, and most of the evidence against him are the lyrics to his own rap songs.

The new book is a departure for Mitzner, as for the first time he has two female lead characters.

“I was inspired by listening to my two daughters,” says Mitzner. “I tried to project what they would be like when they grow up.” 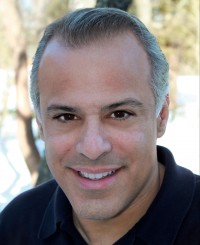 Adam Mitzner, a lawyer by day, is the author of Losing Faith, A Case of Redemption, and A Conflict of Interest. He lives in New York City with his wife and children.