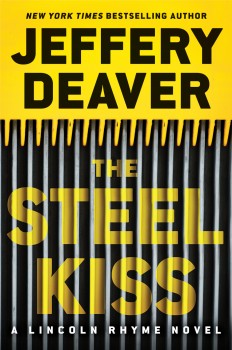 The heart of every thriller fan speeds up a bit when they hear there’s a new Lincoln Rhyme novel coming out. Jeffery Deaver’s latest in the series, THE STEEL KISS will not disappoint his fans. In this one, Rhyme comes up against one of his most formidable enemies yet: a brilliant murderer who turns common products into weapons.

Quadriplegic forensic detective Lincoln Rhyme is the kind of character readers love to try to figure out. He’s a scientist: cold, dispassionate and given to the immutable laws of the physical world.

“He would never see himself as a hero,” Deaver says. “In fact, he doesn’t think about himself much at all. He looks at his quadriplegic condition, if at all, as an occasional inconvenience and has no time for the frivolities and distractions of modern life, as he focuses on the task at hand—solving a crime. If he’s like anyone, he’s the positive side of Walter White, the central figure in Breaking Bad, and, of course, Sherlock Holmes.”

To most fans it’s Rhyme’s series, but THE STEEL KISS opens with Amelia Sachs hot on the trail of a killer, trailing him through a department store in Brooklyn. An escalator malfunctions, the stairs give way and an innocent bystander is horribly mangled by the gears. Sachs is forced to stop and save the victim, letting her target escape. The fact that she drives the opening sequence in the book reflects Sachs’ growing role in the series. In fact, Deaver says it was his goal to make Rhyme and Sachs equals from the beginning.

“I loved the idea of making her the uncompromising action hero, and him the thoughtful one,” Deaver says. “She represented the intuitive side of policing while he was the cold rationalist. That was always an interesting mash-up of personality types for me.”

In that opening sequence, Sachs and Rhyme soon learn that the escalator problem was no accident, but the first in a series of homicidal attacks executed by another great Deaver villain. Vernon is a brilliant craftsman who manages to turn products we all buy into weapons.

“He’s thoughtful, obsessed with his craft, devoted to family… and chillingly ruthless.” Deaver says. “He’s also emotionally fragile, really a heartbreaking character. I’ve always felt that we must feel something for all the people in our books, even the bad guys.”

Deaver is incredibly prolific (30 bestseller since 1988) thanks to an interesting combination of originality and consistency. He has no problem saying that he writes his novels to a formula with specific elements: a fast-paced thriller with lots of internal plot reversals, esoterica about a specific topic and three or four surprise endings.

“I do this because readers seem to like those attributes,” Deaver says. “The difference from book to book comes in a choosing a new theme, like data-mining in The Broken Window, and governments’ assassinating their own citizens in The Kill Room. THE STEEL KISS looks at rampant consumerism and manufacturers’ responsibility to protect the public from dangerous products.”

Deaver also adds different kinds of personal conflict in every book. For example, in this book Sachs’ former boyfriend appears, threatening her relationship with Rhyme.

But there are many comforting constants in the series. Lincoln Rhyme will be obsessively and impatiently coaxing the truth out of physical evidence. And Sachs will be pushing her muscle car to the limits and drawing her Glock whenever needed to nail the bad guys.

So if you’re looking for a pedal-to-the-floor thriller with reversals and twists, this is the novel for you. But beware! After reading THE STEEL KISS you may never want to use your microwave or get on an escalator again. 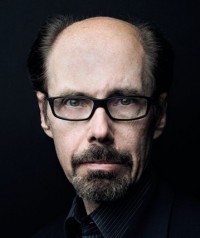 A former journalist, folksinger and attorney, Jeffery Deaver is an international number-one bestselling author. His novels have appeared on bestseller lists around the world, including the New York Times, the Times of London, Italy’s Corriere della Sera, the Sydney Morning Herald and the Los Angeles Times. His books are sold in 150 countries and have been translated into over twenty-five languages.