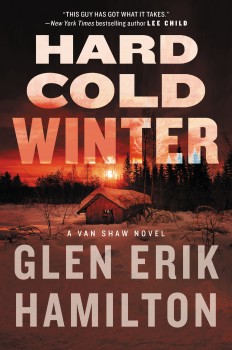 A climb in the Olympic Mountain is just the first challenge for the hero of Glen Erik Hamilton’s new thriller, HARD COLD WINTER. Van Shaw’s search for a missing girl leads to the scene of a brutal murder and forces the ex-Army Ranger to delve into corners of his own criminal past.

Dead bodies are found, including a member of one of Seattle’s most prominent families. Soon more dangers arise. Then a fellow Ranger from Afghanistan turns up at Van’s doorstep, seeking support.

While Van struggles with PTSD symptoms, his investigation leads him into a struggle that includes a billionaire businessman, vicious gangsters, and a betrayal that forces him to seek help from a surprising source.

HARD COLD WINTER blends suspense and tension, with a mystery at its heart.

Hamilton recently answered a few questions for The Big Thrill about his new book.

In HARD COLD WINTER, Shaw is faced with another action-packed mystery. Tell us a little about the puzzle-to-thrills ratio you strive for.

I love action scenes—both reading them and writing them—but there’s nothing quite as compelling as an unsolved problem that torments the hero, and by extension, the reader. Learning “whodunit” is an almost primal urge. If there’s a murderer lurking about the village, can we rest until we know which of our tribe can’t be trusted? That’s the urgency that drives Van, a fellow with more than a few secrets himself, to go where he’s not wanted and demand answers from rough people. Which of course leads to more action. Win-win.

As a Seattle native, tell us about the Olympic Mountains as a backdrop for part of this story. What inspired that?

After setting a lot of my first novel in the city, I wanted to go further afield in the opening chapters of HARD COLD WINTER. Since some of the backstory would involve Van’s combat experiences with the Rangers in Afghanistan, the idea of contrasting the terrain of both mountain ranges was appealing. Plus, it gave me an excuse to hike around on the peninsula for a day or two and call it research.   Never underestimate the lure of location scouting in fun new places.

Your hero faces an array of bad guys, and his journey takes him to mean streets and entangles him with people of power and influence as well. Tell us a little about the blend of villains in HARD COLD WINTER.

Lawyers, guns, and money. Like Warren Zevon implied, those are all powerful weapons.   One of the characters in HARD COLD WINTER is, according to news reports, estimated to be the 13th-richest man in Seattle. He may or may not be evil, but he’s certainly not shy about using his wealth to get whatever he wants, shielded from consequences by his legal advisers and lackeys. By contrast, the gangsters are almost more honest, if you can apply that term to people who will happily put you in the morgue for crossing them. But even the thugs have different strata. One of the fun parts of writing about criminals is exploring the difference between bad guys and really bad guys, and how those characters navigate the waters when things get stormy.

What direction did your research take in preparing for this novel? Were there specific points you had to drill down on?

Van has wrestled with PTSD in the past, and the strain and grief of the action in HARD COLD WINTER gives new life to some of his old symptoms. His friend and fellow Army Ranger, Leo Pak has his own struggles. Leo’s pain is more raw.   I wanted the two men to talk to each other about those experiences, as soldiers would. I also wanted to be especially careful not to exploit the real and often overwhelming impact of PTSD on our veterans.

So, I did my homework. In addition to a lot of reading on the subject, including David Finkel’s excellent Thank You For Your Service, I talked to Army vets and former Rangers about their own tours, how they thought about combat stress while active, and how that has changed (or not) since they’ve become civilians. Some of those soldiers were very open and honest about their issues and frustrations, and I owe them a great deal. There are no pat answers. As I mention in the book, there may be dozens of options for medical or psychological help, but navigating the system can be overwhelming. Some make it through and find what they need. Others don’t, or can’t.

Were there other themes in the back of your mind as you crafted the tale?

Themes are something that take shape sometime during my second draft, I’ve discovered. I apparently have to write the book before I know what it’s really about. My first book, Past Crimes, was about forgiveness, for yourself and for others. HARD COLD WINTER, I realized, is about trust. Who’s worthy of it, what kind of risks we take when we trust someone, and maybe more to the point, what we stand to lose when we can’t bring ourselves to open up.

How important do you feel it is to read mysteries and thrillers as you chart your own course?

It’s very important, but you have to balance being aware of trends with chasing those trends. Every author might like to have the sales of a Gone Girl or a Girl with the Dragon Tattoo. We shouldn’t all be writing thrillers about domestic sociopaths or Swedish hackers. Reading is the most important thing for writers, and especially newer writers, no question about it. I have an endlessly-growing stack by my bedside, most accumulated at mystery conventions and my own book tours. On a good day I sell more books than I buy.

You’ve spoken of balancing writing with a corporate job. Has the intensity lessened any? What’s your writing schedule like these days?

I’d love to tell you that both the schedule and the writing itself have gotten easier, but it’s just not the truth. What has improved a little is my discipline. I was never lacking in stubbornness, but the challenge of writing the second book to deadline while launching the first book required a whole new level of dedication. Happily, my second book launch and third book deadline are staggered to avoid any collisions.

On an ideal regular week, I’ll write two nights during the work week, and a full day on the weekend. If I have a looming deadline, it might be every night. I plan to experiment with my next book by writing every morning before work, but the night owl approach has worked well thus far.

Does a writing group or circle of friends still serve you in your creative process?

Very much so—I belong to a weekly group taught by mystery author Jerrilyn Farmer. All the members are skilled writers themselves. It raises our game. Having the input of beta readers who know my work, and my weak spots, is invaluable. When asked what advice I have for aspiring authors, I always recommend joining or forming a group of like-minded, serious writers. An added bonus is having a deadline to hit every week. It keeps you focused.

These days, some authors decide they have a fixed number of stories to tell about recurring characters. Do you think Van has a fixed arc, a set number of books, or do you see his adventures spanning many novels like Travis McGee or Jack Reacher?

The eventual number of Shaw books is very open to me. There’s an arc of the character that’s developed in the first three books, with the third in progress now, that I find very satisfying. But I can also imagine some fun new directions for Van and the the characters around him.

What I’m not interested in is dogma: having the lead character stay essentially unchanged for many many books. That approach can make for happy readers —I’ve enjoyed quite a few series where the last book was very similar to the first, with two or three dozen novels in between—but I’d go nuts as a writer if Van remained in his late twenties forever.

Above all, it’s about staying as jazzed to write the next book as I was for my first.   I think that excitement translates to the page, and I hope readers are just as happy to see Van grow as a person. Assuming he survives long enough for that to happen. He does attract trouble… 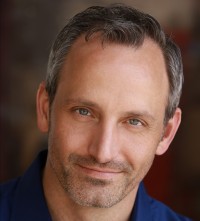 Glen Erik Hamilton’s debut novel PAST CRIMES was given a starred review by Publisher’s Weekly and Library Journal, and called “an exciting heir to the classic detective novel” by Kirkus. The next in the series, HARD COLD WINTER, will be published next March by William Morrow in the U.S. and Faber & Faber in the U.K.

A native of Seattle, Glen grew up aboard a sailboat, and spent his youth finding trouble around the marinas and commercial docks and islands of the Pacific Northwest. He now lives in California with his family but frequently returns to his hometown to soak up the rain.