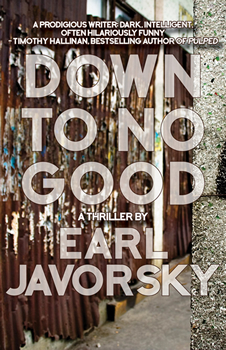 Earl Javorsky’s protagonist died in his first adventure, so of course he’s back in a new book, DOWN TO NO GOOD.

Charlie Miner, who kept shuffling on this mortal coil in Down Solo despite his condition, continues his post-life career when he’s called on by cop pal Dave Putnam to help the L.A.P.D.

A psychic-to-the stars has provided information about three murders, and it’s info that makes the police department look bad. Who better to look into a psychic than a detective who’s deceased but somewhat inexplicably ambulatory?

Charlie sets out to do his best, though he’s still struggling with what he calls Swiss cheese brain and coming to terms with his situation.

Shifting from Charlie’s first-person-point of view to third-person with Dave, Javorsky leads readers on a page-turning journey that continues the explorations of a hero who was troubled even in life, and who continues to struggle with addiction and related family issues.

It’s an interesting and rousing take on crime novel territory that’s won Javorsky a lot of praise from authors such as T. Jefferson Parker, who said of the first book in the series: “Earl Javorsky’s bold and unusual Down Solo blends the mysterious and the supernatural boldly and successfully. The novel is strong and haunting, a wonderful debut.”

The Big Thrill recently posed a few questions to Javorsky about his Charlie Miner universe.

Your protagonist’s condition certainly sets him apart from most fictional private eyes of the traditional or paranormal sort. Tell us a little about Charlie and how he came to be.

Well, Charlie wakes up with a bullet in his head, clinically dead, and somehow is able to “run” his body by an act of will. It’s no more explainable than an evil demon clown living in a sewer, if you’re looking for a rational response, but because we’re in Charlie’s head—and he, himself, is baffled by his condition—my hope is that I’ve made his predicament acceptable without putting the reader into any contortions over “suspending disbelief.”

This time around, Charlie is drawn into a case with a “psychic to the stars” who is generating a “PR nightmare for the L.A.P.D.” The psychic angle seems to make it a good fit for him. What do you look for in planning a plot for Charlie?

I had the idea a long time ago to create a plot around a self-styled psychic who is trying to make a name for herself and willing to go to any lengths to do it. Then, when I had established my Charlie Miner character, it seemed, as you say, like a good fit. Charlie, in Down Solo, had already established a working  relationship with L.A.P.D. Homicide Detective Dave Putnam, so when Dave comes to him in DOWN TO NO GOOD with a case that has irrational elements, Charlie is the logical candidate. The point is to drive the plot, given the murders and the psychic’s predictions, by Charlie’s unique set of quirks, thought processes, and abilities.

Charlie has a complicated family situation that adds an interesting dynamic to the novel. How important do you feel his “life” outside work is to the series?

Charlie is fundamentally an average guy—he had a wife, a kid, a home, and a modest but steady career. A heroin habit, beginning with a back injury and pain pills—undermined all that. His daughter is his last link to the normalcy he craves, which provides him with the motivation to try to repair things rather than just sit in a room and stay high.

You’ve been praised for the blend of thrills and humor in your work. Like a lot of fictional private detectives, Charlie narrates at least part of his own adventures, and some of the humor stems from his observations and descriptions. What do you do to get in Charlie’s head and speak in his voice?

I write Charlie Miner in first-person/present tense. It seemed natural when I began, and looking back, I can see that it serves the purpose of making his whacky internal processes acceptably (I hope) reasonable. See, drug-addict logic is different from other people’s, as the achievement and maintenance of a drug-induced state is paramount and all other motivations—showing up for work, sex, even eating and bathing—become subordinate. This creates a problem in fiction, where motivation has to be believable in order to hold a reader’s interest. Telling the story from inside Charlie’s head and immediate experience seemed like the best way of bridging the believability gap. The humor is accidental and always, to me, a fun surprise.

You’ve mentioned that you prefer the term metaphysical fiction for your work, and you’ve written of blending tales of crime with the supernatural. What do you see as the parameters for your corner of the fictional universe?

Early in DOWN TO NO GOOD, Charlie clarifies it this way: Let’s get clear on my condition. I don’t know what it is, but I know what it is not. I am not a vampire, or a zombie, or a ghost. I’m not a thousand years old, I have no superpowers, and I’ve never been a hero. Down Solo borrows from the supernatural genre only to the extent that, generally, people don’t reanimate their bodies and continue daily life. Otherwise, the novel is more or less a straightforward (well, slightly convoluted) Chandleresque mystery. So, I set some parameters right there.

In your blog you’ve written about using fiction to explore real-world problems such as addiction. Does the metaphysical approach open the door for unique takes on issues and problems?

Having experienced my own crash-and-burn trajectory from high school weekend warrior to pathetic, ’round-the-clock, drug-addled fool, I find myself interested in the idea of consciousness itself—enhanced, compromised, obliterated, or otherwise. What is it? Nobody has a satisfactory explanation, but investigating them all is somehow invigorating. I can honestly say that my initial “recreational” use had a “seeker” aspect to it; I grew up in the sixties, and we were looking for something bigger than the here and now. Of course, the here and now is all there is. It is clear to me that a fundamental shift in consciousness was required for me to lose interest in continuing to try to achieve and maintain the perfect high.

Your influences include James Lee Burke, who’s at least edged a toe into the metaphysical realm with Dave Robicheaux possibly encountering ghosts, though it’s open-ended, sort of deploying of the literary conceit of The Fantastic. At least one character mentions True Detective as well. How did your influences help shape your vision and propel you into Charlie’s realm of the unusual? How do you decide how far to take things?

Down Solo was based on two things that I borrowed. One was a barely present but central character in a really odd book—and a favorite of mine—called Cold Heaven, written by Brian Moore. The character arrives at the hospital, dead from a boating accident, but gets dressed and leaves. There is no emphasis on the paranormal; it’s just matter-of-fact, there he is, and he occasionally shows up in his widow’s life. I wanted to establish that same low-key effect but wound up taking it a bit further. The other primary influence was Christopher Nolan’s film, Memento, in which a character has an impaired memory and has to unspool the events leading to a murder in a backward fashion.

Once upon a time, series seemed always open-ended. Sometimes now we see some authors decide to cap the number of adventures for a character. Do you have a long-range vision for Charlie at this point?

I have one more Charlie Miner book conceived, with notes, but can’t see beyond that so I can’t answer the question. I have two other projects and a father-son novel that will take precedence. Unless, of course, Down to No Good inexplicably gathers a lot of attention. 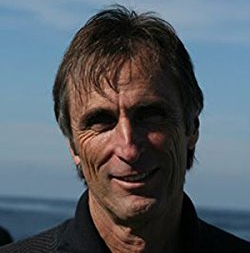 Dan Howard was born Daniel Earl Javorsky in Berlin and immigrated to the US. He has been, among other things, a delivery boy, musician, product rep in the chemical entertainment industry, university music teacher, software salesman, copy editor, proofreader, and novelist. His novels include Down Solo and Trust Me.