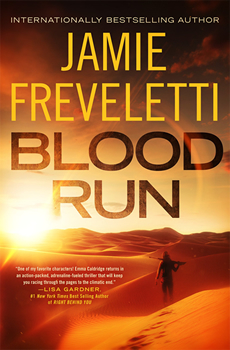 Biochemist Emma Caldridge joins Jackson Rand, pharmaceutical CEO, on a humanitarian mission to deliver vaccines to remote villages in Africa. But after narrowly escaping a crew of trained assassins, Emma realizes that there is more to this mission than she anticipated. Rand is keeping secrets from her, information that could cost both of them their lives…not to mention millions more.

After its eradication nearly forty years ago, the smallpox virus is once again threatening the world. With no known cure and limited stores of vaccine, the highly contagious, deadly and disfiguring disease has the power to wipe out entire cities. Rand’s company was hired to secure the last known vials, but some have gone missing in Africa and a ruthless government now hunts them for use as a biochemical weapon.

Emma must locate these vials before the killer plague is unleashed on the innocent, ravaging a world that never expected to see it again. She runs to the border, finding and freeing hostages as she does. But an insurgency is rising around them, blocking their every attempt to escape. Surrounded and with no choice but to head to the desert, Emma must stop the virus and lead her ragtag team to freedom…if the Sahara doesn’t kill them first.

The complexity of the political arena and the very real existence of human trafficking, biochemical weapons, and the need to protect those less fortunate than ourselves.

Emma Caldridge is a female protagonist in the action adventure thriller category. The series of (now) five books have all highlighted the current dangers facing the world from chemical and biological warfare. They also provide a hero that is female and who is fighting for what she believes is right.

Yes! Two things, actually. First, that vials of the smallpox virus were found in an old closet at an abandoned NIH building in 2012 and they had survived despite the lack of refrigeration. Reading about this gave me the idea for BLOOD RUN. And second, that slavery was only abolished in Mauritania in 1981 and was only made explicitly illegal in 2009. Was hard to wrap my head around that one. Emma ends in a march across the Sahara desert and through Mauritania and confronts this evil practice.

That despite the harsh way of life in some areas of Africa, the Africans are warm and strong people.

Lee Child, Lisa Gardner, Tess Gerritsen, Dick Francis, Robert Ludlum. All of these authors write thrillers and mysteries that I love to read. For most, their protagonists are either regular persons in unusual circumstances or have a strong moral streak. Also, all are quite intelligent.

Jamie Freveletti is the internationally and bestselling, ITW and Barry award winning author of six novels, three short stories and is a contributor in a non-fiction anthology. The latest in her Emma Caldridge series, BLOOD RUN, launched on November 14, 2017. She also writes for the Estate of Robert Ludlum’s Covert One series. A former lawyer, avid runner and black belt in Aikido, a Japanese martial art, she lives in Chicago with her family.