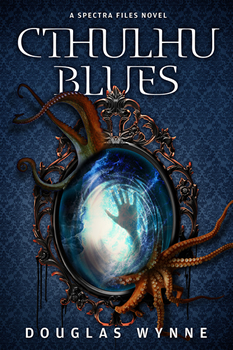 Douglas Wynne offers up a mysterious blend of music, mythos and mirrors in CTHULHU BLUES, the latest entry in the SPECTRA Files series, which wraps up a trilogy that began in Red Equinox and continued in Black January.

Don’t worry if you’re not up on the world of H.P. Lovecraft. There’s no need to be versed in the lore of Lovecraftian horror to appreciate the book or the series.

While it’s rich with Easter eggs, it’s accessible to anyone who loves action with a magical tinge. “You don’t have to get all of the references to follow the story, but there are all kinds of fun little nods to my favorite horror writers, to various systems of occultism, and to the great city of Boston,” says Wynne, who appropriately hails from Massachusetts where Lovecraft set many of his tales.

It’s 3:33 a.m. as the book opens, the point where recurring nightmares plague Becca, and soon she’ll be facing a new villain and a plot that threatens to unleash all new cosmic terror and extra-dimensional horrors tied to effects from her experiences in previous books.

Readers can expect an experience just as engaging as previous books, which have drawn high praise for the new approach to the Lovecraftian world.

The Big Thrill recently posed a few questions to Wynne about the trilogy, his writing, and this new novel, CTHULHU BLUES.

You return readers to a wild Lovecraftian world in CTHULHU BLUES, wrapping up a trilogy that began with Red Equinox and Black January. Yours is a Boston and a world plagued by monsters, cultists and cosmic horror, and of course there’s an agency devoted to dealing with such circumstances in SPECTRA. Can you briefly catch us up on what’s at work in your corner of the mythos?

The SPECTRA Files series takes place in the 2020s, following a hurricane that floods Boston. The main character, Becca Philips, is an urban explorer whose infrared photography captures evidence of trans-dimensional entities manifesting in the city’s abandoned buildings. This discovery places her in the crossfire between SPECTRA—the agency tasked with containing the incursion—and a radical cell of the Starry Wisdom church, intent on ushering the Great Old Ones into our world with a combination of ancient magic and cutting-edge technology. Becca’s relationship to both of these shadowy groups evolves over the course of the trilogy as she learns more about what’s at stake.

You have a great first line that really piques a reader’s curiosity. “On the night of the storm, Becca Philips sang in her sleep.” It’s quickly apparent she’s singing in a lost language, and more trouble is ahead.  You have a background in music and rock bands. Tell us about the blend of music and mythos here. How did music help shape your vision of H.P. Lovecraft’s style of horror?

I always knew I wanted to write something inspired by Lovecraft’s mythos, but only if I could find a unique angle to make the material my own with depth and realism. With my background in audio engineering, it came naturally to riff on the premise of Lovecraft’s story “From Beyond,” which is that by stimulating the pineal gland with certain frequencies, human perception could be opened up to reveal trans-dimensional life forms. Because music is all about altering consciousness with sound waves, it was fun exploring all of the different technologies, instruments, and manuscripts that might be used in such a battle of human perception.

As Lovecraftian readers know, monsters don’t make it into this earthly realm without some help. Tell us a little about the Crimson Minstrel and how that figure emerged in your imagination.

He’s what you might call an “avatar of Nyarlathotep,” meaning he’s an earthly incarnation of the messenger of the gods. At the end of the second book, Black January, I imagined this dark force possessing a street busker in Harvard Square, where I used to play for spare change in my guitar case back in my college days. In CTHULHU BLUES we find him coming into his power and gathering a choir of children who were born with the ability to sing harmonics the human larynx is incapable of producing. I’ve always found that image of a Pied Piper who can lure children away from their parents with the power of music to be resonant and creepy.

You’ve mentioned in previous interviews with The Big Thrill that your entry point to Lovecraft as a young reader was The Lurking Fear and Other Stories. That’s a nicely encompassing collection, from Dagon and the title story to “The Shadow Over Innsmouth.” Do you recall your first impressions of Lovecraft and the mythos? What really captured your imagination?

As a teen, I was drawn in by how weird the stories were and how freaked out the borderline-insane narrators sounded. In most of the horror I had read before that, there was a clear good vs. evil polarity and a set of rules defined by religion for defeating evil. But Lovecraft leaves us unmoored in a universe where we don’t know the rules and doubt our own significance. Rereading him as an adult, I’m still impressed with his visionary imagination, even though I’m more horrified by his racial and social views. In my own books, I’ve endeavored to take full advantage of the philosophical implications of the mythos while bringing it into the age of high-tech counter-terrorism and using that juxtaposition as a means to examine how little our tribal fears have changed over the past century.

You previously mentioned the challenge of harnessing the mythos with a contemporary pace, blending mythos and thriller. CTHULHU BLUES evokes both something like the best of Hammer Films with its blend of magic and haunted mirrors while maintaining an exciting thriller feel with a sense of action and adventure. Was the writing experience or the challenge different with this third book in the trilogy? Did you feel you were blazing new ground, so to speak?

Cosmic horror often works best in short form where it’s enough to establish an atmosphere of dread, so it was exciting to try and balance that against thriller pacing over the course of three books. Probably the biggest challenge for me was writing a series with very little outlining. There were some scenes in the third book that came from images I’d had in mind for years without knowing exactly how they would work in the context of the story. Finally writing them and seeing it all fall into place was a thrill.

What’s next on the horizon for you and how is the writing life-life balance going? Of course we have to ask, what music do you listen to when writing?

I won’t lie: it’s a difficult balancing act trying to build a writing career while running a small business and raising a kid. My wife is very supportive, but that doesn’t mean it’s easy. I’ve had a great time doing these books with a small press, but having finished the trilogy, I’m ready to go agent hunting now for a more mainstream thriller I’ve just finished. That one’s about a military mom and her young son, whose iPad gaming obsession leads to some dark places. As for music, I usually make a playlist of songs that capture the mood of the story. For the SPECTRA files, it was mostly the prog metal band, Tool. For the new book, it’s just one David Bowie song on an endless loop. 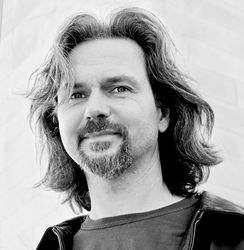 Douglas Wynne wrote his first dark fantasy novel at the age of fifteen but has never found the courage to take it down from the attic and read it. After a long detour through rock bands, and recording studios, he came full circle back to fiction writing and is recently the author of five novels: The Devil of Echo Lake, Steel Breeze, and the SPECTRA Files trilogy (Red Equinox, Black January, and CTHULHU BLUES). He lives in Massachusetts with his wife and son and a houseful of animals.