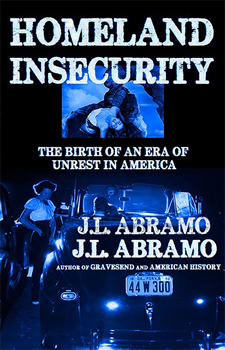 HOMELAND INSECURITY by J.L. Abramo is the story of two men accused of taking the lives of three fellow human beings—a 15-year-old girl in Mahwah, New Jersey and two young police officers in El Segundo, California. The crimes were committed 140 days apart in 1957, a time when Americans were beginning to feel less and less confident about the safety of their families. The book is also an account of the hits and misses of the law enforcement agencies and legal institutions, which—over the course of nearly five decades—eventually stumbled upon justice. Finally, it’s a look at the post-World War II American experience leading up to the murders and the profound changes to come after.

HOMELAND INSECURITY is also noted crime novelist (and journalist) Abramo’s first full-length work of non-fiction. What is it about the cases that captured his attention?

“I came across Brief Against Death by Edgar Smith at a yard sale in 1992,” he says. “The book, published 24 years earlier, was released while Smith was in his 11th year on death row in New Jersey. I had found other works written within prison confines compelling: Dostoevsky’s Notes from Underground, Soul on Ice by Eldridge Cleaver, and In the Belly of the Beast by Jack Henry Abbott. What was particularly interesting to me at the time was how Smith had managed to recruit an influential champion, William F. Buckley Jr., as Abbott had done with Norman Mailer.

“What became known as the Lover’s Lane Bandit Case,” Abramo says, “was first brought to my attention in 2003, when a 69-year-old man was arrested several miles from my home in Columbia, South Carolina. What stimulated my interest in that case was the fact that Gerald Mason was being accused of murdering two young police officers more than 45 years earlier.”

What do these cases have in common?

“There were striking coincidences in the two cases, as I have learned after over 30 years of investigating the three murders,” Abramo says. “Smith and Mason were born just eight days apart in 1934. The crimes were committed 140 days apart in 1957. The three homicides took decades to definitively solve. These facts inspired me to finally attempting to tackle these nonfiction accounts and to examine the two cases together.”

Down & Out Books is known primarily as a publisher of crime fiction. Here, Lance Wright, an editor at D&O, explains what attracted them to this true crime project.

“When Joe first approached us about publishing HOMELAND INSECURITY, his first book of non-fiction,” Wright says, “we were as intrigued as he was by the subject matter. His detailed and meticulous approach to researching the facts and history of these true-life crimes makes for a fascinating story we were proud to publish.”

We asked Abramo to talk about the challenge of maintaining a narrative structure in a non-fiction book and how that compares to doing so in his novels.

“I made the choice,” he says, “before I began the actual writing, to tell these true stories in the context of the times. To explore how the unrest in America beginning in the post-World War II years—instigated by the Cold War and Red Scare and amplified by frightening crimes against children and the proliferation of serial murders—was affecting social, political, and cultural climates in the homeland. The shift in popularity to more ‘dangerous’ or at least more rebellious icons—from Gary Cooper to Marlon Brando, Pat Boone to Elvis Presley, Betty Smith’s A Tree Grows in Brooklyn to J.D. Salinger’s Catcher in the Rye. Once I made that choice, I was able to proceed with a chronological storyline—a narrative structure I felt comfortable with from my work in fiction.”

How does his journalism background influence his fiction work?

“Although most of my journalistic work has been in the arts, theatre in particular, I have always tried to incorporate true events into my fiction. In the Jake Diamond novels, there are always allusions to the music, politics, and sports of the particular time period. In Chasing Charlie Chan, which takes place primarily in 1994, the Major League Baseball strike and the O.J. Simpson case are featured—and, since solving the mystery in that novel required digging into events from 1940s Hollywood, there is a lot of true reporting from that period as well.  The most obvious example of my journalistic background influencing my fiction is the novel American History, which follows two families through 90 years in their adopted homes of New York and San Francisco and includes a great number of true events and real-life characters.”

What was the research process—which was clearly extensive for this book—like, and how did Abramo know when enough was enough?

“The full stories of Edgar Smith and Gerald Mason came in stages, evolving through three decades of exploration,” he says. “After first reading Brief Against Death, it was some time before I became aware of Smith’s second book, Getting Out, where he described the events leading to his release after nearly 15 years in the New Jersey State Prison Death House. It took quite some time to locate a copy of that book, with the help of the New York Public Library. Then came the question of what happened to Smith after his release, and for that part of my investigation, I reached out to William F. Buckley, who kindly responded to my inquiry. I eventually located Smith and wrote, requesting an interview—he politely declined. It was perhaps at that point when I decided I had exhausted my resources regarding Smith.

“In the case of Gerald Mason, I went back to news reports from nearly five decades earlier to fill in as much as I could about the murder of the two police officers in El Segundo, California—which had become the state’s longest unsolved cold case—and followed up by following the trial in California.

“Smith and Mason both passed away in 2017, 57 days apart—and that was when my explorations came to an end, and I was ready to see what I could do with what I had.”

We asked Abramo to talk about how today’s media influences the way trials play out in the court system and the Court of Public Opinion. Does the media challenge the presumption of innocence?

“Particularly in the case of the Victoria Zielinski murder, the media seem to have had a great influence on the outcome of the trial—newspaper articles were very biased toward Smith’s guilt, and a change of venue may have been appropriate,” he says. “I think Smith himself answers your question as well as I could in his interview on Firing Line immediately following his release.”

“Presumption of innocence,” Smith said on the show, “I don’t think means too much in a courtroom. You arrest a man, and put him in jail, hold him for seven, eight months, a year. Then bring him to trial. Bring him into a courtroom in handcuffs. Sit him down in front of the jury, with a few guards standing behind him. It’s very difficult to say to that jury, this man is innocent. He hasn’t done anything. The jury looks at him and thinks why has he been in jail for a year? Why is he handcuffed if he didn’t do anything? He must have done something. Presumption of innocence is a very difficult thing to believe in anymore.”

So what’s the work-in-progress?

“My next offering will be a collection of previously published and unpublished short fiction—combined with a number of non-fiction essays and journalistic pieces focusing on the history and nature of crime and true crime genres,” Abramo says.

And if Abramo could put together his dream panel for ThrillerFest—participants need not be living to participate—whom would he invite, why, and what would the topic be?

“I’d love to witness a panel with Dostoevsky, Victor Hugo, Harper Lee, Charles Dickens, and Richard Wright discussing whether or not The Brothers Karamazov, Les Misérables, To Kill a Mockingbird, A Tale of Two Cities and Native Son could be categorized as crime fiction.”

J.L. Abramo was born and raised in the seaside paradise of Brooklyn, New York on Raymond Chandler’s fifty-ninth birthday.

To learn more about Abramo and his work, please visit his website.