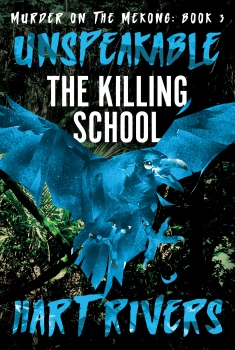 If you flew like a nightbird into the Mekong Delta jungle near Saigon, you would find The Killing School. Required studies: Mind Control, Persuasion Techniques, Pharmaceutical Interventions. Those afraid of the dark and the darkness of humanity need not apply.

In a CIA dark ops house of horrors known as The Killing School, Ghost Soldier Jerry Prince aces all the requisite subjects as the experimental model for an elite modern warrior, programmed for maximum killing efficiency in future wars. His stunning physical, emotional, and psychological transformation is the work of a brilliant scientist whose twisted Frankenstein agenda is underwritten by the world’s most powerful dirty diplomat, Ambassador Phillip Jordan.

But when J.D. Mikel, the CIA’s most valuable assassin, goes rogue, and internationally renowned war photographer Isabelle Chen is sucked into an affair where death and love brutally intertwine, the race against time and the enemy within goes far beyond the perils of a dark and grueling war speeding toward its cataclysmic end.

Because when no one is who you think they are…

When you don’t even recognize yourself…

Even the most innocent players can become part of something—

The biggest challenge of UNSPEAKABLE: The Killing School was to create a stand-alone novel that was the third and final book in the Murder on the Mekong series with returning characters and plots that were informed by the previous releases. Also highly challenging was to take actual historical events and blend them into a fictional narrative with interwoven current themes (such as MDMA/psychotropic therapies for PTSD). As for the biggest opportunity, there has been movie interest in the series with a well-regarded screenwriter continuing to shop the project around.

The psychedelic/LSD aspect of psychotherapy plays a prominent role in plot and character development and should be prominently owned in the copy but is not even mentioned on the back cover (alas, the entire back cover should be completely rewritten).

Having authored many novels over many years as Olivia Rupprecht and Mallory Rush, it was a very different experience to co-author an entire series with Dr. John Hart. He brought things to the table I do not possess: a psychotherapy background, screenwriting experience, and time served in the Vietnam War; he is also a master plotter with a marvelous grasp of our interior workings and character development. We have worked together for ten years now on the Murder on the Mekong series, and it’s hard to imagine penning a book solo again.

John, creator of the Murder on the Mekong series, has been a practicing psychotherapist for over 45 years, starting in Vietnam where he was a psychology specialist. He received his doctorate from the University of Southern California, is an internationally respected lecturer, has been a consultant to the nation of Norway for their Fathering Project and maintained a private practice in Los Angeles for twenty years. His time is divided between Hawaii, where he enjoys snorkeling, stand-up paddle boarding, and is a featured artist at the Mauna Kea Hotel—and Vancouver Island, BC, where he is an adjunct associate professor at the University of Victoria in British Columbia involved in developing a Forest and Nature Therapy program.

To learn more about John and his work, please visit his website.

Olivia is an award-winning author whose novels have sold worldwide. She has managed fiction and nonfiction projects for major publishers as a ghostwriter, book doctor, and developmental editor, and was series developer for the groundbreaking reality-based novel series from HCI Books, True Vows. Olivia lives in a historic tavern on a lake in Wisconsin.

To learn more about Olivia and her work, please visit her website.

To learn about their novels together, please visit their website.