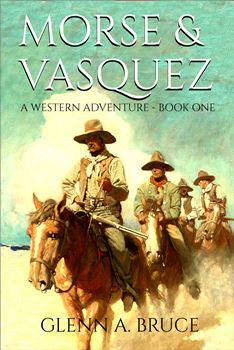 Exciting historical fiction about the years-long tense standoff between legendary gentleman Californio bandit Tiburcio Vasquez and equally legendary western detective lawman Harry Morse. Story covers both men’s young lives from their teenage years to Vasquez’s capture and demise at age 40. Vasquez claimed never to have killed a man but was hunted by countless Anglo lawmen over his two decades of robbing stages, banks, trains, and just about any other Anglos he came across. Harry Morse was in the chase the longest and was crucial in ending Vasquez’s run by being the first lawman to pinpoint his location—and be there for his hanging.

Since this is historical fiction, the characters started it all. My friends Larry and Petra Jarvis came to me to write a miniseries about Tiburcio Vasquez and, in doing research, learned about Sheriff Harry Morse and his dogged pursuit of Vasquez over about twenty years in California of the mid-1800s.

Fleshing out a true story in a fictional form. I had done it before with the Sacco and Vanzetti story, so I wasn’t new to the genre. But I had not written about the Wild West. Having lived in California 21 years, though, I had a feeling for the locations and was sucked into the history of it all. Finally, making it an exciting action-packed read with plenty of thrills and some mystery made it a challenge that proved to be a fast, entertaining, and educational read.

Reading tons of research, much of it at odds with other articles, etc., then distilling down what seemed most likely to be the truth of what happened, or as close as I could get to it.

I didn’t know about those Californios—people of Mexican heritage who were born in California, felt it was their ancestral home, and that the Anglos were impinging on their birthrights.

How much work went into writing a multi-hour miniseries then turning it into a three-novella trilogy. Also, Harry Morse went on to be one of the most famous detectives in California, even bettering Pinkertons at times.

Q: What are the thriller elements?

A: Because Vasquez managed to elude capture multiple times, incurring multiple injuries in the process of several narrow escapes, his story is thrilling on its own. But add Harry Morse’s relentless and often exasperating pursuits, several of which nearly cost Harry his life as well, and the two-decade cat-and-mouse story builds one thrill after another until its logical if likely unfair ending.

Glenn A. Bruce holds an MFA in writing from Lindenwood University and writes in a variety of genres from thrillers to sci-fi to literary fiction. He has had over a dozen novels published and “in another life” wrote the screenplays for Kickboxer, Cyborg Cop, and Victor One: Undercover Cop, as well as episodes of Walker: Texas Ranger, Baywatch, the original G.L.O.W. Show, and Cinemax’s Assaulted Nuts, as well as several uncredited “page-one script doctor” rewrites. His short stories and poetry have appeared internationally, including The Best of Brilliant Flash Fiction, Shotgun Honey, Switchblade, Blue Crow, RedFez, Defenestrationism, Alfie Dog, KY Stories, Loud Zoo, Flights (Sinclair College Journal), The Rain and Disaster Party Society, Black Dog Review, Capsule Stories, Backchannels, Green Silk Journal, Dave Higgins’ Outsiders Within, The Rabbit Hole, and many others. He was a twice-finalist in the Defenestrationism short story contest and won Also That’s “Down & Dirty” short story competition. His articles and essays have appeared in The Good Men Project, Heart and Humanity, Beat Poets of the Forever Generation, Carolina Mountain Life, and The Earthen Lamp Journal, among others. Glenn lives in Florida, where he just completed his 37th novel.