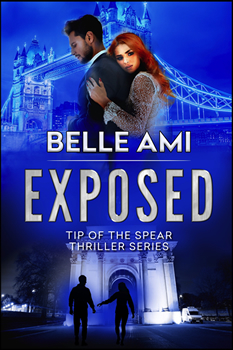 In Belle Ami’s EXPOSED, book four of the Tip of the Spear series, an Iranian diplomat’s house in London explodes in a fiery inferno, killing him and his family on the eve of his daughter’s wedding. As the world reacts in shock, Iran lays the blame at Israel’s feet. A few hours later, a young woman claiming to be the diplomat’s daughter shows up at the Israeli embassy in London. Jazmin Amin will only speak to Cyrus Hassani, a top Mossad agent who knew her father while working undercover in Iran. Has Jazmin’s father turned against Iran, gathered evidence against the regime, and paid the ultimate price?

Cyrus realizes that Jazmin, as the only witness and survivor of the fatal attack, now has a target on her back. With Jazmin’s help, Cyrus and his team of elite agents deploy an ingenious but risky plan to track down the evidence—a plan that could have deadly consequences.

“Tip of the Spear is my super-action-packed espionage thriller series with romantic elements,” says Ami. “The first four books have centered around my main hero, Cyrus Hassani, an Iranian-Jewish Mossad agent who is the leader of a secret unit within Mossad. Cyrus’s primary focus is keeping Israel and the world safe from Iran and its nuclear aspirations.

“I adore my hero, who is kind of like a modern-day James Bond. He’s my version of a superhero spy, dedicated to keeping the world safe.

“Ironically, much of what I write about in this series has come to pass, including what is currently happening in the Middle East today. If you understand the players on the world stage it becomes easier to predict what they might do.”

EXPOSED in particular was inspired by what Ami calls “the quiet revolution. But it is the struggle of the Iranian people to break free from their oppressive government and the theocratic tyrants in Tehran who rule them.” 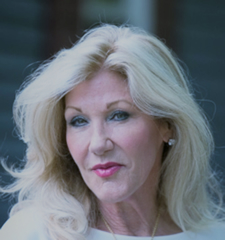 She chose the Middle East as the setting for her series because “history is being written every day in the Middle East. The threat Iran poses to world peace is extraordinary, but as a country and culture, Iran is incredibly fascinating. As are its people. I have many Iranian friends and I draw on them when I need help with a character or the culture or language.

“My book ideas are generally triggered by something I’ve read, either in a research book or in the news. I collect news articles, and friends are always sending me articles too. A lot of the ideas come to me in dreams. Once the seed is planted, I begin the research phase, which is rather intense and time-consuming. I read a lot of books pertaining to the subject, and I mine what is available on the Internet. Then I create a loose outline of what happens in the book. This is not a chapter-by-chapter breakdown, but rather a roadmap of possible paths to follow and plot points I want to hit. It fluctuates during the writing process. I’m open to the influence of the characters’ voices on the action, and again ideas that come to me during the creative process.”

Her research is so successful that many readers believe personal experience colored EXPOSED and other Tip of the Spear titles. “I’m not a particularly fast writer, and my genres require a great deal of research. I did not serve in any military or intelligence service, so it takes me longer to accurately portray those worlds. I do meticulous research, so the facts become embedded in my mind, but then I’m able to sift through what is known and begin to ponder what is unknown. I’m pretty proud of the end result and the emotional authenticity of my characters and their voices.

“Everyone who reads my books thinks that I have spent significant time in Iran or the Middle East, or that I was involved in the intelligence world. I’m not a secret agent, but maybe in a past life. Sometimes I regret that I didn’t choose a career path in the intelligence field. I think I would have made a good spy. As far as Iran goes, traveling there is definitely on my bucket list (when it’s safe to do so). I’ve been to London, Zurich, France, many times, as well as Israel.

“I’ve said it in interviews before: I’ve traveled the world through books. Being a voracious reader pays off in dividends in your writing.”

And Ami is keeping herself busy. She has another active series, Out of Time, which is her time-travel, historical thriller/mystery series. Last year she had six titles that debuted and already this year she has two titles with her editor, another in progress, and due to a three-book publishing deal with Dragonblade Publishing, will begin working on a time travel/mystery/romance/crime/historical series set in various eras—Victorian, Edwardian, and just before World War I.

“The next [Tip of the Spear] thriller…has basically been plotted out. The star is going to be Zara Zayani, my former femme fatale French journalist/DGSE agent,” she says. “With Iran again making headlines with the recent attack on the nuclear enrichment plant at Nantanz, there’s plenty of material to draw from.”

When asked how many more novels she thought there would be in the Tip of the Spear series, she says, “I can’t make predictions, but I hope many more. I kind of live each book one at a time. The only thing I’m sure of is I will write the next one, which is book five. I’d love to call it The Spy Who Loved Me, but I think that title is taken.

“Right now, I have more books in mind than I have time to write.

“I want my readers to be entertained, but I also enjoy informing readers about the world we live in. If you want the world to be a better place, learning about current events and history is the best teacher. But at the end of the day, it’s about conveying truth and authentic emotion through my characters and hopefully connecting with readers in that way.

“Most of all, I hope EXPOSED leaves you wanting more.”

Belle is the author of the international espionage thriller series Tip of the Spear, which includes the highly acclaimed Escape, Vengeance, and Ransom, and the newly published EXPOSED.

Her new series is the Blue Coat Saga, which includes The Rendezvous in Paris, The Lost Legacy of Time, and The Secret Book of Names, a dual timeline story about WWII and the Holocaust and a young woman’s promise to her grandmother.

Belle is a Kathryn McBride scholar of Bryn Mawr College in Pennsylvania. Her passions include hiking, boxing, skiing, spinning, cooking, and of course, writing.

She lives in Southern California with her husband, two children, a horse named Cindy Crawford, and her brilliant Chihuahua, Giorgio Armani. You can find out more about Belle and her books by visiting her website, www.BelleAmiAuthor.com.

Belle loves to hear from readers.