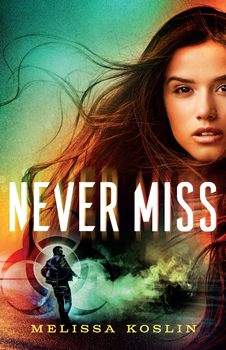 Those two loves come together in her latest novel of romantic suspense, NEVER MISS, in which a former CIA sniper comes out of hiding to save the life of a scientist whose research seems to prove that the Ebola virus was man-made—and is about to be weaponized.

“It’s not about a badass guy that comes to the girl’s rescue,” Koslin says. “She’s the one with the black ops training, and they save each other on multiple levels. They are equals.”

While it’s true that Kadance Tolle feels compelled to help find the Mastermind hunting Lyndon Vaile, doing so puts her in extreme danger—she comes from a family of assassins who are looking for her. And Kadance doesn’t want to be found.

Now, Kadance and Lyndon must risk both their lives—and their hearts—to stop a bioattack on the State of the Union address before it’s too late.

In this interview for The Big Thrill, Koslin talks about how personal connections and firsthand research helped her write the kind of action scenes that will keep readers hurtling toward the last page as the clock ticks down and time runs out.

I’ve long been fascinated by the role of the sniper—it requires a very specific skill set. What drew you to creating that facet of Kadance’s character?

I have a friend and a cousin who were military snipers, and I really enjoy target shooting with pistols and my 10/22 rifle (though I’m no sniper!), so I guess all that contributed to the idea of writing a sniper.

What kind of research was required to execute the sniper scenes? Was there anything that surprised you about the research?

I read lots and lots of articles, and I also had a former Marine sniper read those scenes to make sure they were all technically accurate. Learning about tracer ammunition was cool—I really wanted her to blow something up by shooting it! And learning that the best snipers take the Coriolis effect into account blew my mind.

I swear I did not write this book in 2020 and did not model anything about the COVID-19 pandemic. It was finished long before COVID-19.

NEVER MISS is certainly full of suspense with high stakes, but it’s also a romance. Tell us a little about Kadance’s love interest, Lyndon, and why they complement each other.

Lyndon is a scientist with three doctorates—logical and rational down to his core, and generally not great at understanding the emotional behavior of other people. They are complete opposites in a lot of ways. Sometimes that causes some friction, but for the most part, they balance each other. I really wanted them to be completely different but equal. The story required both of their skill sets—they could not have succeeded if they hadn’t worked together and trusted each other.

When it comes to romantic suspense, there’s a necessary balance between the suspense and the romance. Is that balance plotted, or does it come more organically from the story and the characters?

I’m a plotter, not a pantser, though I do allow flexibility as the story moves. This book has a strong element of romance, but the suspense is probably more dominant. I think that comes naturally in a story that’s about large-scale terrorism. While both Lyndon and Kadance are personally and deeply linked to the unfolding events, the plot and consequences are much bigger than the two of them.

I read in your bio that you are a fourth-degree black belt in and certified instructor of Songahm Taekwondo. How has that experience enhanced your writing in general, and specifically of action scenes?

It allows me to write technically accurate scenes, and I like to think they’re more interesting than they would be if I didn’t have that experience. I can add the mechanics, how people move when they strike or are struck, and I understand how fighting isn’t all clean and pretty or simple—it’s messy and interesting.

NEVER MISS features a charming and courageous cat named Mac. Is he real?

Yes! He is my cat. Although real Mac isn’t quite as brave as fictional Mac. But he’s just as smart.

Mike Nappa. He writes Christian fiction that’s powerful but not preachy. He conveys intensity without cursing or gore.

Melissa Koslin is a fourth-degree black belt in and certified instructor of Songahm Taekwondo. In her day job as a commercial property manager, she secretly notes personal quirks and funny situations, ready to tweak them into colorful additions for her books. She and Corey, her husband of 20 years, live in Jacksonville, Florida, where they do their best not to melt in the sun.

Find more information on her books at MelissaKoslin.com.