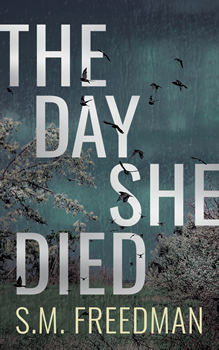 As an adult, S. M. Freedman had forgotten most of the horrific nightmares she had as a child. But while writing THE DAY SHE DIED, one kept coming back to haunt her.

“In it, I’m strapped into a chairlift seat that’s taking me down into a putrid and hellish pit, where I know I’ll be tortured forever,” she says. “This dream, and the anxiety it induced, became the thematic landscape for everything that happened to Eve both before and after her brush with death.”

In the opening scenes of THE DAY SHE DIED, 27-year-old Eve Gold is just trying to survive after a car crash nearly killed her. She’s desperate to return to her former idyllic life—a successful career as an artist, marriage to her first love, and the possibility of motherhood—but her now-damaged brain is teasing out repressed memories from her troubled childhood, unearthing the dark secrets and lies that could destroy everything she’s worked for, and leave her forever scarred.

In this exclusive interview with The Big Thrill, Freedman discusses life, death, and how the two intertwine in her twisty new thriller, THE DAY SHE DIED.

Eve is faced with tremendous obstacles following her car crash. What kind of research was required for you to flesh out her injuries with authenticity? Was there anything that surprised you during the research?

While I did extensive research on Eve’s injuries and the psychological aspects of her trauma, I researched the topic of near death experiences the most. Her heart stops for several minutes after the accident, and I wanted to figure out what happened to her. Her time on the other side of life becomes a slick fog from which she can’t escape. During my research, I came across a case study that surprised me. It interviewed thousands of people around the world who had come back from death. They all reported similar memories of their time in the afterlife, no matter what their cultural background or religious beliefs. It certainly gave me food for thought.

During the daylight, it’s easy to wrap a thick cloak of denial around the fact that someday—maybe soon—I’ll take my last breath. Doing so allows me to stay sane as I go about the lovely and mundane tasks of daily life. To write this book, I had to strip off that cloak of denial and really face the horror of my own impermanence. What was waiting for me on the other side of life? How would my actions on earth be judged? 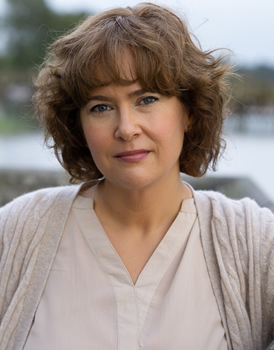 I’m fascinated by your previous career as a private investigator. What skills from that job have transferred to your writing career?

My theatrical training at the American Academy of Dramatic Arts and the decade I spent as a private investigator left me with few concrete skills to take into the workforce. But as it turns out, they come in handy for writing. My acting training taught me how to dive deep into a character’s psyche and backstory, which hopefully helps me create well-rounded and authentic characters. My time as a private investigator taught me how to do proper research, how to dig beneath the surface, and how to never trust what’s obvious.

I read in your bio that you’re a Vancouver girl—I was born in Trail, my husband in Chilliwack, and our entire families are in British Columbia. It’s a gorgeous province. What aspects of Vancouver did you want readers to get a feel for after reading THE DAY SHE DIED?

BC is truly a great place to live! The Vancouver atmosphere played such a key role in this book it became almost like another character. It is set along a fictionalized area of the Fraser River. The fog, the damp bite of the air, the quicksilver leaves heavy and glistening with rain—all these atmospheric goodies became crucial parts of the story.

THE DAY SHE DIED is your third book. How has your approach to writing changed since your debut? What advice would you give to aspiring scribes?

I’ve developed a better writing process. With my first book, The Faithful, I had no clue what I was doing. I stampeded through it, uncertain where I was going or what I was trying to say. It’s a complex book, and it needed significant edits and rewrites. I wouldn’t say I’m a plotter now, but I’m more of a plotter than I used to be. I’m also more particular in choosing words and imagery. Every word can change the nuance or direction of a story, so I’m always on the hunt for the right one. My advice for aspiring writers is the same advice I give myself every day, which is to write the damn story. The first draft may be terrible, but you can’t edit a blank page.

What influence has ITW had on your career?

The author community I’ve met through conferences such as ThrillerFest is so kind and generous. I spent a day learning from Steve Berry during CraftFest, and his guidance was invaluable. I also found my agent because of PitchFest. I’d been querying agents for many months, but it took meeting agents in person to really get the ball rolling. After PitchFest, I ended up with three offers of representation! I sure look forward to the day when we can all meet in person once again.

My next book, Blood Atonement, is currently sitting with the publisher. Hopefully I’ll have more news on that soon. I’m currently working on the third and final installment in the Faithful series, and writing the first in what could potentially be a new thriller series that delves deep into mystical Judaism.

S. M. Freedman is the author of The Faithful and Impact Winter. She studied at the American Academy of Dramatic Arts and worked as a private investigator on the not-so-mean streets of Vancouver, where she lives with her husband and two children.