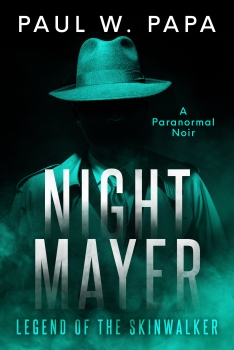 A wealthy man, R. J. Hawthorne, in the middle of a grand construction project takes his own life, leaving his majority interest in the project to his most ardent rival. His partner, William J. Pierce, not believing Hawthorne would take his own life, hires paranormal specialist P. M. “Night” Mayer to investigate the death. From the onset, Mayer has a feeling something other than suicide is the cause of Hawthorne’s death. He soon discovers that a force as ancient as time—a Native American skinwalker—sworn to protect the area, is at work. Now he must not only find the creature, but stop it before it kills again. And if that isn’t bad enough, Mayer finds that a new resident to the area may hold the key to his parents’ death.

I always hope readers learn something from my books. Because I also write nonfiction, I enjoy slipping real places and people into my books—of course I use them fictitiously, but the people and places do exist. For example, Mayer’s home base so to speak is Atomic Liquors, and the people who own the place in the book really owned it at that time. 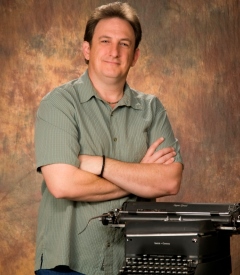 Because I use real places in Las Vegas, I have to do quite a bit of research. For example, Sahara Avenue was called San Francisco Street in the 1950s, and Fremont Street was vastly different from what it is in 2021. I have to find authentic maps and make sure the places I mentioned really existed at the times. And while that can be a challenge at times, the old investigator in me loves it!

I didn’t know much about skinwalkers when I started this book, and being fascinated by Native American culture, I was excited to learn more about this part of the Navajo belief system.

The idea for this book came to me one day while I was watching the television show Supernatural. I love that show and find it to be very well written. But I also love crime noir—authors like Raymond Chandler and Dashiell Hammett—and so I started thinking: “What if Raymond Chandler wrote an episode of Supernatural?” And that is what brought me to write NIGHT MAYER.

I am heavily influenced by Raymond Chandler and Dashiell Hammett, as well as the many, many great crime noir films. Their method of writing and the dialogue used…I just love it!

Paul W. Papa is a full-time writer and ghostwriter who has lived in Las Vegas for more than 30 years. He developed a fascination with the area and all its wonders while working for nearly 15 years at several Las Vegas casinos. In his role as a security officer, Paul was the person who actually shut and locked the doors of the Sands Hotel and Casino for the final time. He eventually became a hotel investigator for a major Strip casino, during which time he developed a love for writing stories about uncommon events. When not at his keyboard, Paul can be found talking to tourists on Fremont Street, investigating some old building, or sitting in a local diner hunting down his next story.