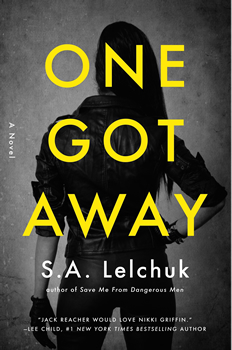 Thrillers have long followed heroes who set out to help victimized women, but rarely have those heroes been believable, well-developed female characters. It’s time to meet one now: Nikki Griffin, the star of ONE GOT AWAY by S. A. Lelchuk.

When she isn’t on a case, private detective Nikki Griffin runs a small bookstore. But when the matriarch of one of the richest families in San Francisco gets ripped off, Nikki takes the case: find the money and the con man. We learn right away that Nikki is not your typical lady sleuth. For example, ONE GOT AWAY opens with Nikki pulling up on her red Aprilia in her biker jacket and motorcycle boots.

“She has a certain style and can make an entrance,” Lelchuk says. “But she’s not extroverted. At a cocktail party you’d more likely find her debating 19th-century British literature in a quiet corner, not holding court in the middle of the room. She doesn’t like being the center of attention. Her idea of a perfect Friday night is takeout Chinese food while watching classic film noir with her boyfriend, Ethan.” 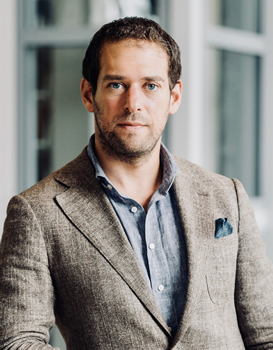 “That’s a key difference, to her,” he says. “She doesn’t walk around thinking about the Next Great Deed to pull off. But if someone is in trouble, she’ll take significant risks, if necessary, to help them to safety. That’s her nature; she almost can’t help herself.”

Clearly, Nikki is no fan of men who hurt women. Her secret mission, born of revenge and trauma, is to do everything she can to get women out of dangerous situations and punish the men responsible. She takes on this mission because in her childhood, her family was the victim of a terrible crime, and she spent her youth trying to recover from this while also finding direction and purpose for herself in the world, like most young people.

“Nikki knows pretty early on that she has qualities which lend themselves to PI work,” Lelchuk says. “She’s solitary, observant, patient, methodical, and violent if necessary. Simultaneously, she’s a lifelong lover of books. In her mind books saved her, in a very real way, from giving in to her more reckless tendencies. When she begins selling used books in Berkeley, she finds that she loves the community aspect the work brings.” 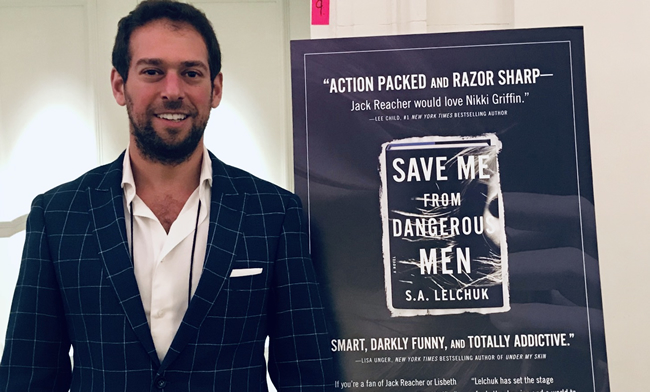 Lelchuk was one of the ThrillerFest 2019 Debut Authors with Save Me from Dangerous Men.

In ONE GOT AWAY, Nikki’s case is connected to a second mystery introduced in the prologue by way of an ugly crime scene. Nikki is unaware of all that when she is hired by the high-society San Francisco family to track down a charismatic British con man. But she realizes pretty soon that no one is being completely honest with her. Then she sees that there might be something much worse going on. Along the way she encounters many gradations of bad, which fits with her belief in proportional response.

“Nikki is something of a vigilante,” Lelchuk says, “but her responses are absolutely governed by her own moral code. As she tells one character, ‘My compass spins a bit differently. North, for most people, isn’t always quite north for me.’ Nikki is someone who cares fiercely about injustice and righting wrongs, particularly if the victims are defenseless.” 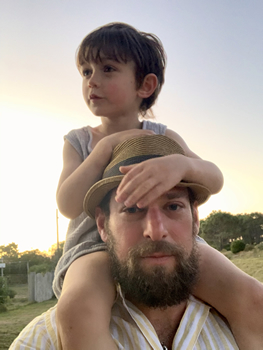 Winter 2020. Just before the pandemic hit Lelchuk was down in Uruguay, finishing his second book and giving his godson, Felix, plenty of free transportation.

That’s why, when she finally realizes the scale and nature of the central crime, it’s not in her nature to let it go, especially since she seems to be the only one who cares about it.

It seems important that Lelchuk sets this series in the Bay Area, with what he calls staggering juxtapositions when it comes to not only landscape but socioeconomic splits.

“One of the things I wanted to do in these books was to play with sharp contrast. Nikki finds herself in a few eye-popping San Francisco penthouses and Monterey resorts, but I wanted to send her a bit of everywhere,” he says. “She ends up in a seedy auto garage in San Jose, driving through endless strawberry fields in rural Salinas. One of the final scenes shows her riding up Market Street in San Francisco, seeing these sleek towers housing these multibillion-dollar tech companies, all with homeless people sleeping in the doorways.”

When Lelchuk writes locations, he’s not just invoking the physical dimensions and feel of a landscape, but also suggesting what larger things might be true about a place. Consider that Nikki’s bookstore, the Brimstone Magpie, is on Telegraph Avenue in Berkeley. 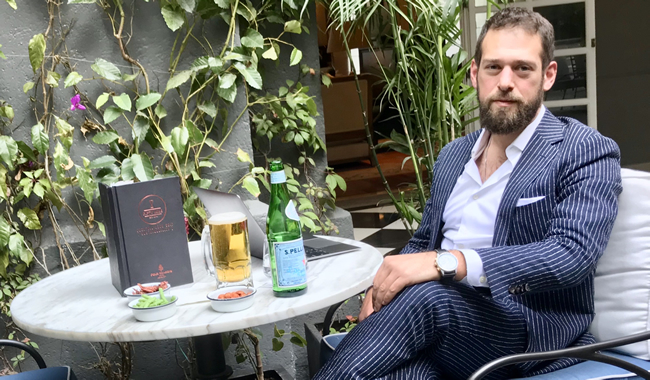 Lelchuk in Mexico City, finishing final revisions on his first book. When he’s on a deadline, his favorite go-to is to hole up in a city where he doesn’t speak the language or know anyone.

“I’d say Berkeley is without a doubt one of the best places in the country when it comes to bookstores,” Lelchuk says. “There is such history, there are just so many great bookshops—despite the loss of some gems that have sadly closed. The Brimstone Magpie is not based off any one particular bookstore; it’s more of a composite. But I think anyone who walked around that part of Berkeley might find some familiarity in places like Moe’s or Pegasus or Books Inc.”

Publisher’s Weekly called this novel a “breakneck-paced thriller.” When asked the secret to keeping a novel fast paced, Lelchuk immediately credits great editors. He says they were invaluable when it came to looking at the story and figuring out how to keep it taut and where to trim to keep it propulsive. But he also didn’t want his book to be high-octane action on every page. 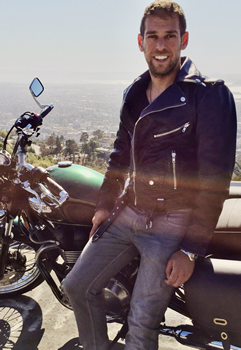 Lelchuk riding in the Berkeley Hills near San Francisco Bay. He doesn’t have a red Aprilia motorcycle like his protagonist, but they do share a fondness for two wheels.

“I think a lot of pacing is choosing your moments and making them count,” Lelchuk says. “I always think of the film Raging Bull—it’s a two-plus hour movie about boxing, and yet there are less than ten minutes of actual in-the-ring boxing. When I do violence, or a fight scene, I try to pick and choose the right place, use that ingredient sparingly, and really build up the tension to that moment.”

Lelchuk has big plans for Nikki as the series continues. In the future he says he would love to show more of her backstory—who she used to be, and how she got to where she is.

“The Nikki we see in this book is experienced,” Lelchuk says. “She’s been doing this work for a while; she has a lot of confidence in her own abilities. I think it would be fun to take a look at her in some earlier time, when she lacked this surety and was finding her way a bit more.”

Before you see all that, you need to get to know today’s Nikki Griffin. Start by reading ONE GOT AWAY.