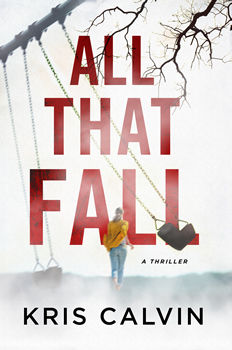 You’ve got to love a ticking clock in a thriller—once it starts to count down, it’s hard to stop reading. It’s even more difficult when the stakes are as high as they are in Kris Calvin’s debut thriller, ALL THAT FALL.

Things start peacefully for her protagonist, Emma Lawson, who’s the youngest lead government ethics investigator in Sacramento. Emma has taken a day off to help her best friend, Kate, prepare for the opening of her new preschool business. But within hours, the morning takes a nightmarish turn. The school’s most high-profile enrollee–the governor’s granddaughter–is kidnapped, and Kate’s teenage son goes missing.

Over the next harrowing 48 hours, Emma is in a desperate race against time to save the child and stop a calculating killer whose plan threatens all that Emma holds dear. Along the way, she has to untangle a web of clues that point toward sordid secrets and a cold-case murder in a shadow world of bigotry and hate. It’s an engaging and suspenseful read that will keep the reader hooked.

Calvin says her story originally centered on Emma’s relationship with her best friend’s son, 15-year-old Luke. She saw him as someone who appeared headed for trouble, and the danger and drama that would ensue when Emma intervened. But her characters had other ideas for her intriguing story and led her in an unexpected direction. 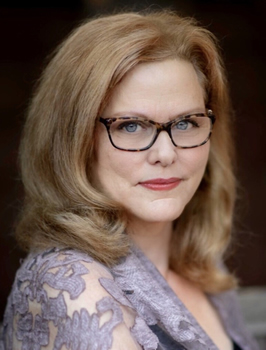 “Three-year-old Vivian showed up and was kidnapped so the story took a completely different turn.” It’s something that happens to Calvin when she’s writing. “I’m one of those writers whose characters and their paths seem to develop on their own. It sounds a little crazy even to me, but I think there are a significant number of authors who write this way.”

The fictional Emma is a government ethics investigator. Calvin is a former elected official and expert in child advocacy who knows her way around politics. She brought that real-life experience to the novel, and it shows. “Sacramento is a diverse and vibrant city, but it also has many of the hallmarks of a small town. The 120 legislators and their staff and the interest groups who court them all together aren’t much bigger than the student body of a large high school, and the same dynamics of ‘in-group’ and ‘out-group’ and ‘everyone is in everyone else’s business’ applies.”

The link between everyone’s business makes for a plot that contains a number of unexpected twists and turns that will keep the reader guessing until the last pages. Calvin’s fluid approach to plotting no doubt contributes to the surprises that await. “I start with a character or two, which may or may not include the protagonist, put them in a setting, and know that I want something to happen quickly that signals an adventure is about to begin. Because that’s what I view myself as writing when I write thrillers and mysteries: adventure stories for adults.” 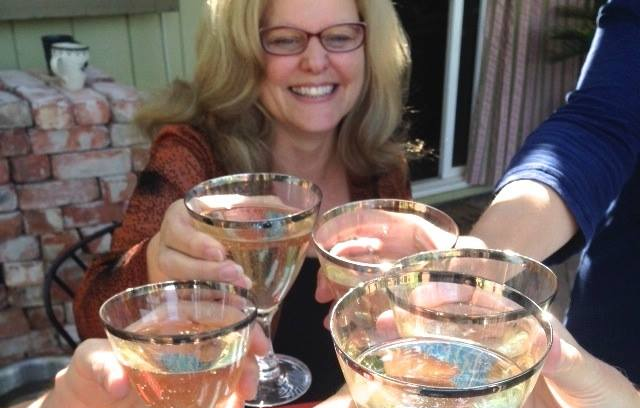 Calvin gathered with friends before the pandemic to toast her new career as an author.

That sense of adventure means that the early versions are purely creative, which Calvin acknowledges. “The first few drafts of a book always come from my heart.” After that, it’s down to the painstaking work of making sure that all the moving parts fit together. “I move to an analytical mode, with detailed charts and spreadsheets and poster-size diagrams covering the walls of my study. I focus on pacing and structure, and at the end of each chapter I ask myself what questions the reader will have that will keep them interested and turning the pages. If I don’t have sufficient questions in mind from the reader’s perspective, I ask myself if that chapter is needed, and if it is only providing backstory, am I able to do that in some other way?” Calvin doesn’t let up until she’s completely satisfied. “For ALL THAT FALL, I did 17 drafts.” 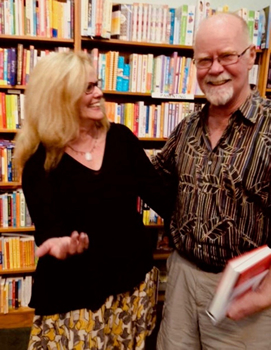 Those drafts were completed with the added pressure of the global pandemic. Many writers have spoken of and written articles on the challenges of writing during these difficult times. Calvin managed to stay on task and credits that discipline to keeping her existing writing habits.

“I’ve worked one or two jobs simultaneously with long hours throughout my adult life, including through the pandemic,” she says. “As a result, my writing habits didn’t change much when COVID-19 hit. I was still up in the morning by 4 a.m., writing as long as I could until I had to turn my focus to my other work. Even since last month, when I was finally able to shift to writing almost full-time, I have kept the same schedule—I’m a morning person so that is best for me.”

Alongside writing, reading is also one of Calvin’s passions. Fortunately, this is something she’s been able to continue in the current circumstances. “I read two to three fiction books weekly and have for decades. I generally prefer series to standalones. A few that inspired me to write my own thriller series are Meg Gardiner’s amazing UNSUB books, Chris Holm’s flawless Michael Hendricks series, and Lee Child’s incomparable Jack Reacher. I started writing, in part, by reading John Lescroart’s long-lived Dismas Hardy series. I still check in frequently with John’s work, reminding myself of gold-level rhythm or dialogue when I’m having trouble staying on track with my own. I’ve also learned a great deal that’s made it into my writing from workshops at ThrillerFest and elsewhere with Meg Gardiner, Bob Dugoni, Lee Child, Catriona McPherson, and Eileen Rendahl.” 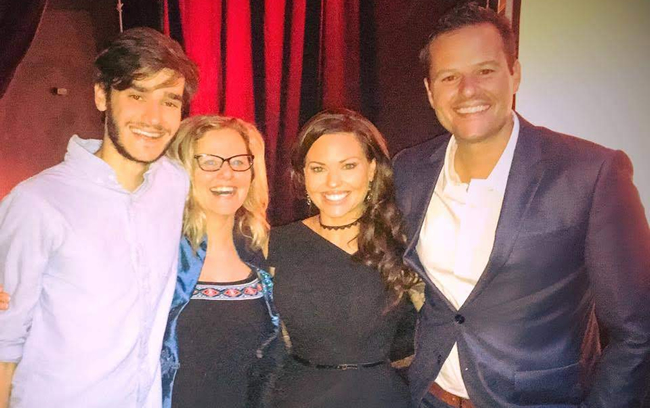 Calvin with her three children.

And now Calvin can continue with her own series. “I’m under contract for Book 2 in the Emma Lawson series, so that’s what I’m working on now. I’d like to write an Emma book a year for as long as I can. She’s only 32 years old and given the work she does as an investigator in Sacramento, I know she has lots of stories left to tell.”

Readers will be anticipating those stories, but Calvin has a wish list of her own.

“I’m looking forward to raising a glass with friends and family and catching up, as soon as circumstances allow,” she says. “The biggest difference as an author during the pandemic has been the suspension of in-person reader and author conferences and independent bookstore events. I find being without those incredibly isolating. My first flight that I’ve scheduled in more than a year is to go to the Killer Nashville conference in August, and I can’t wait!”